Barnaby Joyce’s airport snafu. Is Deputy Prime Minister Barnaby Joyce going to be the next to feature in a tortured apology video for disrespecting Australia’s laws? A tipster tells us that Joyce was in Port Macquarie recently and hit a bit of a snag at the airport when he went to board his charter plane to move to the next stop on the campaign trail. We’re told a report was made “for not going through Commonwealth security screening and walking straight out onto the tarmac. AFP argued with local airport officials for pulling him up, until he finally agreed to go through commonwealth screening process.” Joyce’s media people say they had no issues at the airport and went through security as requested. And we were so looking forward to a Joyce channelling Johnny Depp on video.

Vote for Ted. We’ve previously noted that the Liberal candidate up against Bill Shorten in the seat of Maribyrnong has a fair bit of pluck, regularly setting up his street stall in front of the Labor leader’s office in his attempt to put in a good show in the face of an 11% margin. A tipster sent us this photo of one of Ted Hatzakortzian’s billboards — on the side of a disused, vandalised petrol station. It’s not great symbolism, but we love the well-taken photo (check the reflection in the puddle). 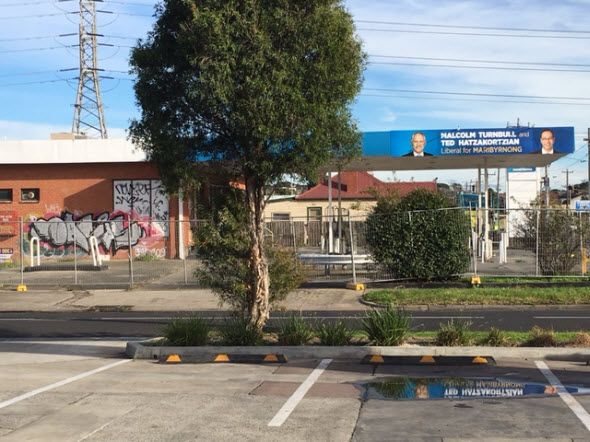 Art imitating life. Melbourne’s Malthouse Theatre has announced that it will continue with its production of The Events next week, despite its storyline being very close to the events of the Orlando nightclub shooting.

“In light of the recent acts of violence that occurred against the LGBTQI community in Orlando, Florida, Malthouse Theatre expresses sincere condolences for the victims of this tragedy and their families and friends.

Matthew Lutton, Malthouse Theatre’s Artistic Director and co-CEO says, ‘The Events was written by playwright David Greig in 2012 as a response to the 2011 tragedy that occurred in Norway and devastatingly, his play is still as resonant today as it was five years ago.’

He continues, ‘Whilst we are not in a position to comment directly on the situation in Orlando, Malthouse Theatre expresses our extreme sadness that acts of violence and hate continue to occur. The works that we present on our mainstage are reflections on our contemporary world, and when The Events was programmed mid-year last year for presentation on our mainstage, no one could have anticipated that this calculated act of violence and hatred would occur.’

Malthouse Theatre confirms that the production will open next week as originally scheduled, but acknowledges and is deeply saddened by the unfortunate circumstances. Our thoughts are with those affected by the Orlando tragedy.”

In the US the season premiere of The Last Ship was delayed on Sunday night because its storyline featured similarities to the shooting.

How to vote, according to the Christians. One Crikey reader was lucky enough to pick up the voting instructions from Fred Nile’s Christian Democratic Party. The party’s preferences are not very surprising but our tipster took issue with the bold, underlined, all-caps instruction: “DO NOT COMPLETE BELOW THE LINE”. The instruction is correct — but can be phrased more gently. The Liberals’ say “No need to number the boxes below the thick black line”. 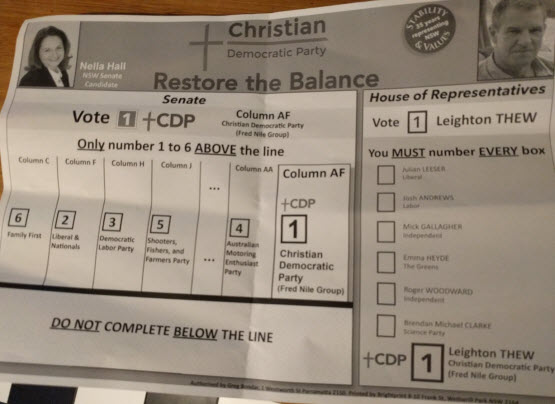 “But if you were under the impression that praise-worthy journalism is somehow inoculated against campaigns like Thiel’s, you’d be mistaken. Last week, Thiel’s lawyer-for-hire, Charles J. Harder, sent Gawker a letter on behalf of Ivari International’s owner and namesake, Edward Ivari, in which Harder claims that Feinberg’s story was “false and defamatory,” invaded Ivari’s privacy, intentionally inflicted emotional distress, and committed ‘tortious interference’ with Ivari’s business relations. Harder enumerates 19 different purportedly defamatory statements — almost all of which were drawn from several publicly available lawsuits filed against Ivari.”

What’s NXT? An Adelaide tipster has received this flyer from Nick Xenophon, including photos of his “real people” and also a request for donations on the back page. 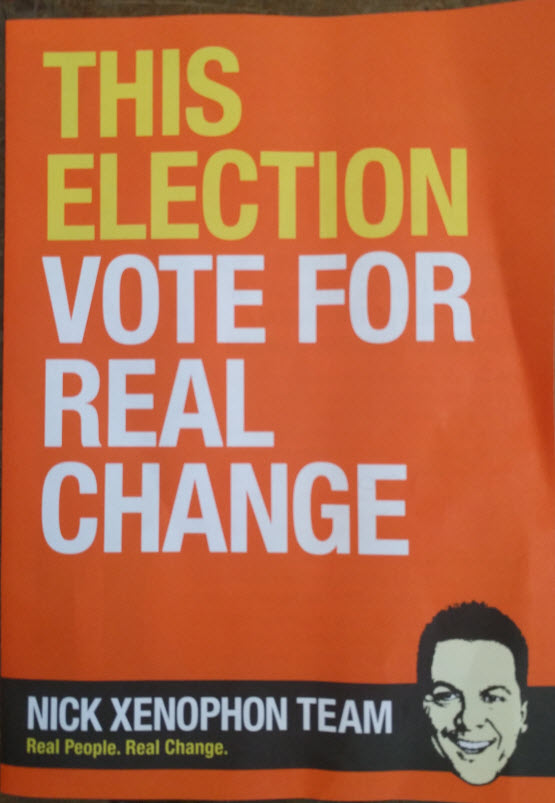 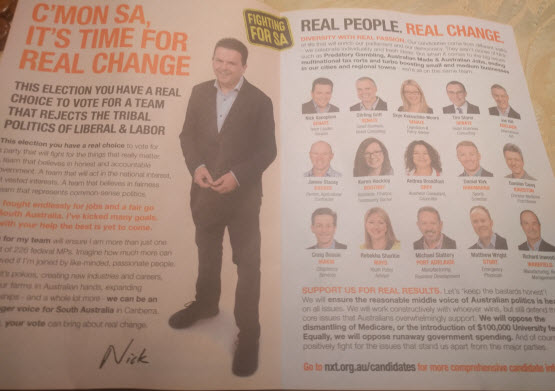 Barnaby didn’t need to go thru (useless) security for a number of reasons:-
1) it was a charter flight
2) aircraft under 20 tonnes.
If you follow the stupid line of thinking in this article, every passenger on every Rex flight would need to go thru security.
NOTE: Rex’s Saab 340’s are all under 20 tonnes MTOW & security is not required except at dodgy airports like Dubbo, BNE, SYD, ADL, MEL where they use main terminals.