The politics of hatred

Donald Trump left out a few key points in his reaction to the Orlando massacre, so we have helped him out. 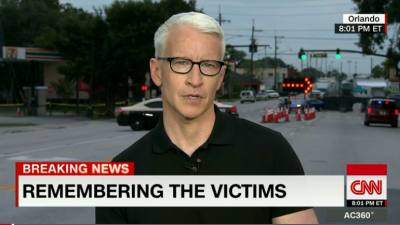 CNN’s Anderson Cooper’s emotional tribute to the victims of the Orlando massacre is worth watching in full.

What is not worth anything at all is Donald Trump’s disgraceful reaction to the terror attack, doubling down on his call to ban Muslims from entering the United States and, bizarrely, banning journalists from one of the best newspapers in the country, The Washington Post, from covering his campaign. His initial statement focused on “radical Islamic terror” and immigration (although the murderer was born in America) and completely ignored the fact that the victims were specifically targeted because they were LGBTI. We have fixed it for him:

Last night, our nation was attacked by a radical Islamic homophobic terrorist. It was the worst terrorist attack on our soil since 9/11, and the second of its kind in 6 months. My deepest sympathy and support goes out to the victims, the wounded, and their families.

In his remarks today, President Obama acknowledged that the victims were targeted because of their sexuality and reminded Americans to protect and look after each other regardless of race, religion or sexual orientation. disgracefully refused to even say the words ‘Radical Islam’. For that reason alone, he should step down. If Hillary Clinton rightly condemned inflammatory anti-Muslim rhetoric after this attack, still cannot say the two words ‘Radical Islam’ she should get out of this race for the Presidency.

If we do not get tough and smart real fast stop spreading fear and hatred, we are not going to have a country anymore. We can’t afford to be politically correct anymore demonise the Muslim community and ignore acts of homophobic violence.

The terrorist, Omar Mir Saddique Mateen, is the son of an immigrant from Afghanistan who openly published his support for the Afghanistani Taliban and even tried to run for President of Afghanistan a terrorist with a history of domestic violence, racism and homophobia.

It really isn’t helpful to minimise the radical Islamic element of this atrocity either.

Agree with your main point, but its worth remembering that KKK and other racist Groups Have Killed More People Than Islamist Terrorists in the U.S. Since 9/11

As an indication of the cog/dis of islam which, like Judaism, claims to believe – as per the ‘divine’ texts – that “woman comes from Man, not man from Woman”, similarly the homophobia comes from religious delusion.