Abbott in Goldstein ... preferences revealed ... who is smearing Graham Perrett? ...

Who is behind druggos for the Geens? Voters in the Queensland seat of Moreton have received this flyer over the last few days, attacking the Greens and also Labor MP Graham Perrett for his writing career. Perrett has published two novels so far, featuring some racy moments, and there’s a third book of the series on the way. It’s not the first time Perrett has been attacked over the books, with similar flyers distributed at the 2010 and 2013 elections. This flyer was authorised by a “Chris Howard” at a Stafford business address. Crikey called the business and was told that all media enquiries should be sent to a lawyer’s email address. No questions about who Chris Howard is were answered by the lawyer or the business.

Quoting quandary. Queensland MP Warren Entsch was so keen to share his words of wisdom over the weekend that instead of sharing the quote from Cicero with just his Coalition colleagues, the missive was sent by a staffer to all lower house MPs. According to the email, “he has used this at various functions and it has been well received by those in attendance”. The full quote is:

“The budget should be balanced, the treasury should be refilled, public debt should be reduced, the arrogance of officialdom should be tempered and controlled, and the assistance to foreign lands should be curtailed lest Rome become bankrupt. People must again learn to work, instead of living on public assistance.”

The added problem is, that there’s no substantive evidence Cicero ever said it, but he did express similar sentiments. Although the quote was attributed to the Roman philosopher and politician by US Congressman Otto E. Passman in 1966, and since reported on as such, a few websites that investigate such quotes say that original source material connecting the quote to Cicero can’t be found. 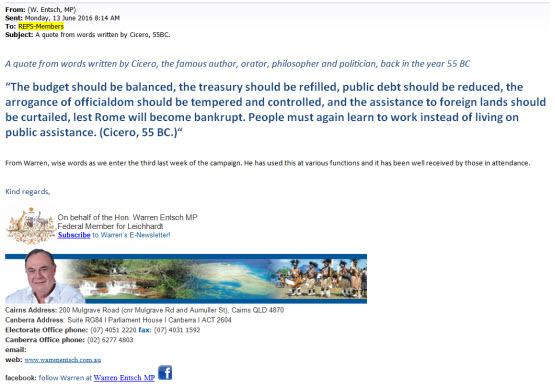 Selective debates. While the seat of Higgins in Melbourne has become a Liberal-Greens fight, the seat directly to its south, Melbourne Ports, is more a fight between Labor and the Greens. Labor MP Michael Danby has had a go at the Greens Steph Hodgins-May calling her “culturally insensitive” for “doorknocking Jewish houses in Caulfield & East St Kilda on Shavuot, last Thursday night”. The courting of votes in the electorate’s Jewish community has been a hot-button issue, with Hodgins-May pulling out of a debate to be hosted by the Australian Jewish News and Zionism Victoria. She has, however, agreed to take part in a debate hosted by the Australasian Union of Jewish Students on June 30. Crikey asked Hodgins-May why she had agreed to this event and not the AJN event and was told:

“I’ve accepted numerous invitations to engage with Jewish organisations throughout this campaign including from Mount Scopus, Habonim Dror, Jews for Refugees, Limmud Oz and most recently AUJS and have had lots of conversations with Jewish and non-Jewish voters.

My decision not to attend the other forum is the only exception and that is because of specific statements made by one of the organisers about the UN that I, as someone who has worked at the UN, did not feel comfortable associating myself with.”

Who is the Prime Minister again? The editors at the Hobart Mercury had a bit of a difficult day on Friday. With the front page dedicated to the Prime Minister and Opposition Leader in town to show support for those affected by the floods, the News Corp paper had a great chance for a good front-page photo op — the only problem is that the paper said that “Prime Minister Tony Abbott” was in Tassie to show support. The picture of Turnbull was captioned correctly, but the copy wasn’t. Our tipster says “has Eric Abetz become an editor for the paper or is it a past ideal or an example of foresight?” 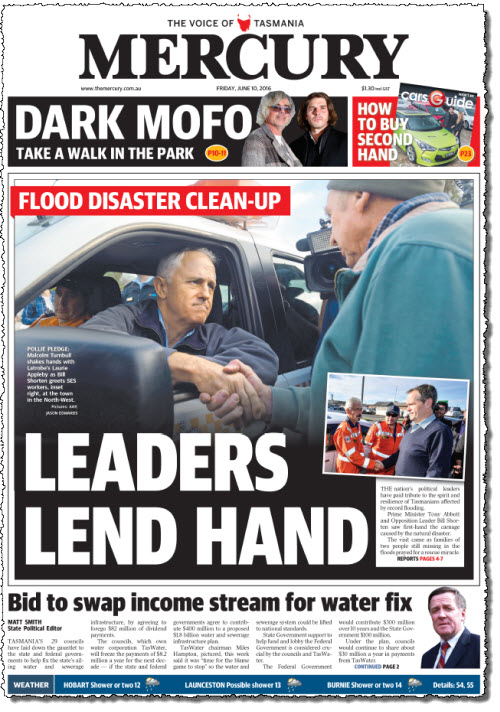 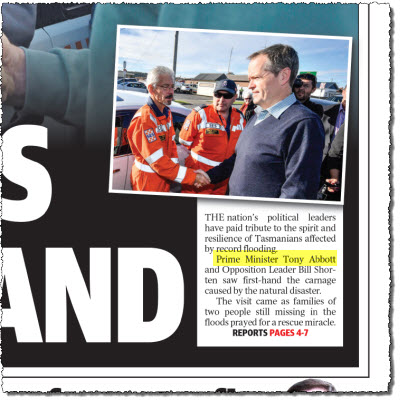 How to vote? With pre-polling centres opening today, we have started to get an insight into how the parties are directing their preferences, especially in the Senate, where voters must now number at least six boxes above the line (in the past only one was required). Accordingly, parties are now including five other parties on their how-to-vote cards, but some are using the opportunity to completely ignore other rivals.

In Victoria, the Labor party is directing its preferences to the Sex Party, followed by Derryn Hinch’s Justice Party, the Renewable Energy Party, the Greens and the “Science Party/Australian Cyclists Party”. Labor’s candidate for the seat of Melbourne, Sophie Ismail, was challenged on Facebook on why the party was preferencing Derryn Hinch’s party so highly in the Senate, to which she said: “I’m seeking election to the Lower House — I’ve had no input into the Senate preferences. Sophie”

In NSW, Labor is preferencing the Greens, the Renewable Energy Party, Animal Justice Party, the Australian Sex Party and then the Liberal Democrats. Also in NSW, the Liberals are preferencing Fred Nile’s Christian Democratic Party second, followed by the Shooters, Fishers and Farmers, Family First, Liberal Democrats and the Motoring Enthusiast Party. In Queensland the LNP is preferencing Family First, the Christian Democratic Party, the Shooters, Fishers and Farmers Party, Katter’s Australian Party and the Australian Christians. The full list of Liberal Senate how-to-vote cards is here.

Seen any other how-to-vote cards? Send them to us here.

Abbott campaigns for Freedom Boy. Former prime minister Tony Abbott was spotted at the Highett train station in Melbourne’s south-eastern suburbs this morning, handing out how-to-vote cards for the Liberals’ Tim Wilson, who is hoping to replace former trade minister Andrew Robb in the seat of Goldstein. “He is even shorter in real life,” says our tipster.

Wood plays chicken. A tipster tells us that Liberal MP Jason “orgasm” Wood, who holds the marginal seat of Latrobe by 4%, has refused to attend a candidates forum to take place at a local church tonight:

“It was not surprising when someone suggested a candidates forum to offer our town the chance to put questions to the candidates. However what did surprise everyone was the sitting member Jason Wood (Liberal) refusal to take part.

“Last week organisers upped the ante and encouraged locals to leave a polite message on Wood’s Facebook page asking him to attend the forum. The messages where deleted immediately and the authors banned. One lady commented on the forum’s Facebook page ‘Why would my local member ban me for simply asking a question?’

“It’s not the first time Wood has played this game, the Dandenong Ranges chapter of The Friends of the ABC held a function recently where Wood was represented by an empty chair with his name on and in the 2013 Wood made only one public appearance, that was an event for the ACL where he stood against marriage equality. The ACL appearance is interesting as since being elected in 2013 (he lost the seat to Labor’s Laura Smyth in 2010) he has backflipped claiming he never had a firm opinion on marriage equality and if put to a vote in parliament would vote for or against depending on how his electorate supported it. In the 2013 campaign Wood refused several invitations to a range of candidate events covering subjects such as environment, education, NBN.” 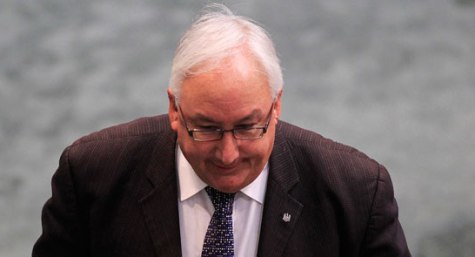 The myrmidons of the mudorc just cannot let go of the Clown Prince Over the Water syndrome – that’s why when the loyal toast is taken at many tory conflabs across the nation the waiters are instructed to remove the glasses of water first.