How did Labor's savings plan play in the electorate? It was hard to pick a winner of the long weekend.

Bernard Keane, Crikey politics editor: Lots of activity from the parties over the long weekend, but how much attention voters were paying, even compared to normal, is the question. By focusing on broadband, Labor drew attention to one of Malcolm Turnbull’s, and the Coalition’s, greatest debacles. Bill Shorten also performed well on Q&A last night, even though the questions were mostly user-friendly. And how about that shameless taking out of the fiscal garbage on Friday? A small win to Labor.

Dr Zareh Ghazarian, political scientist at Monash University and author: It was a good weekend for Turnbull. For probably the first time in the campaign he was able to make strong attacks on Labor and Shorten on economic management which suits the Coalition.

Eva Cox, writer, feminist, sociologist, social commentator and activist: A long, somehow very long weekend electorally with limited action; nothing really to attract general voters’ attention: more bickering about the National Broadband Network and re-announced Barrier Reef spending. Interesting absence of broader visions, given it was the last chance to catch the attention of early absentee voters, who can do it from today. Niggles about the accuracy of deficits just seem to add to turnoff.  The Greens have filled gaps, like their announcement of better welfare payments, but Shorten on Q&A last night made it quite clear that even age pensioners would get no increased rates. Tough if you are on Newstart; some victims of areas of unfairness are obviously not mentioned by either major party. Shorten won, maybe by a short head, for answering some hard questions on TV.

Simon Breheny, director of policy at the Institute of Public Affairs: The Coalition doesn’t win elections off the back of environmental policy. The Coalition has strong brand equity but it’s in other areas: chiefly, the economy, and law and order. So the announcement that the Coalition will spend $1 billion on the Great Barrier Reef makes little sense politically. Still, it’s money redirected from the Clean Energy Finance Corporation so at least they’re being more fiscally conservative than Labor and the Greens. Labor might have won the day for that reason but the decision to massively increase the cost and time involved in the rollout of the NBN white elephant is terribly wasteful. Default Coalition win.

Trisha Jha, policy analyst at the Centre for Independent Studies: The Liberals have made themselves a small target this weekend, with the exception of a few giggles over their brothel-owning candidate and Turnbull’s venture into Snapchat. Labor’s taken up the available space, with Shorten going around the country on a charm offensive, kissing babies, taking selfies and meeting children. The past few days have seen Labor seriously cut back on several previously maintained big-spending policies, including on the NBN, but it seems to have deflected. Or maybe that’s just because most normal people were enjoying the weekend. This one goes to Labor. 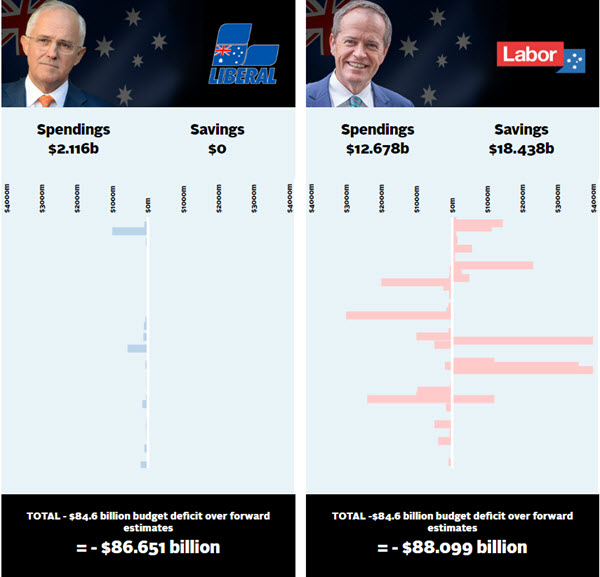 There were several reasons for these discrepancies. Firstly, there was the question of time periods; some referred to savings over the medium term (10 years) while others looked at the forward estimates (four years). Secondly, Bowen included in his assumptions savings measures which had already been announced, such as those stemming from changes to negative gearing and the capital gains tax; others didn’t. And lastly, there was the issue of the “zombie cuts”: savings measures previously introduced by the government which have yet to pass the Senate, which Labor has refused to support since the 2014 budget.

Labor announced it would continue to oppose some of these bills but would support some of them; this lead to discrepancies between reported figures as some incorporated these zombie cuts into their bottom line while others didn’t. For our Cash Tracker we have listed new savings measures announced by Labor which, by our count, amounted to more than $3.5 billion as well as the “zombie cuts” they have supported which will not affect the deficit since they are already encapsulated within Treasury’s budget projections.

Labor was also busy when it came to spending promises over the long weekend and made promises related to health, infrastructure and safer housing for victims of domestic abuse. Meanwhile, the Coalition redirected $1 billion to protect the Barrier Reef and announced it would fund a new stadium in Townsville. Which means Townsville will be getting a new stadium, no matter what the final election result is.

“Zombie cuts” which Labor will support:

The Coalition: Malcolm Turnbull is campaigning in Perth today and will tonight dine with some of Perth’s business elite who, The Australian reported, have payed $10,000 each for the privilege of dining with the PM. The fundraising lunch will be hosted by the chairman of ASX-listed company Schaffer Corporation, John Schaffer, at his home in Cottesloe, just back from the Swan River. It is expected to raise $100,000 in donations. Before the dinner he will be campaigning in the marginal, Liberal-held seats of Cowan and Hasluck, as well as the newly created seat of Burt.

Bill Shorten: After putting on a solid, plain-speaking performance on Q&A last night — in which he indicated that Labor would support greater transparency in offshore processing as well as a treaty with indigenous Australians — Shorten will today also be campaigning in Perth.

The Greens: A surprising new poll coming out of the seat of Higgins has shown incumbent Liberal MP Kelly O’Dwyer has lost a significant amount of support and that the Greens’ candidate, Jason Ball, is closing. The Assistant Treasurer gained 54.4% of the primary vote at the 2013 election but this poll has her vote at just 44.1%, while Ball’s is at 24.1%. This result has led to a senior Victorian Liberal telling Fairfax Media that Higgins could be “the Indi of 2016”. It has also inspired the Greens to step up the campaign in Higgins; Richard Di Natale gave a press conference in the seat with Ball today.

Nick Xenophon has attacked the major parties over what he sees as a preference deal to curb his chances of winning in the South Australian seats of Sturt, Mayo and Grey. Both Labor and the Liberals have issued “split tickets”, how-to-vote cards which give two options on who to direct preferences to which will make it harder for the NXT candidates to win lower house seats. Xenophon lashed out at the parties, asking them to come clean on what they had done and labelling them a “duopoly” and a “cartel”.

Tasmanian senator Jacqui Lambie also made an announcement regarding preferences, saying she will not be preferencing any party as she “will not compromise or undermine my network’s independence”.

YOU CAN’T FIGHT HERE, THIS IS AN ELECTION

There was more than one barney on the hustings over the weekend. At the Top Pub in Uralla on Friday evening the Deputy Prime Minister Barnaby Joyce got into an altercation with Liverpool Plains beef farmer Nicola Chirlian, who had previously questioned him on the government’s mining policies on Monday’s Q&A. While there were varying reports of what exactly happened, with one local saying Chirlian was “getting in the face” of the Deputy PM, Chirlian told Fairfax Media Joyce told her to “piss off”:

“He got really quite loud, other people in our group who were in the other room could hear him. He said ‘Nicky piss off, just piss off, piss off”.”

On Saturday, before the dust had settled, two of the Prime Minister’s closest advisers, Senator James McGrath and principal private secretary Sally Cray, argued with a Greens protester, echoing Paul Keating’s “go and get a job” quip. When the protester asked what the Coalition was going to do about the Adani mine, McGrath responded by asking her what she was going to do about jobs and said: “Who pays for your dole? Who pays for your social security?” The woman had not disclosed her employment status and told the Senator that he was being rude. “Excuse me, don’t talk to me like that,” she said before walking away.

Turnbull narrowly edged out Shorten across all mainstream media platforms over the weekend, but the Opposition leader romped home on social media … 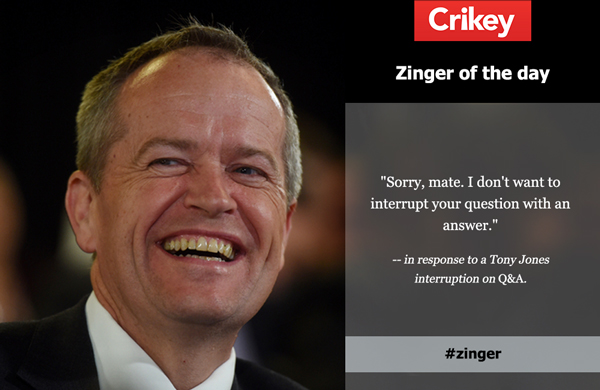 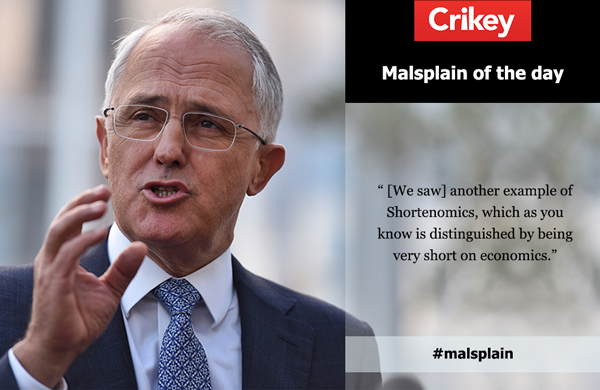 In a move which can only be described as terrifying, Pauline Hanson drove over the major parties (represented as blue and red sedans) in a monster truck on Friday … 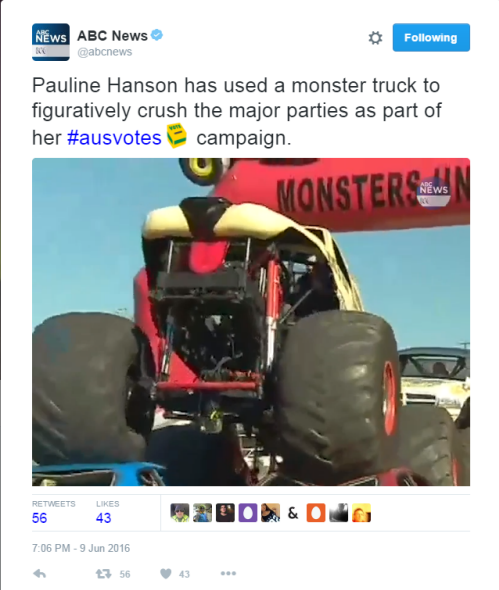 Barnaby Joyce seems to be relishing his brush with Hollywood and had no problems brandishing this colourful campaign poster while taking part in Lateline‘s Poll Position segment, where he also took the opportunity to blast out Jon Fogerty’s Suzie Q … 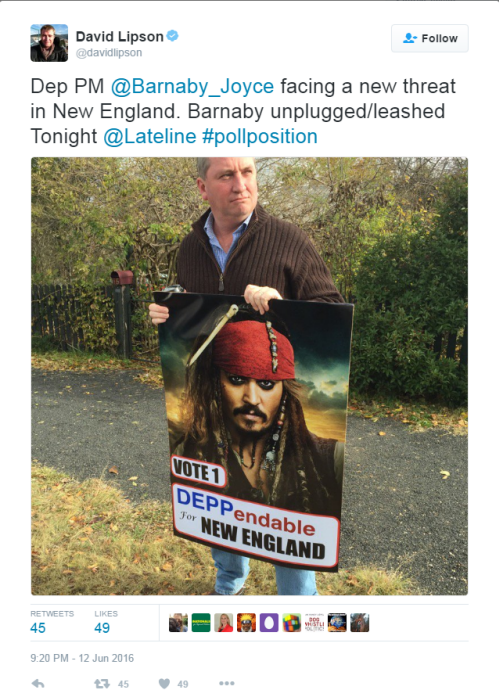 It was hard to pick a winner over the weekend as pundits seem split on how they think voters will react to Labor’s big saving measures. Both leaders are in Perth today.

Why bother having Simon Breheny?

I agree, the IPA isn’t going to ever give they day to anyone other than the Coalition. The other parts of his comment seems out of step with the broader Australian reaction to the Reef and when has a ~2% funding increase to the NBN rollout that massively improves end user outcomes been “Massive”, what would that make of the debt blow outs we have seen under this current “Adult” Government?

I don’t get why he calls the NBN a white elephant, but I suppose it is consistent with conservative politics. Will they ever get that it is necessary infrastructure that improves productivity.

I assume that Breheny is put in as light relief?