Another Marxist down as Deakin sacks Hirst

“What is also very clear to us is that the Murdoch media, and supporters of the Murdoch press, are engaged in trolling campaigns to try to expose left-wing activists and get them in trouble,” Long told Crikey this morning. “And that’s been the case for Martin.”

Hirst and the NTEU have 10 working days to respond to Deakin University’s preliminary decision, delivered yesterday afternoon, to sack Hirst over three tweets the university says breached its academic code of conduct.

Hirst hasn’t been paid since April 19, when the university suspended him after receiving a complaint about a Twitter exchange between Hirst, News Corp columnist Rita Panahi and Lachlan McDougall, a student at Deakin university … 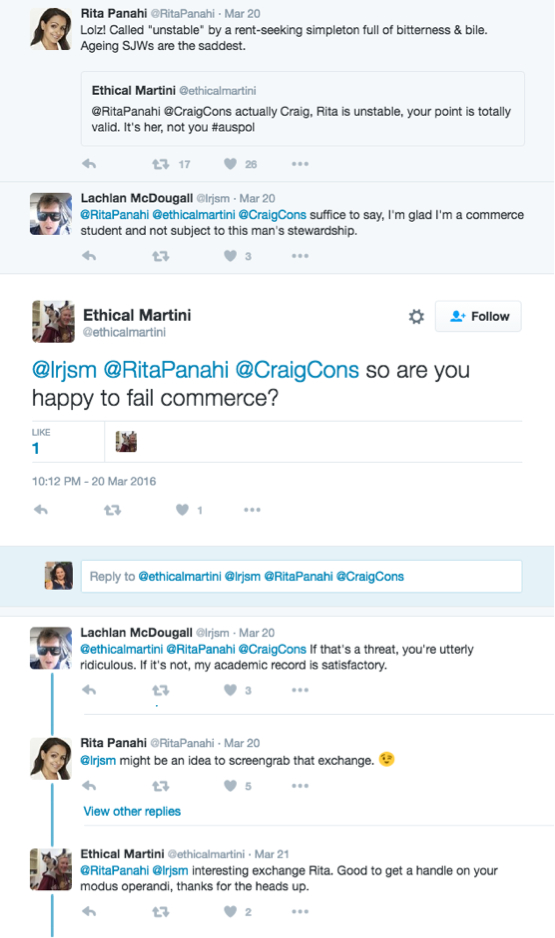 In a letter sent to fellow News Corp columnist Tim Blair and posted on his blog, Panahi writes: “neither me nor the student complained”.

The identity of the complainant has been kept confidential. After receiving the complaint, the university conducted a review of Hirst’s tweets and raised objections to three: the comment to McDougall asking him if he was “happy to fail commerce”, which the university said was an implied threat (Hirst argued it was a humorous comment on McDougall’s academic ability, but that he he did not know McDougall was a student at Deakin), a picture of a “fuck it” beanie that Hirst wrote he would be wearing after the Easter break as a “subtle hint” to his boss (the university said it was offensive and insulting, Hirst says it was a joke), and a tweet about Andrew Bolt’s small Sky News audience to which Hirst wrote “reassuring, masturbating chimps” (the university said this was offensive and inappropriate — Hirst said it was appropriate to the medium and in his area of expertise).

Hirst’s lively Twitter presence does not identify him as an academic at Deakin University, but he is widely known as such, especially after Andrew Bolt in 2014 drew attention to several of Hirst’s more expletive-laden tweets (Hirst was suspended without pay for three months in the aftermath). The post followed Tim Blair highlighting Hirst’s Marxism — Hirst’s profile picture at the time was of him in front of Karl Marx’s grave. He’s been frequently mentioned on Blair’s blog, usually in relation to his political views. In 2011, Hirst wrote on his blog that he’d been thrown onto “the News Limited radar” after his appearance at the Finklestein inquiry. He says shortly after, a Daily Tele reporter called him and asked him if he was or had ever been a communist.

Hirst is only the latest staffer at a university to face unemployment over his social media usage in Victoria. It follows La Trobe’s Roz Ward, another Marxist, being suspended, then reinstated, after she joked in a private Facebook conversation that Australia’s “racist” flag should be replaced by a “red one”.

Long says the circumstances of the Ward case are not identical with Hirst’s. “But both are … symptomatic of universities being much more concerned with their brands and reputations than with protecting controversial speech.”

“In general we think [Hirst’s sacking is] an overreaction to what has occurred.”

Hirst told Crikey this morning he was “angry and upset” over what had occurred. But he was “very heartened by the response on social media”.

Hirst exhibition: what a load of rubbish, cry critics

Will OzCo fund a project critical of OzCo? An artist finds out

Its more than just brand protection. There’s a belief that uni’s are looking for opportunities to move on anyone who is an independent thinker and/or potential trouble maker. And, in their usual psychopathic management style, sometimes they just like to create a ruckus just for the entertainment value. Reinforces their 1960’s thinking.

What a truly sad and worrying state of affairs. Martin Hirst @ethicalmartini was/is a challenging, provocative and often entertaining commentator and thinker on a wide range of current affairs. Do I REALLY, in 2016, have to say that I probably disagree with much of what he says and argues for, but that I absolutely support his right to say it on whatever social media platform he choses? How hard can it be for what used to pass for Universities to say the same thing?

It seems clear from ” Panahi writes: “neither me nor the student complained”.” that she failed grammar in primary skool.

He didn’t even work in the Commerce department, so how could that possibly be a threat?