Labor is set to announce its savings policy today. And Mack Dog gets a chief of staff.

Bernard Keane, Crikey politics editor: With the leaders still in flood-damage tour mode for most of the day, there was no clear winner, but Labor’s budget issue is hanging around like a bad smell. They’ll be hoping they can dispel it today with a brisk, bracing blast of budgetary bad news.

Paula Matthewson, commentator and former media adviser to John Howard: Yesterday on the hustings really began the night before, when the major parties’ respective leaders fronted their preferred interrogator. A curious misstep by Sky News, essentially challenging the Prime Minister to turn up at their next people’s forum, resulted in the pay-TV broadcast having to go ahead without the PM. Despite being well-practised at the town hall setting, Opposition Leader Bill Shorten did well to canvas the 17 questions leveled at him from Sky’s “real people”, although he did stumble on the tampon tax. However, Shorten was considerably tetchy by the last question, which challenged the Labor leader on his party’s me-too asylum seeker policy. Meantime, and not coincidentally, Malcolm Turnbull chose to be subjected to questioning on the ABC. A noticeably less waffly PM had no easier time than his opposition counterpart, particularly when it came to the question of his precipitous fall in the opinion poll approval ratings. Next morning, the leaders abstained from any obvious campaigning as they visited flood-damaged parts of Tasmania. Consequently, the day should have been called a draw. But the butterfly effect emanating from Labor’s Wednesday announcement of burgeoning deficits for the next four years threatened to grow into a gale. The opposition’s claim yesterday that the government’s budget was riddled with “zombie” savings only reminded voters of the economically obstructionist role Labor played during this parliamentary term. This own goal therefore gave the day to the government.

Trisha Jha, policy analyst at the Centre for Independent Studies: The day was a soggy one down in flood-struck Tasmania. Labor’s back-down on the removal of the “tampon tax” (the GST levied on women’s menstrual products) earned Shorten nary a peep from usually quite vocal feminist observers. Meanwhile, Turnbull was hassled by reporters on his Cradle Mountain jacket, in response to which he quipped “it’s warm”. Four stars to both for avoiding any sticky situations — this one’s a tie.

Ian McAllister, professor of political science at the Australian National University: The government made three strategic errors in calling this election. First, they opted for a long election campaign. The experience in Australia and elsewhere is that shorter campaigns tend to benefit the incumbents, longer campaigns tend to benefit the opposition. The reason is that the longer the campaign goes on, the more voters scrutinise the government’s performance and become critical of it. In a short campaign, voters are less likely to take risks and will go for the “devil they know”. The optimum time for the Coalition to call an election was in Turnbull’s first 100 days as Prime Minister, i.e. in late 2015 or early 2016. Second, bringing down a budget immediately before calling an election isn’t a fatal error, but if you alienate a sizable minority of voters in the process, then you’re courting unnecessary risk. The Coalition did this with the introduction of retrospective legislation on superannuation. This will undoubtedly rebound against them in a protest vote by Liberals in the Senate. Third, calling a double dissolution election is a huge risk unless the government is clearly ahead in the polls — which it is not. Our Australian Election Study surveys have found that the proportion of people who split their votes between the Representatives and the Senate has been increasing incrementally. When we first started tracking this in 1987, 12% split their votes; in 2013 the figure was 22%. Because of the superannuation policy debacle, I would expect this figure to increase significantly in 2016. The net effect will be that the government — even if it wins a majority in the House of Representatives — will not control the Senate. This is because of (1) the lower threshold for election in a double dissolution election and (2) an increased protest vote in the Senate.

Eva Cox, writer, feminist, sociologist, social commentator and activist: I’m waiting for the ALP macho “We are not soft” cuts that are planned for later today! After all they, can’t let all this almost soft stuff pollute the economic debate that all serious claimants for the Treasury benches have to show. Even if the election stuff on those areas is boring the voter stiff, neither major party wants to recognise there is more to running a country than a triple-A rating for borrowing.

Spending has ground to a halt at this stage in the campaign.

The Coalition: Back on the trail, after yesterday’s visit to the flood-affected parts of northern Tasmania, Turnbull will today be campaigning in Sydney. He will deliver a lunch address to policy think tank the Menzies Research Centre. Both Treasurer Scott Morrison and Finance Minister Mathias Cormann went on the attack this morning in response to Labor’s upcoming savings announcement. Morrison told ABC radio that today’s announcement would be a “blackflip” and expressed doubt over the credibility of the announcement suggesting that if Labor were to form government with the help of the Greens they would not implement any savings measures. Cormann told Sky News that it was a sign that Labor were in complete chaos and said:

“This is Take Out the Trash Day for Labor. They’re following the West Wing formula here. They’re hoping nobody’s watching as they’re trying to come clean, tidying up some of the messes they’ve made in the past.”

Bill Shorten: Following on from Labor’s admission that their deficits would be greater than the Coalition’s over the forward estimates the Opposition Leader will today seek to gain economic credibility in the eyes of the voters by unveiling a multibillion-dollar budget savings package. In Sydney, he started the day talking to Triple M’s Grill Team, where he discussed the pressures of campaigning. He said he was relaxed and that his election priority is properly funding schools. He then spoke to ABC radio; Wendy Harmer asked if voters would today see “bad Bill”. Shorten said they would see “straight-talking Bill” but refused to outline specific savings measures, which he will announce with shadow treasurer Chris Bowen later today.

The Greens: The Greens have received a big boost after the Council of Small Business Organisations of Australia said that the Greens’ policies on small business were better than Labor’s. The business group will be sending mail-outs during this campaign, which evaluate the three major parties on their small business credentials. They will be targeting the seat of Batman, where the Greens’ Alex Bhathal is campaigning against Labor’s David Feeney. The group’s chief executive Peter Strong told Sky news:

“It looks like the Coalition has the best policy and the Greens have got the best policies and (independent senator) Nick Xenophon, as always, is a small business supporter but Labor – what happened?”

Candidacy nominations for this election closed at noon yesterday and the electoral commission will announce all candidates at noon today. As The Australian reported yesterday, former independent MP Rob Oakeshott is trying to return to Parliament, throwing his hat in the ring for Cowper. Labor’s Anthony Albanese told the Nine Network yesterday that Oakeshott was a decent man but that he’d be surprised if he did run. The Minister for Industry, Christopher Pyne, said that the former kingmaker should “hang up his boots”.

Meanwhile, it seems that Andrew Bolt’s prediction that Australian politics will soon become swamped by militant, feminist, neo-Marxists (or something) appears to be coming to fruition. Following Turnbull’s statement that he is a feminist, the Liberal Democrats have announced that they would “like more chicks to join us”. The party is fielding 47 candidates, three of which are women. How enlightened.

New analysis from Meltwater has shown that the majority of social media mentions of the PM and Opposition Leader on social media were negative. The analysis, which looked at Facebook, Twitter, YouTube and blogs from May 9-30, found that 53% of posts about Turnbull were negative, 25% were neutral and 22% positive. For Bill Shorten 43% of mentions were negative while 35% were positive. It’s worth keeping that in mind when looking at yesterday’s media mentions.

GHOSTS OF GOVERNMENTS PAST

Former Liberal MP Dennis Jensen, who was dumped from his party and is running as an independent this election, has attacked the Liberal Party over their use of the controversial vote tracking software Feedback. The software, which is owned by a major Liberal Party donor, logs every interaction a constituent has with an electorate office and could potentially include details about domestic disputes. This would be of concern to voters, Jensen said.

“Obviously of concern is you have sensitive information in Feedback, that constituents may very well not want you to have.”

Meanwhile, Peta Credlin has attacked Turnbull’s decision to do a Facebook debate instead of attending Sky’s People’s Forum, calling the platform “Mickey Mouse”. Liberal frontbencher Scott Ryan responded by saying that Facebook was hugely popular and that using different platforms was “entirely legitimate”.

New polling from ReachTEL has found that Coalition voters ranked Tony Abbott as the equal worst prime minister in 30 years. The former PM received just 2.3% support from Liberal and National party voters which equaled Julia Gillard’s support. For the Coalition then, perhaps it is for the best that the MP for Warringah is staying in his electorate, for the moment at least … 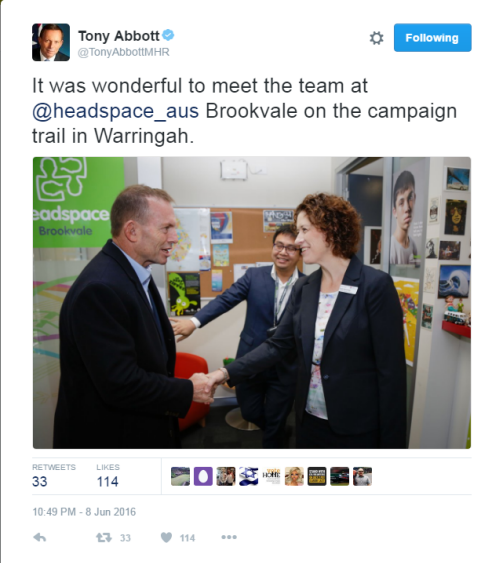 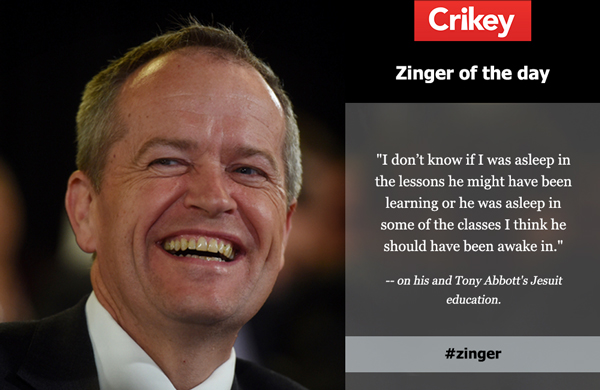 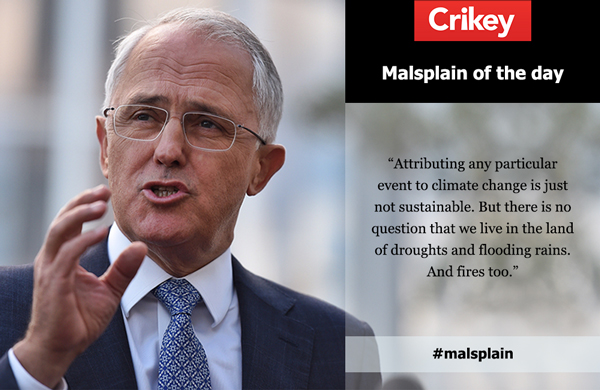 In another case of #auspol meets Hollywood, Ellen DeGeneres has become entangled in Australian politics. The voice of Dory in 2003 children’s film Finding Nemo and star of the upcoming sequel, Finding Dory, recorded a video message urging Australians to take action to protect the Great Barrier Reef.

“As you may remember — but Dory probably doesn’t — she’s a blue tang and has many other amazing species that live in the Great Barrier Reef with her. It’s critical that we protect this amazing place and we’d like your help.”

This lead to the Minister for the Environment Greg Hunt reaching out to Ellen on Twitter; he sent five tweets to Ellen defending the government’s record and inviting the talk show star to visit the reef. As of yet, Ellen, an active Twitter user, has not responded. 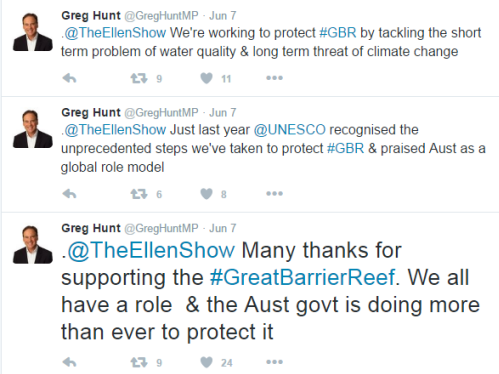 Mack Dog is undoubtedly extremely busy this campaign, being the towering figure of Australian politics that he is. Luckily, he now has a chief of staff to assist him; allow us to introduce Fitzgerald Hunter … 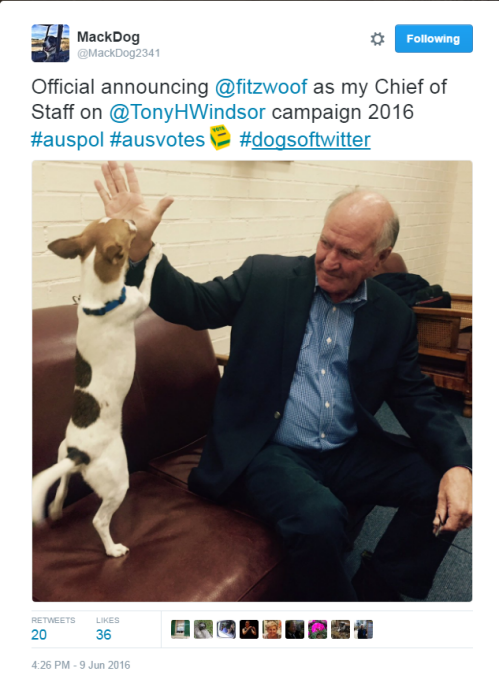 The floods put a halt to campaigning yesterday. Labor will announce tough savings measures today. Mack Dog’s got a CoS.

Well all the above doesn’t matter much. The Deputy Prime Minister of Australia has just told a woman 3 times to ‘PISS OFF’. We should be dragging this monkey over hot coals and tar and feather him for his next leg of his Wombat Trail. I am over this coalition of half-wits…totally! as well as this drawn out constipated election campaign that is torture for the ears of most intelligent voters.

PaulaM – I hope that it “reminded voters of the economically obstructionist role Labor played” in sparing them the devastation of Smokin’ Joe’s horror budgets.