Everyone hates The Briefcase. Plus other media tidbits of the day.

Front page v the homepage. For years, The Age has put its weight behind the campaign for voluntary euthanasia in Victoria.

It’s beautifully profiled those seeking control over the manner of their death, and the topic remains a staple of its news coverage. It’s editorialised in favour of a “healthy debate” on euthanasia. And the paper has published all manner of high-profile Australians urging for change.

Yesterday morning, a parliamentary committee handed down a recommendations for a number of reforms that, if enacted, would give the terminally ill the right to choose to end their lives.

It’s a major win for The Age, and is the report is highlighted on today’s front page … 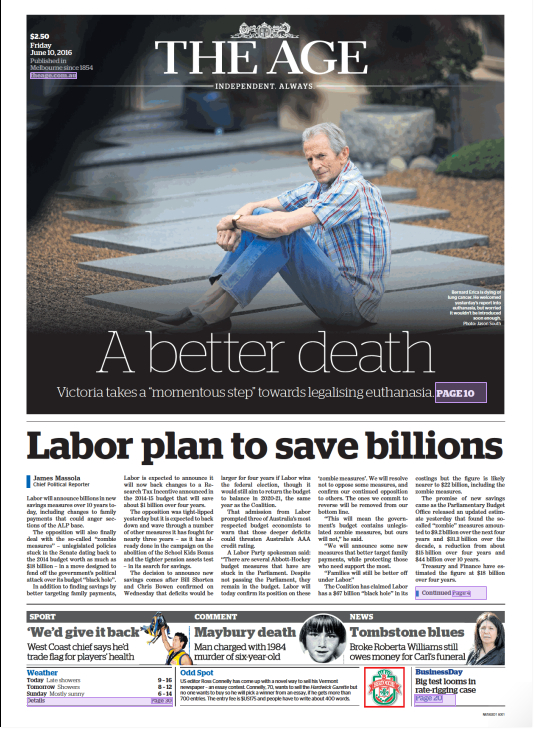 Online yesterday though, it was a different story. Shortly after noon and for a few hours following, the same story that was splashed on the front page was positively buried on The Age’s homepage. We’ve circled it in red below … 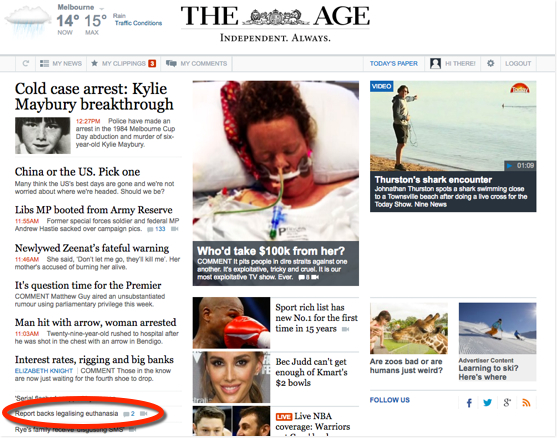 In an interview with TV Tonight’s David Knox, he says it’s harder than ever to get interesting reactions when pranking politicians these days.

“There aren’t as many difficult customers as there were in the old Bill Heffernan, Mark Latham days. Everyone is pretty savvy to the idea that you grin and walk on. Rarely will they say much.

“It’s more like an intentional smile, keep walking, make a couple of offhand comments and don’t engage. That is the standard M.O.

“You have to work pretty hard to get more than that.”

The Chaser’s Election Desk premiered on the ABC Wednesday night, and apart from Tanya Plibersek, who was happy to cuddle a rat the team shoved at Bill Shorten, most politicians studiously ignored the comedians when approached on the campaign trial.

It’s probably not what Nine was looking for when it sent TV critics preview copies of its new show, The Briefcase.

Like much of what’s seen on Australian networks, the show is an adaptation of a (failed) US concept. But Nine thinks it can make it work here.

The Briefcase’s premise is that every week, two families with serious financial difficulties are each given $100,000. Each is then introduced to the other family (without knowing that they also have been given a briefcase full of cash) and over three days, they learn about that family. At the end, they can decide to share some or all of their $100,000 with the other family, or keep the full amount themselves.

The drama and entertainment lies in seeing whether a poor family will choose generosity or self-preservation.

In an interview with news.com.au, Nine head of development Adrian Swift defended the show, saying it was nothing like the American version, which relied on “stunt casting”:

“We’ve cast it completely differently. The core conceit of the show is still there, but we haven’t stunt cast it with dwarfs and drug addicts …

“They’re people like us who have had some major crisis in their life which means they’re down on their luck. A health issue, a farmer who lost their fences and stock in a fire. These are normal people who’ve had some extraordinary event in their life.”

“I’ve seen both. The best I can say of the Aussie version, starting on June 20, is that it’s less bad. Yet still appalling.

“Cloaking itself with the genuine decency of its participants, it peddles the myth of ‘deserving’ and ‘undeserving’ poor. Instead of scrutinising the economic roots of disadvantage, it suggests individual acts of kindness as a solution. As viewers, we’re invited to arbitrate awful situations as we scratch ourselves on the couch. ‘What would you do?’ the promo asks.”

The US version was cancelled after only one season, after brutal reviews and poor ratings. Though on Radio National’s Religion and Ethics Report this week, RMIT journalism academic Alex Wake said she could see the Australian version doing well.

“From all I’ve read and heard about it so far, I think Australians are going to love it. We love the underdog, we love the battler … I think the producers of the Australian version are going to be much more careful.” 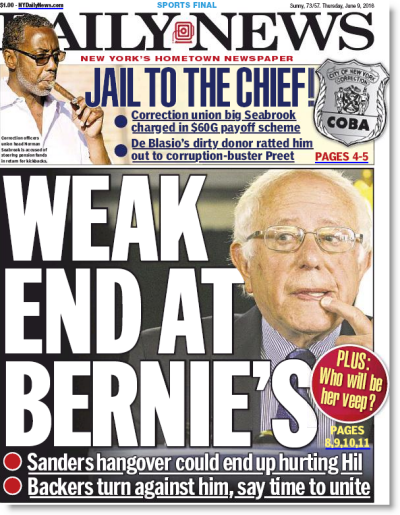