Bernard Keane, Crikey politics editor: Labor was unlikely to win this election, but they may have guaranteed a loss yesterday in admitting their deficits will be bigger over forward estimates. Labor’s economic plan actually makes more sense than the government’s, and the party’s fiscal position is likely to be better over a decade than the Coalition’s, primarily due to the reform of negative gearing and the capital gains discount, and the investment in schools and health makes more economic sense than giving companies a big handout, but in saying deficits would be bigger, Labor has, in effect, endorsed the government’s stereotype of them as fiscally undisciplined. It doesn’t matter that it’s a better use of deficit spending, it doesn’t matter that the Coalition is almost as bad, it doesn’t matter that the 10-year forecasts are better; voters hold Labor to a tougher standard when it comes to the budget and the economy, and yesterday Labor failed that tougher standard. The only thing that might save Labor is that voters weren’t paying enough attention to register their position. Not just a win for the government, it could be the day the Coalition sealed victory. Let’s see.

Jane Caro, author, social commentator and communications consultant: Neither party won yesterday. Nor did they score. It was a nil-all draw after a very scrappy but dull day. Malcolm failed to shake off the “Mr Harbourside Mansion” tag after the #poormalcolm hashtag trashed his (absurd) struggler campaign ad. Give up Malcolm, you are a silver tail, embrace it — like you have feminism. Bill was forced to admit his promises would raise the deficit for four years and so put our triple-A rating under threat. Subsequently, he decided not to remove the GST on tampons. Hmmm! But what chance did either of them have yesterday when all self-respecting political junkies (the only people really paying attention at the moment) were glued to the historic moment when a woman won the Democratic presidential nomination. Taxes on tampons, even Malcolm and other unlikely suspects declaring themselves feminists (could this be because a sizable percentage of women voters remain undecided) just couldn’t get a look in.

Simon Breheny, director of policy at the Institute of Public Affairs: Day 32 of the election campaign had Labor release its 10-year economic plan. The plan involves spending billions of dollars of taxpayers’ money, picking winners, and increasing tax. Will Labor’s economic reformers please stand up? The biggest issue for Labor is that the election is looking like turning on one issue: the economy. And if that’s what voters are thinking about on July 2 the Coalition will have the edge. Another Coalition win.

Dr Dennis Glover, veteran Labor speechwriter and fellow of Per Capita think tank: The last 24 hours or so has revealed something of the extraordinary unreality of this campaign. The Liberals have zeroed in on two aspects of Labor’s perhaps unwise and unnecessary economic plan (the Hawke-Keating era is over guys, you don’t have to do big picture economics anymore): the admission that there will be forward budget surpluses and the plan’s 10-year timeline. This is despite the fact that the Liberals themselves have promised future deficits (even with their nonsense “zombie” spending cuts) and have a 10-year plan for business tax cuts to stimulate jobs and growth (something no serious economist now believes will actually work). My guess is that the leaders of neither party even know what 10-year promises were made in 2006 — the electronic files having long been wiped from hard drives as well as memories. The whole thing has become a shadow play that disguises what’s really going on behind the scenes and will bear absolutely no relation to what happens after the election is won and lost. (Believe me, they understand this too!) Best to ignore it all and make a choice based on your values: are you for business or for the people? That’s the only real choice you have. No winner.

The spend-o-metre is still ticking, though not at the same rapid pace it was over the last couple of weeks. The government is spending money to fight illegal, untaxed tobacco while Labor has trumped the Coalition with a big promise in Eden-Monaro. 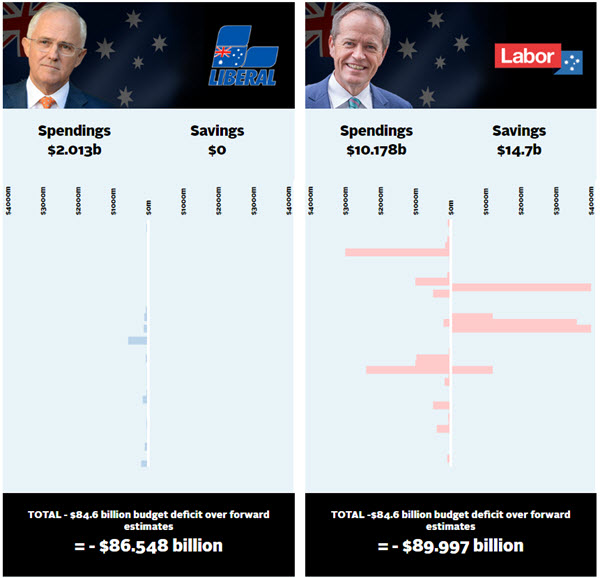 Malcolm Turnbull: The PM headed to Tasmania today to visit the flood-affected areas and thank the local emergency service workers. He toured the town of Launceston in the seat of Bass with local member Andrew Wilkie and Tasmanian Premier Will Hodgman, where they inspected the damage caused by the swollen Tamar River and flagged assistance to those impacted by the disaster. Then it was across to Devonport, where he announced the activation of the national disaster relief and recovery arrangements, which included joint state and federal funding of $19 million.

Bill Shorten: Bill Shorten joined Turnbull in Tasmania as the two leaders put their differences aside to bring attention to the terrible conditions residents are facing as they rebuild from the devastating weather. He began in the north-western town of Devonport in the seat of Braddon before he traded places with Malcolm Turnbull and headed over to the seat of Bass in Launceston. Despite the very non-political nature of today’s campaigning it should be noted that these are both key marginal seats that Labor are targeting this election.

The Greens: Senator Sarah Hanson-Young joined Melbourne MP Adam Bandt in his home town to announce the Greens childcare policy, which they say will offer “universal access” to Australian families. Under the proposed plan there would be a guaranteed minimum of 24 hours of subsidised care offered to every Australian family each week.

Independent member for Indi and leader of regional Australia’s own orange uprising Cathy McGowan seems to be much more likeable than former Liberal MP Sophie Mirabella. So much so that she can get away with claiming credit for securing $800 million in funding for Indi, even though much of that money would have probably come regardless. Mirabella was quick to point out that McGowan didn’t deserve credit for these accomplishments as they were largely the work of the government. On the other hand, the electorate was quick to boot Mirabella when given the chance, so it probably doesn’t matter if she’s right.

A good day for Bill Shorten — he claimed a clear win in the numbers game yesterday. Turnbull’s press and internet figures were good, but Shorten dominated television. Meanwhile it was a fairly quiet day for Richard Di Natale. 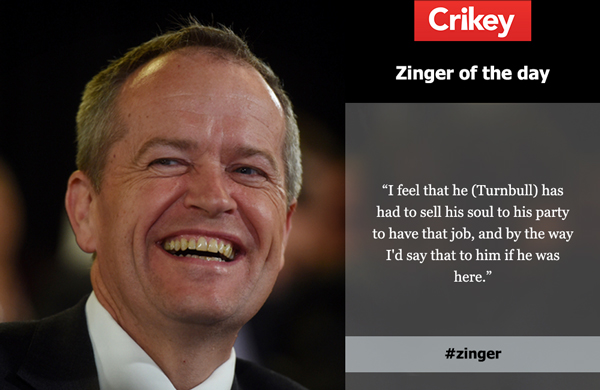 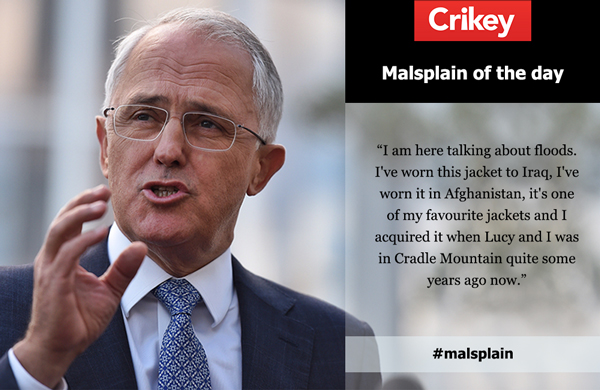 Bill Shorten was the obvious winner in last night’s Sky News People’s Forum, where he presented his message far more clearly than Malcolm Turnbull. Mind you, Shorten had the slight advantage that his opponent didn’t actually turn up. Instead, Turnbull appeared on the ABC’s 7:30 program to face off with his new sparring partner, Leigh Sales. She put a stop to any Malsplaining attempts in their previous meeting so he was much more cautious this time. He defended himself against recent poor polls and resumed his criticisms of Labor’s “war on jobs”. Turnbull refused to back down from his attacks on the opposition’s economic plans after Sales suggested he was exaggerating.

“They are standing in the way [of jobs] and I assume they want to do what they are doing,” Turnbull said.

As for Shorten, he answered questions on superannuation, asylum seekers and even agreed to do a Snapchat Face Swap for an audience member. His biggest focus, however was Labor’s new 10-year plan on business, investment, industry and budget repair. While he faced a tough time over economic policy, he claimed the points on environmental issues by once again going after Turnbull’s lack of action on climate change.

Liberal MP Andrew Hastie has only been in the Parliament since last September, but he’s already found himself in hot water. The former special services soldier has been dismissed by the Army Reserve after he used images of himself in uniform on campaign posters. The Member for Canning was selected by Tony Abbott as a “captain’s pick”, in one of his last decisions as prime minister, to contest the Canning byelection. Despite a significant swing against the Liberal Party, Hasite held the usually safe Liberal seat fairly comfortably. 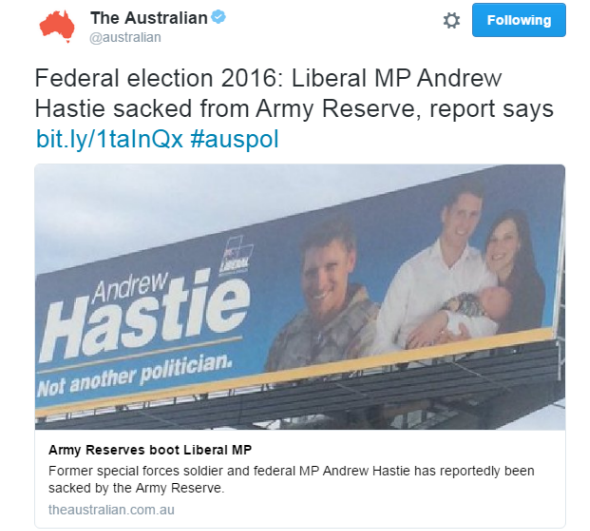 Labor leader Bill Shorten has abandoned his previous calls for an end to the so-called “tampon tax”. Last year Shorten called for the Abbott government to support the removal of GST on women’s sanitary products like tampons and pads. There’s been an ongoing controversy over the classification of sanitary products as “luxury” items, which Shorten had previously flagged for reform. Regardless of what money the tax might raise, the nation’s budget is set to be printed in red ink for some time yet.

First it was Julie Bishop and her Kanye style, now Treasurer Scott Morrison’s gone cray cray for Tay Tay and zealous about Zoolander. He believes the government’s economic policy is the male model of money. It’s really, really, ridiculously good looking, and if anyone argues with him, he’ll just shake it off. He wasn’t so kind about Labor’s new economic plans, he gave this rather cruel #sickburn:

“That’s the sort of economic plan that Derek Zoolander would put together. It’s a picture book, it’s not a plan. What you need sensible, costed, funded economic plan.  There are more pictures in this document and fewer words than there was in the 1989 Taylor Swift CD. It’s not a serious plan.”

Liberal MP Andrew Nikolic was about as subtle as a sledgehammer when he toured Launceston with Malcolm Turnbull today. Or maybe he just wants to make sure no one picks up his jacket by mistake. 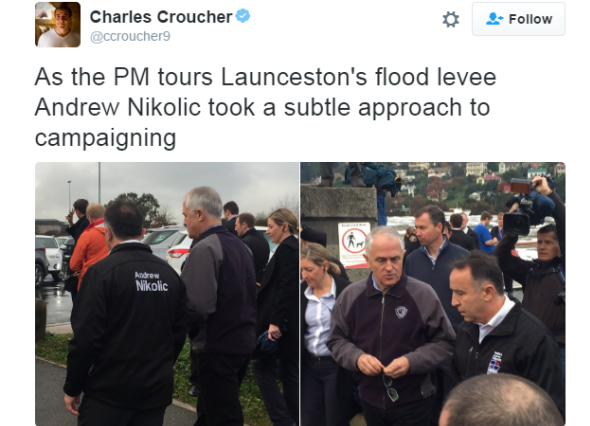 Australian journalist Latika Bourke is currently in London, but she’s clearly kept a close eye on what’s happening back home.

Both Turnbull and Shorten were in Tasmania to thank emergency workers and support the victims of flooding. Back in Melbourne, the Greens unveiled a new childcare policy.

There is a (funny) error in this piece – the local member for Bass, which includes Launceston is Andrew Nikolic not Andrew Willie.

Turnbull explaining where he purchased his favourite jacket is surely the most interesting statement to pass his lips in the campaign to date.

And dare I suggest it’s the most accurate.

Please Crikey keep those comments on Who Won the Day? coming from Simon Breheny. They’re much funnier than Bill’s Zingers or Malcolm’s Malsplaining. I get a huge giggle out of his vote for the Coalition every single time.

Just on this, Jane Caro: “Bill was forced to admit his promises would raise the deficit for four years and so put our triple-A rating under threat.”
Really?
Nobody takes any notice of projections. Certainly not the ratings agencies. They look at what is delivered.
The heads of Treasury and the Finance Department said in the 2013 PEFO that if the pre-election settings continued, the deficit in 2015-16 would be -$4.7 billion and the surplus in 2016-17 would be +$4.2 billion.
Immediately after the election, all those settings were changed.
Outcomes now – according to this year’s PEFO – are a deficit in 2015-16 of -$40.0 billion and another deficit in 2016-17 of -$37.1 billion.
If there is any risk to Australia’s ratings, that deficit blow-out of $76.6 billion – in less than three years – is why.