Ceasefire in Labor’s war on business. If you have a lazy $10,000 today and you’re in Sydney, why not head along to Hyde Park and meet some senior shadow ministers? In the middle of the big business lobby’s efforts to portray Labor as anti-business, Labor’s fundraising arm, Labor Business Forum, is holding a “Business Exchange” all day today, in which you can meet a range of ministers and hear presentations from Catherine King, Kim Carr, Chris Bowen and Jason Clare. The highlight, though, is a cocktail event with the whole ministry, led by Bill Shorten and Tanya Plibersek at 6pm. It’s unusual for an event like this to occur during a campaign, since shadow ministers will have to fly in to Sydney from their campaigns — notionally at the party’s expense, not taxpayers’ — and then fly back to their campaign locations. Happily, at least Labor will tell us who showed up — eventually. Labor reveals any donations or other contributions above $1000, but we’ll have to wait until February to find out who’s there today. But the timing of the event raises the question — is Labor doing it tough financially in this epic campaign? 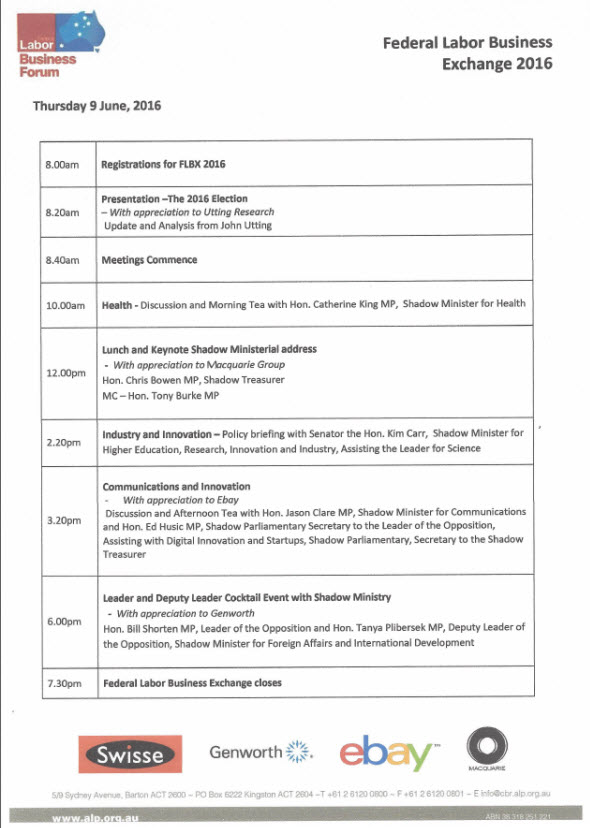 Green pulls out of Melbourne Ports debate. The Greens candidate for Melbourne Ports has pulled out of a debate hosted by the Australian Jewish News and Zionism Victoria, after she was told by a journalist about the Zionist group’s involvement. As Crikey reported yesterday, Steph Hodgins-May was set to appear alongside Labor MP Michael Danby and Liberal candidate Owen Guest at the debate, but she has since alerted the newspaper that she will not be taking part.

AJN editor Zeddy Lawrence has told Crikey that Hodgins-May is “being a little economical with the truth”, and shared an email from May 30 in which he told her the newspaper was “teaming up with” Zionism Victoria as co-hosts of the event. He followed up shortly thereafter with a second email correcting a typo in the organisation’s name in the first email.

Lawrence also told Crikey in an email “it’s rather reminiscent of the incident with Greens leader Richard Di Natale last year when in an interview with us he endorsed recognition of Israel as the Jewish State, and then a few days later, was forced to backtrack and admit that’s not what he meant at all”.

The no-show has been reported in the Australian Jewish News as “Greens candidates will attend an election forum hosted by the Australia Palestine Advocacy Network (APAN), but not Zionism Victoria.”

It quotes Hodgins-May saying “I don’t believe it is appropriate and right to speak at an event co-organised by a politically active organisation”.

And we thought the Liberals were bad at preselecting women. The Liberal Democratic Party was very late to include controversial lead SA Senate candidate Roostam Sadri on a list of its 2016 election candidates. Maybe he was been too busy dealing with an AFP investigation into a $500,000 donation he made the Lib Dems, and two pending charges of flying without a pilot’s licence to bother sending in a mug shot. Current LDP Senator David Leyonhjelm, presumed running, was also missing from the original list, but has now been added.

But something else about the page caught our interest. Every one of the 30 Senate candidates listed is a man. There are just three women running in the lower house, and they were only added since we pointed out the lack of women yesterday (the party says it would like “more chicks”). 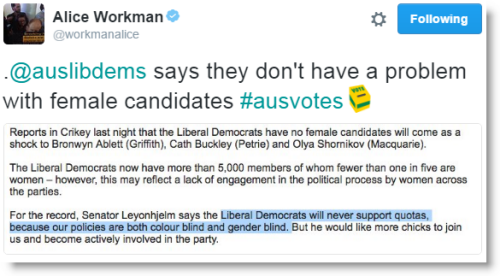 And that’s not all. For a party that promotes privacy from the state, we were surprised that the birth dates of all the candidates were listed. And then we were just confused by the profiles of Sam Kennard and Connor Whittle, both of whom appear to have been born this year. The birth dates have since been removed. 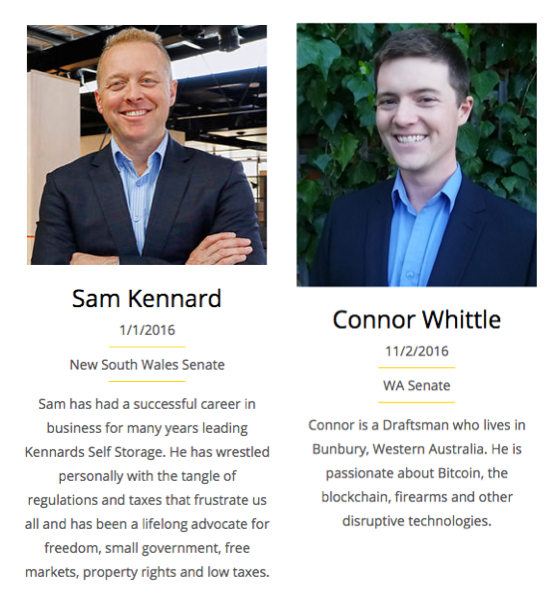 Daily Tele‘s not-so-exclusive. It was a day of exclusives at The Daily Telegraph yesterday, with the front page featuring a magnificent picture of a shark at Newcastle beach, along with news of the drop (or lack thereof) in violence due to the controversial lockout laws. Andrew Clennell’s yarn got the red ink treatment, and was continued on page 2. The story quoted Bureau of Crime Statistics numbers and the agency’s boss, Don Weatherburn. As soon as 2GB got Weatherburn on air though, he poured cold water on the idea that the Tele had given its readers a scoop. “This information was made public six weeks ago in a big public seminar,” he said. Better save that red ink. 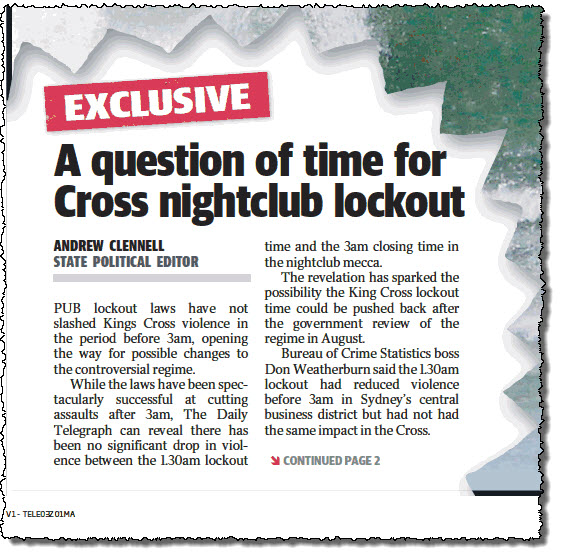 Uniform silliness. Andrew Hastie has been sacked from the Army Reserves after refusing to stop using photos of himself in his army uniform on campaign material. The Canning MP was elected in a byelection last year and has made many comments on national security and Islam, citing his Defence Force experience. In a statement given to The West Australian, the Defence Department said Hastie had already been asked to remove the pictures:

“‘Defence contacted Mr Hastie, a member of the standby Army reserve, and requested he remove imagery of himself in uniform from election campaign material,’ the department said. ‘Regrettably, Mr Hastie did not comply. Accordingly, the army issued Mr Hastie with a notice indicating the intention to terminate his service because he had failed to comply with directions and Defence policy.'”

Hastie had a dig at both Defence and former army chief David Morrison: “David Morrison politicised the ADF long before I ever put my mug on a billboard. In fact, he hastened my exit from the army into politics.”

Hastie isn’t the only former army member to be asked to remove photos in uniform, Labor’s candidate for the seat of Brisbane Pat O’Neil has also been asked to remove billboards that feature him in his army unform and read “Serving our community. Our nation.” Australian Liberty Alliance candidate and former defence force member Bernard Gaynor wrote to Defence Minister Marise Payne over O’Neil’s billboards, saying:

“Billboards featuring candidates in military uniform should not be allowed.

“They don’t need a letter from the ADF to know this is wrong.”

“To have a candidate in uniform promoting views like same-sex marriage and safe schools gives the impression that they are views supported by the ADF.”

I am rather disturbed that Connor Whittle lists firearms as a disruptive technology.
While he is technically correct I am not sure wielding a gun is the kind of disruption even the LDP intends to promote.

““To have a candidate in uniform promoting views like same-sex marriage and safe schools gives the impression that they are views supported by the ADF.””

And we certainly cannot have the ADF being seen to support such humane values.