Isentia Index: the election campaign that wasn’t there drags on

The Greatest makes his farewell as the election drags on.

Apart from Opposition Leader Bill Shorten getting equal time with Prime Minister Malcolm Turnbull, news volumes are not much higher than at any other time, as the campaign that no-one is watching plodded its way past the halfway mark, tortoise against tortoise.

Senator Nick Xenophon leapt up to third as the government and John Howard leapt into him, alleging hard core protectionism and general populism, as they become more worried about the make-up of the Senate, and perhaps even a few lower house seats in SA. Premiers Mike Baird and Daniel Andrews have been somewhat yo-yos during this campaign, swinging in and out of the news, but most of it this week for Baird was owing to the damaging east coast low that ripped through all four eastern states, leaving destruction and some lives lost, while the CFA dispute pushed Andrews up the list.

Meanwhile the complex (well sorry, they’re actually not that complex) superannuation changes flummoxed a few of the less numerate pollies over the past seven days, but it doesn’t matter, because according to Cabinet Secretary Arthur Sinodinos, it’s all still up for grabs anyway. 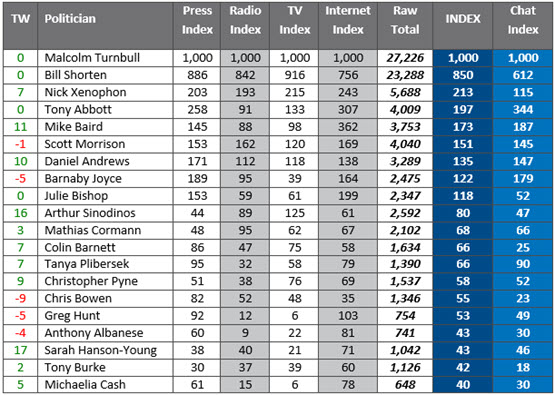 Nothing really standing out on social this week, apart from general malaise, and what else is on telly?

Missing the soldier repatriation ceremony was not popular at all on talkback, pretty much the first issue of this campaign to get plenty of callers fired up.

And while there are plenty of reasons to not like his sport, there are so many more reasons to love the man, what he stood for, and the pride he gave to so many people who had been downtrodden for so long.