The candidate for Melbourne Ports says she didn't know who would be hosting.

Greens candidate for the seat of Melbourne Ports Steph Hodgins-May says she was unaware that a candidates’ forum she is set to take part in will be hosted by Zionism Victoria. The forum, to be held on June 22 and will include Hodgins-May, Labor MP Michael Danby and Liberal candidate Owen Guest, is hosted by both the Australian Jewish News and Zionism Victoria. The electorate, which takes in Melbourne suburbs such as St Kilda, Elwood, Port Melbourne and Balaclava, has a high proportion of Jewish residents. Danby has long been a supporter of Israel. Following tweets by journalist Jarni Blakkarly yesterday, Hodgins-May sent him a direct message on Twitter, which he has since published, saying “your tweet was the first I learned of Zionism Victoria hosting so I plan to follow up with the organisers”. Crikey attempted to contact Hodgins-May this morning but has not heard back. 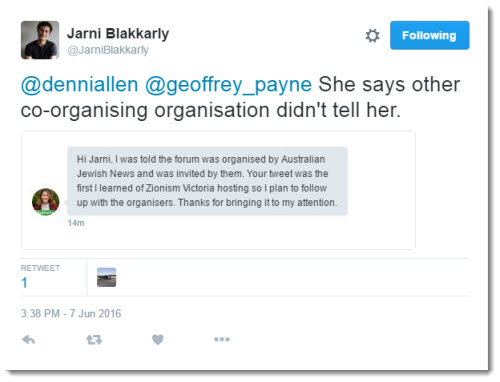 ionism Victoria’s website says it is the recognised roof body representing the Jewish community on all aspects related to Israel. It says “the media has been plagued with bias towards the Palestinian cause”.

Zionism Victoria has already hosted Foreign Minister Julie Bishop during this election campaign. Australian politicians have been criticsed in the past for appearing at conservative Christian events such as the Australian Christian Lobby’s annual conference. On the other side of the Yarra, the Labor and Greens candidates for the seat of Melbourne (held by the Greens’ Adam Bandt) will participate in a debate hosted by the Australia Palestine Advocacy Network next week. 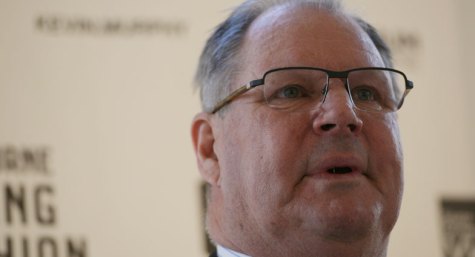