John Howard slings protectionist mud at Nick Xenophon. And is that pork we smell?

Bernard Keane, Crikey politics editor: With campaigning effectively on hold while the Sydney storm damage was inspected, and both sides staying low profile — a draw. Turnbull, at flooded Camden, Shorten at ravaged Coogee Beach. Labor announced it was restoring most of the funding to community legal centres cut by the government, but politics was an even lower priority than usual for most.

Simon Banks, managing director of Hawker Britton: With an understandable focus on the storms and floods in New South Wales, Queensland and Tasmania, today wasn’t really about politics. Instead, it was a reminder of something more important: that whoever wins on July 2, we live in a great country where we all come together when our fellow Australians are in need. That said, the 2016 election still comes down to two key issues: first, would you rather spend $50 billion on a corporate tax cut or invest it in improving our schools and saving Medicare? Both grow the economy. The first relies on big business and foreign investment to deliver. The second says our best investment is the Australian people themselves. Second, who is the real Malcolm Turnbull? Do you want a leader whose idea of agility and innovation is having a political debate on Facebook — or one that actually invests in a world class NBN? So who won the day? Tony Windsor. If Monday night’s #QandA is any guide, the people of New England want better schools, Medicare and the NBN.

Clement Macintyre, professor of politics and international studies at the University of Adelaide: It’s not going quite the way that the Coalition wanted. Tax cuts aren’t proving as attractive as they might have hoped — and they are spending too long defending other areas that should be strengths (superannuation). Then, sending John Howard to campaign in Mayo suggests real concerns in seats that should be immune. For its part, Labor’s tight focus on narrow-targeted spending promises (childcare) designed to attract critical voters in marginal seats seems unnecessarily defensive. There are (still!) nearly four weeks to go before election day, yet pre-polling begins on Tuesday of next week: it is time to be bold but no signs of that yet. With both leaders interrupting their scheduled campaigning to attend to flood sites, it is hard to pick a winner. Yesterday was a draw, but at this stage of the campaign the government would have been expecting to be doing better than that. 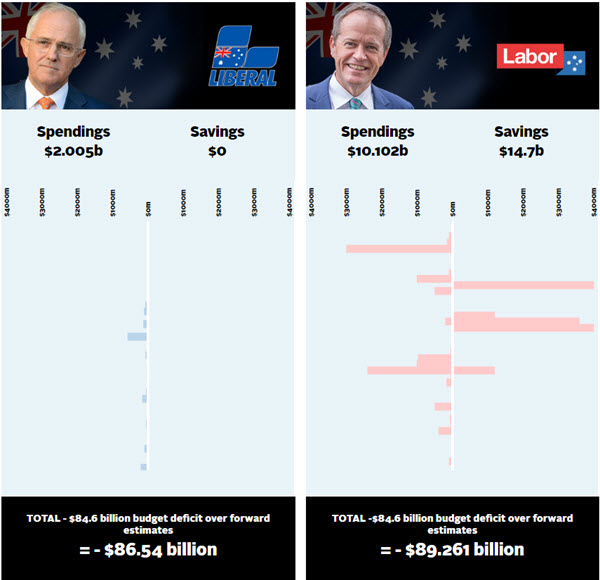 Nothing substantial. See Pork Watch (below) to see the promises the Coalition did make today. (We’re not including anything below $1 million in Cash Tracker.)

Turnbull then headed to the marginal seat of Gilmore in southern NSW, currently held by the Liberals’ Ann Sudmalis on a margin of 3.8%, where he toured the HMAS Albatross near Nowra. He is expected to announce funding for a port upgrade and respite care for young people with disabilities. After refusing to join Bill Shorten at a Sky News Peoples’ Forum this evening the Prime Minister will now be facing Leigh Sales on tonight’s 7:30.

Bill Shorten: Today looks set to be a big day for Labor, as it sets out its 10-year economic plan and seeks to assure voters that it will manage the economy responsibly. Bill Shorten started his day at a breakfast in Brisbane with shadow treasurer Chris Bowen, where he announced their plan to deliver “fair budget repair”. The six-point plan involves investing in people through improvements to education, investing in infrastructure and the renewable energy sector, supporting start-ups and small business, and better targeting of tax concessions. The opposition has vowed to return to surplus in the same year that the Coalition has predicted, 2020-21, but has admitted a Labor government would have bigger deficits over the forward estimates.

The Greens: The Greens will today unveil a plan to deliver a living wage to artists. The Greens arts spokesperson, Adam Bandt, will announce the plan at a debate in Melbourne today with Arts Minister Mitch Fifield and Labor arts spokesman Mark Dreyfus. Bandt told the SMH:

“The majority of artists — they’ve been living hand to mouth for most of their working lives. With rising housing costs, including city areas where artists would have lived, that’s making it difficult as well.”

The plan will consist of changes to the Centrelink eligibility test as well as an increase in the amount of super offset artists can qualify for — from $500 to $1000. Bandt also announced today that Greens would be preferencing Labor at No. 2 in all inner-city electorates.

Malcolm Turnbull will today announce a Coalition government will spend $779,000 on a port upgrade for Ulladulla and $358,000 to deliver respite care services for young people with disabilities in the seat of Gilmore. He also announced in his local paper the Wentworth Courier that the Coalition would provide $15,500 for a CCTV Camera and a connected workstation monitored by local police at Gap Park, where more people take their lives than any other place in Australia.

The former prime minister John Howard has weighed into the debate in South Australia, likening Nick Xenophon to Pauline Hanson and Donald Trump yesterday. Speaking to Adelaide’s FIVEaa radio he attacked Xenophon’s protectionist policies and suggested that his increased support was a response to people being less “rusted on” to major parties.

“Some of the issues that Pauline Hanson talked about, Nick Xenophon’s talked about — certainly trying to whip up concern about free trade agreements.”

Nick Xenophon responded by defending his criticism of free-trade agreements as looking after the national interest and said:

“I really like John Howard, and it really saddens me that he is using that sort of mudslinging. I thought that John Howard was much classier than that, to use mudslinging to compare me to Pauline Hanson.”

Meanwhile, Pauline Hanson herself attended the campaign launch of the 27-year-old One Nation candidate for Oxley, Brad Trussell, last night. The launch was held at the Dukes of Hazzard-themed restaurant Boss Hog’s Steakhouse, which meant that Hanson was surrounded not by the Australian flag as usual, but by a different symbol with racist connotations: the Confederate flag. The launch was attended by several anti-racism protesters and a large police presence, RN Breakfast reported this morning. 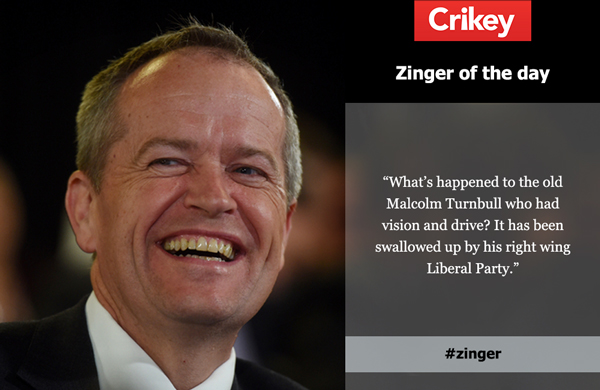 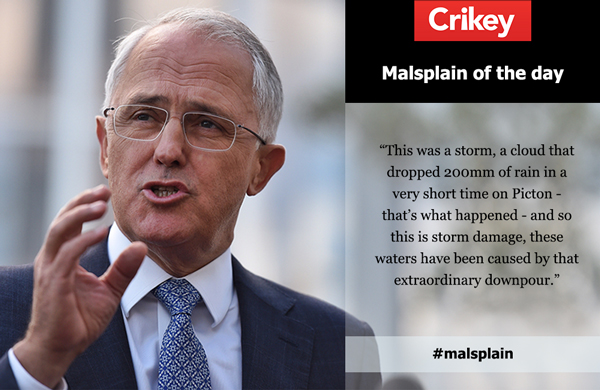 Yesterday we saw the reprisal of some iconic campaign attire; and we’re not just talking about the ubiquitous hi-vis. Firstly, Greens leader Richard Di Natale rocked his now-infamous black turtleneck in the latest installment of the ABC‘s Poll Position in which he (not so) expertly sings along to Bohemian Rhapsody. And secondly, former prime minister John Howard went for a walk in Adelaide sporting a vintage John Howard tracksuit … 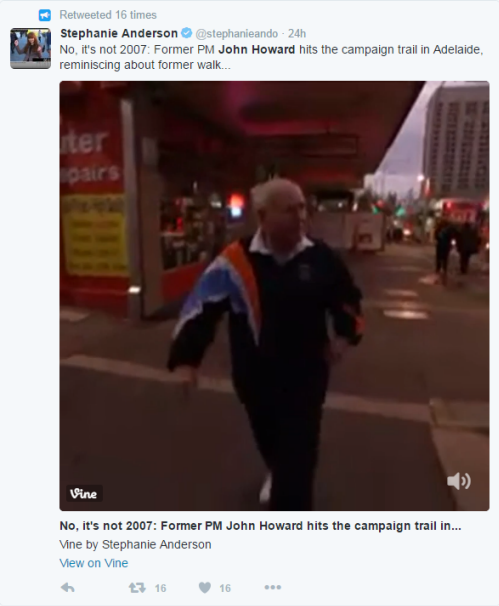 The Greens Senator for South Australia Sarah Hanson-Young has a challenge on her hands to keep her place in the Senate this year with Nick Xenophon and his team pressing. The folks who run social media entity Shit Adelaide think she’ll be all right, whether she gets the win or not… 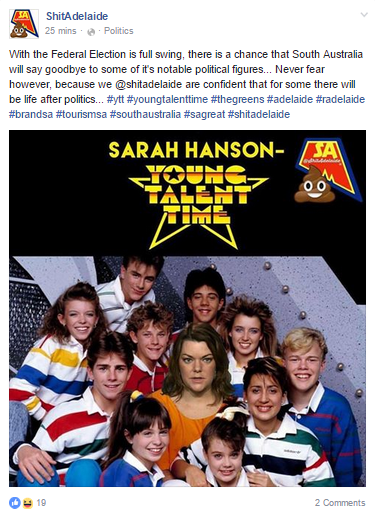 The storm damage put campaigning on hold yesterday, but today could be one of the more important days of the campaign as Labor puts forward their 10-year economic plan and the Coalition attacks it mercilessly.

Is that Malsplain for real? Luckily for me I am living outside Australia and miss these gems. But I cried tears of joy at this one. In a nutshell – everything that is missing from the campaign – a PM with something to say that we don’t already know. As Clement Macintyre commented – the government would have been hoping to be doing better at this stage.

To Mr Howard. Thank you for negligible input, you had your time. Now bugger off and enjoy having your snout in the trough for as long as you live while we the plebs get on with being plebs.

I hope the insurance companies take notice of turnbull’s input, he thinks he’s sorted them out!