One step closer? Fairfax has for years been insisting it has no plans to float or otherwise spin off money-making real estate business Domain — the last remaining tributary to its once mighty rivers of gold — but some developments in office allocations have set tongues wagging.

In a few weeks, Domain editorial staff in Melbourne will be leaving Media House (home of the Age‘s newsroom) to join the rest of the operation at swanky new South Melbourne premises. It’s where the most of the Victorian Domain operation has been housed since December, and it is also the home of Metro Media Publishing, the newsroom of the glossy Melbourne Weekly titles (Domain purchased MMP outright early last year — the free suburban newspapers make money through real estate advertising and were founded by Domain boss Antony Catalano). This follows the Domain Sydney operation leaving the main Fairfax building in Pyrmont last year to reside in its own offices in Harris Street, not too far away. Doing this freed up a floor in Sydney that Fairfax could rent out, and it’s understood similar reasoning is behind the move in Melbourne.

But for the journalists employed by Domain, the physical separation from the main metro newsrooms makes it harder to collaborate. It also isolates Domain culturally, leaving it less connected to the broader operation.

All this would make it easier to spin off Domain from the rest of Fairfax. Though its long-suffering spokesman — who we realise has been asked this question for years — insists it still has no plans to do so. “As we have repeatedly said, there are no plans for an IPO,” he told Crikey yesterday. “Domain is a business of enormous value, and growing aggressively as part of the Fairfax portfolio, for Fairfax shareholders.”

Trouble with the DLP. The Democratic Labour Party has expelled its New South Wales branch, with the federal executive taking over its operations until a new state executive can be elected. Federal secretary Stephen Campbell told Crikey that it wouldn’t affect the party’s candidates for the upcoming election, who had already been selected. We understand the issues with the NSW branch came down to one domineering member of the executive, but Campbell said “anything that is alleged within the party is kept within the party”.

Stiff competition after politics. Former independent MP Rob Oakeshott might want to consider renewing his ownership of roboakeshott.com. While he’s no longer in politics, we don’t think he’s moved into assisting men with their erections, which is what the domain name now advertises.

Rolling out the big guns. Christopher Pyne is staring down both Labor and NXT in his seat of Sturt. So yesterday he called on the Liberal’s most potent weapon … well, not quite. Attorney-General and Queensland Senator George Brandis joined Pyne for some doorknocking yesterday, doubtless terrifying residents who would have opened the door to be confronted with the country’s chief law officer. With any luck Brandis would have been able to offer his highly rated (by himself, if no one else) legal skills to constituents, although little else, given he doesn’t actually live in the state. 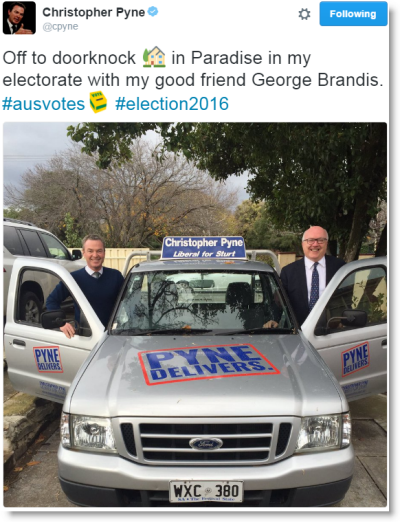 Perhaps Brandis opined to constituents on why the civil liberties he once championed must now be sacrificed to the War on Terror, or how he didn’t really offer a job to Human Rights Commission president Gillian Triggs if she’d quit, how he hadn’t actually had both counter-terrorism and the arts stripped from his portfolio in the course of a single term or why he actually didn’t totally bungle the amendment of 18C. But we’d like to think “Bookshelves” just serenaded each voter with some bush poetry. 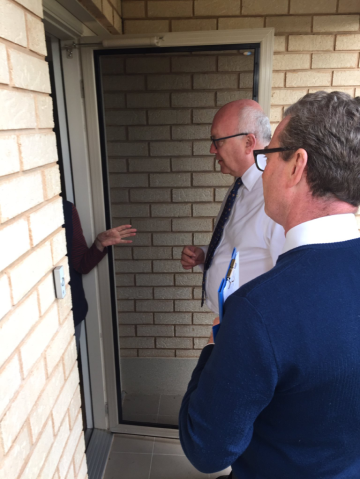 Image from a constituent, via Labor.

Wash your hands and give us back our money. While our political leaders criss-cross the country, shaking hands with everyone they see, the Food Safety Information Council has a word of warning. In a press release this morning, the council says “experts warn those on election trail to avoid winter gastro by having clean hands”. While we know politicians love to claim their opponents are washing their hands of particular issues, apparently they need to actually get some soap and warm water to make sure it’s done effectively:

“Council Chair, Rachelle Williams, said that norovirus gastro outbreaks tend to be more common during the winter months especially during June and July when the election campaign is being run.

‘Norovirus outbreaks are common where people are in close spaces, such as when travelling and at community events. Once norovirus is contracted, a single infected person can easily spread gastro to many others especially by handshaking.’

‘In March this year more than 70 people got norovirus at a political event in Nebraska, USA and health authorities attributed its spread to handshaking.’

But of course the council isn’t just about making sure our pollies don’t get a case of the runs — this isn’t free advice:

“Now politicians have our advice on how to safely shake hands, we are calling on the Turnbull Government to commit to restoring our Federal funding which was cut by the Abbott Government in 2014.

“We are a health promotion charity and have had bipartisan support since the early 2000s through a Government grant. Our important role in reducing the risk of gastro and food poisoning in the community has been recognized by the Federal Government’s own research. So it was disappointing to hear from Food Minister Fiona Nash, prior to the election being called, that our funding wouldn’t be restored.’

“There have been major food poisoning outbreaks in the last 18 months linked to imported frozen berries, unpasteurized milk, lettuce, bean sprouts and raw eggs.  This puts a huge drain on our health services which our educational work can easily reduce.

“Without further funding we will have to close our telephone advisory service this month and it looks unlikely that we will be able to run the 20th Australian Food Safety Week in November 2016.”

The Food Safety Council is running a crowdfunding campaign to make up their loss of government funding. Unfortunately we need to use our dirty keyboards and phones to support it.

Tuned in or tuned out? As this marathon election campaign roles on, we are told that people are switching off and are bored — but it seems some of us feel a bit guilty about our disinterest.

In today’s Essential report, a collective 45% of respondents had “very little” to “no interest at all” in news about the election and policies, with only 14% saying they had “a lot of interest” (and quite a few don’t know when the election date is). However, in some cases, even the low number of people who do report being engaged might be a stretch.

Some 22% of respondents stated they had watched one of the leadership debates so far. But a quick glance at the numbers raises a few questions. If 22% of people had watched the debates, that would mean blockbuster viewing figures of roughly 3.3 million people. But as Crikey reported at the time, a piffling 55,000 people tuned in on May 13 for Shorten and Turnbull’s first debate on Sky. While their second bout on the ABC attracted a comparatively generous 888,000 viewers, even if we assume not a single person watched both, the collective figures aren’t a third of what the Essential response would imply. Maybe this week Essential caught a particularly engaged set of voters, or maybe those polled feel a bit guilty about their actual level of engagement. Or, perhaps when responding to a survey in which they rate the parties, their leaders and their major policies, people are loath to admit that they aren’t really paying attention.

Delivering for Dobell. The voters of Dobell have been treated to a pamphlet telling them just how much money has been spent on local projects — a whopping $140,000. Do we smell pork? 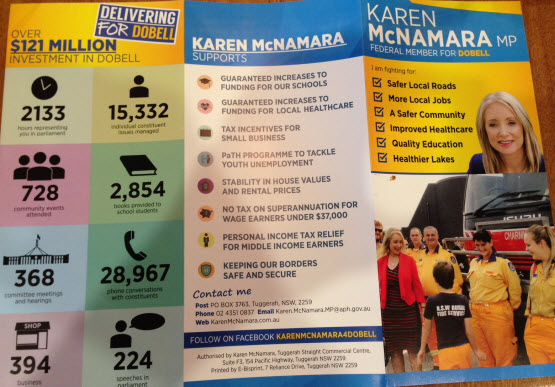 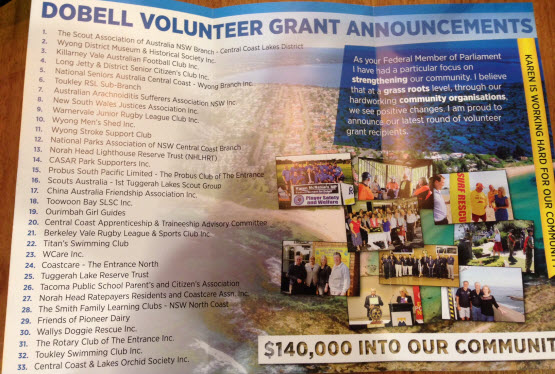 It would be alarming enough to have Pyne materialise on one’s doorstep let alone be accompanied by a village idiot.

Well they do have a surfeit of them.

I think that the poor old norovirus is just being made a scapegoat for the simple fact that pollies give us all the shits.
At least there are antibioticcs for the former.

BTW, did anyone see a party affiliation or leader mentioned on Karen McNamara’s bumph?