There's been a marked slowdown in spending as the focus turns to the flood crisis.

Bernard Keane, Crikey politics editor: Another draw, with weather, clean-ups and flood deaths still dominating the east coast news bulletins. Bringing out Malcolm Turnbull’s personal history is a risky play for the Liberals — contrary to what his critics would like us to think, Turnbull has an inspiring personal story of overcoming family circumstances (much as Kevin Rudd did) and wasn’t born wealthy, but regaling voters with it is just as likely to appear desperate as to induce admiration. Some in the media, and the Nationals, tried to invent Bill Shorten being sexist, but even News Corp struggled to stand it up.

Ben Eltham, political correspondent for New Matilda: I thought Labor won Monday, and the weekend. I thought they had a strong arts policy launch by Shorten and Dreyfus which showed Labor still has something to believe in and something for the true believers. Despite Shorten’s gaffe, childcare is an important topic, and where Labor wants the media to be. So the fact the focus shifted to childcare is a win for Labor. I can see how some parts of media interpret his comments as a gaffe but, be that as it may, talking about mums and childcare is the right territory for Labor.

Dr John Hewson, former leader of the Liberal Party: Into the second half — no clear winners so far. No real “gotcha moments”. Little interest from the electorate, although discontent with and distrust of three major parties mounting in favour of independents and minor parties. Fear a policy auction soon — maybe childcare. Something will give.

Dr Zareh Ghazarian, political scientist, author and media commentator: The winner is Bill Shorten. He successfully set the agenda for the last couple of days where early education and childcare policy has dominated the debate.

It was a fairly quiet day on the spending front, the flood crisis on the east coast, and the nature of a long campaign means it’s not surprising that big promises aren’t on the cards today. Turnbull didn’t put anything new on the table, and Shorten only had one promise. 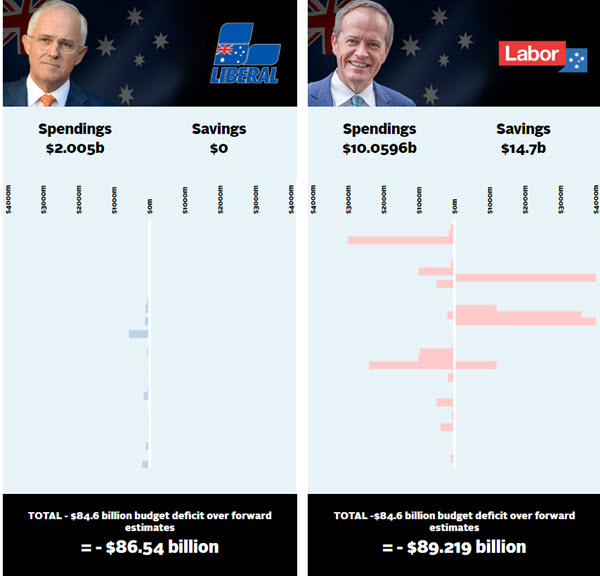 The Member for Dawson George Christensen has taken pork-barreling to a new level after publicly promising to donate $12,000 to a turtle rescue centre if re-elected. He was referred to the Australian Electoral Commission by activist group GetUp and subsequently withdrew the promise. He responded angrily to suggestions that the donation was in some way unethical or corrupt.

“How is it bribery? The centre doesn’t vote, the turtles don’t vote,” Christensen said in his defence.

Malcolm Turnbull: Turnbull made an unplanned change to his schedule, abandoning his visit to Tasmania due to the ongoing flood crisis. Instead he visited the east coast of New South Wales, where wild weather has destroyed homes and displaced people.

Bill Shorten: The Leader of the Opposition spent the morning in Adelaide, where he began with an interview on ABC radio to discuss childcare and apprenticeships. Shorten campaigned with colleagues Sharon Bird and Nick Champion to unveil Labor’s plan to ensure at least one out of every 10 workers on a federal job site is an apprentice. He is due to spend his afternoon in Sydney with Deputy Labor leader Tanya Plibersek and Member for Kingsford Smith Matt Thistlethwaite to visit areas impacted the devastating weather.

The Greens: The big policy announcement from the Greens today was a new Independent National Environment Protection Authority. Greens Senator Larissa Waters called for a complete overhaul of environmental law and a new federal watchdog. Greens leader Richard Di Natale will begin his afternoon with a doorstop in Hobart to discuss the important issues of the day — perhaps he’ll turn on the charm and order some coffees in Italian like he did yesterday.

A very apt day to be talking about independents and micro-parties in the wake of a new poll suggesting up to 15% of voters will be backing them in this election. Today, we turn our attention to Liberal Democratic Senator David Leyonhjelm. He managed to draw a comparison between the stolen generations and the burden faced by Australian taxpayers. He produced a parody video of former prime minister Kevin Rudd’s apology to the victims of the stolen generation to apologise to Australians who have been harmed by government taxation: “At long last we acknowledge the mistreatment of Australian taxpayers, amongst the longest suffering peoples on this land.”

Turnbull is the clear winner in the media numbers game today, although Shorten kept pace on television. Unfortunately for the Greens, not a lot of love for Richard Di Natale. 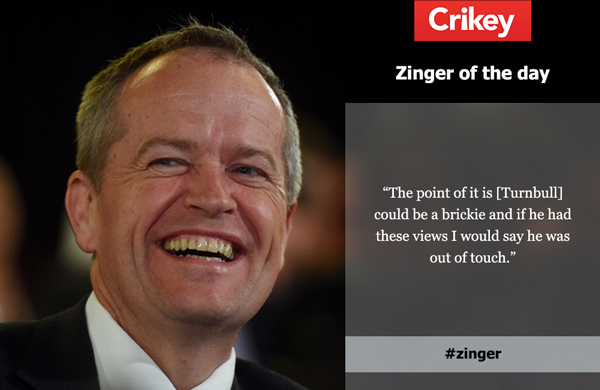 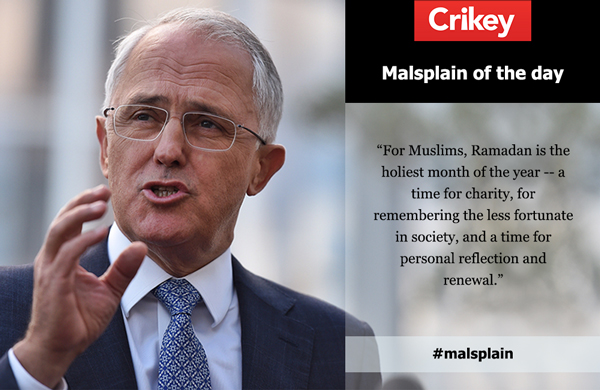 Finally, we have a true feminist PM — a bloke. While Turnbull’s comments are perfectly reasonable and most welcome, it does reflect a sad reality that it takes a male prime minister to declare himself in favour of gender equality, while senior female politicians are quick to distance themselves from the idea. Let’s just hope a woman might dare to one day say the same without being attacked as a misandrist. Turnbull quoted Chinese Communist revolutionary Mao Zedong when he said “women hold up half the sky“. Probably the only time he’ll be aligning himself with the Communist leader.

Yes folks, we have our first viral hashtag of the campaign, and it comes from the Prime Minister himself. Malcolm Turnbull has decided to play the “Aussie battler” card in an attempt to reverse the apparent misconception that Mr Habourside Mansion comes from the top end of town. Specifically, he’s released a campaign ad talking glowingly about his father, which was also referenced in yesterday’s scorecard. We’re not saying anything bad about Turnbull the Elder, nor do we have any reason to doubt that he worked hard, but we do have reason to think the PM bit off more than he could Malsplain here. The electorate, particularly those oft-mentioned working mums and dads, generally don’t relate to the struggle of a man who attended an elite private school and inherited more than $2 million when his father died. Cometh the moment, cometh the hashtag and cometh the torrent of satire. Here’s a couple to whet the appetite, the rest you’ll have to find yourself. 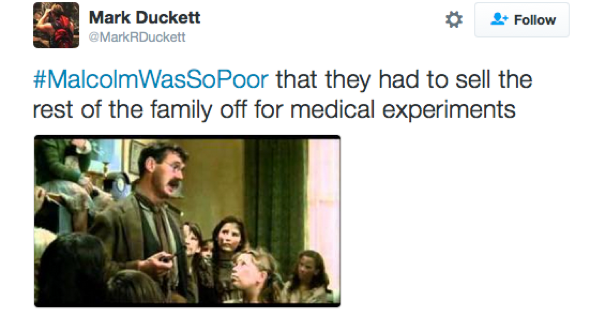 Bill Shorten blundered while unveiling Labor’s childcare package by suggesting Australian men relied on women for organising childcare. National Party deputy leader Fiona Nash was outraged and described the comments as “prehistoric”. Some were quick to accuse her of hypocrisy, however, reminding of the time she stood by all those signs about the so-called “bitch”, “liar” and “witch” that was Julia Gillard. 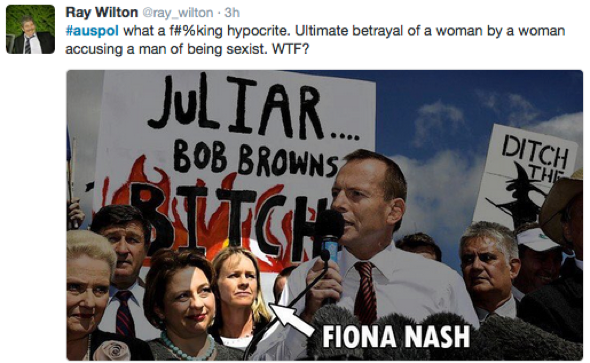 This may go down as the most engaging and exciting media moment of the whole campaign. John Shakespeare from The Sydney Morning Herald has created this amazing animated, interactive game, Feeding Time. You can play as either Malcolm Turnbull or Bill Shorten as you try to catch gold coins and ballot boxes to win your way to the magical 76 seats. Points lost if you accidentally catch an onion. Considering the polls, the rise of minor parties and the betting market, this is about as accurate a predictor as you’ll find. 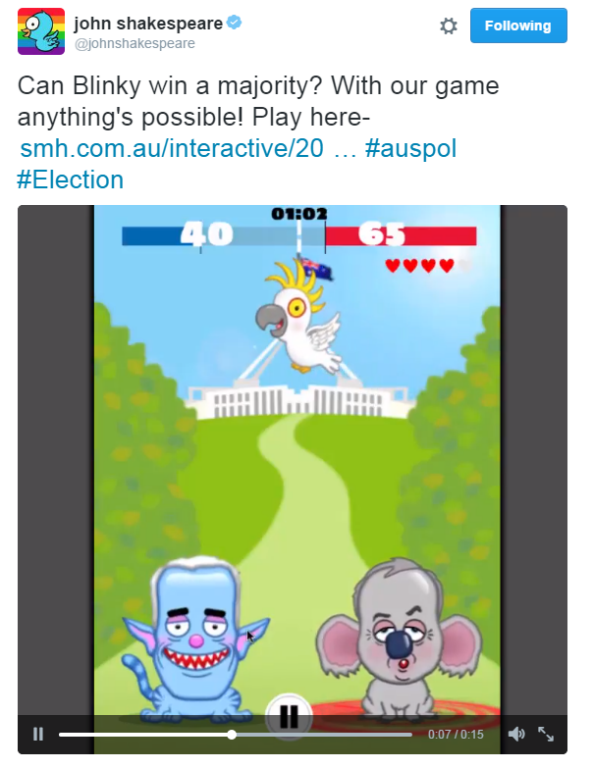 It was quite an effort to wade through all the #MalcolmWasSoPoor tweets, but apparently a few others got through. Here’s a good one to sum up the complex decisions of a swinging voter.

Turnbull had to cancel his Tasmania visit due to flooding and headed to New South Wales to visit areas impacted by the wild weather. Shorten kept his morning commitments in Adelaide but then went to Sydney to thank emergency workers. Di Natale spent his day in Hobart as the Greens unveiled their bold new plan for the environment.

Fiona Nash, Sophie Mirrabella and Bronwyn Bishop all in the same photo with Australia’s most recognised misogyny icon, …what’s his name again?Says it all doesn’t it.

Anyone, or anything, that would mock the Apology is a grub. Shouldn’t be in the Parliament. Granted the Apology on its own is insufficient and needs to be followed up with genuine action to right the wrongs but it was a start.

Confused by Python remark – Michael Palin plays the working class father in the sketch. Or were you making to reference to the Four Yorkshireman sketch, which did have Eric Idle in it, where a bunch of four rich toffs compete for who had the hardest upbringing? Certainly fits the tone of Malcolm’s ad campaign…
“EI: ‘E was right. I was happier then and I had NOTHIN’. We used to live in this tiiiny old house, with greaaaaat big holes in the roof.

GC: House? You were lucky to have a HOUSE! We used to live in one room, all hundred and twenty-six of us, no furniture. Half the floor was missing; we were all huddled together in one corner for fear of FALLING!

TG: You were lucky to have a ROOM! *We* used to have to live in a corridor!

MP: Ohhhh we used to DREAM of livin’ in a corridor! Woulda’ been a palace to us. We used to live in an old water tank on a rubbish tip. We got woken up every morning by having a load of rotting fish dumped all over us! House!? Hmph.

EI: Well when I say “house” it was only a hole in the ground covered by a piece of tarpolin, but it was a house to US.”

Ben – I think the triple reference Python thang is what the kiddies call a mash-up, linear thinking not being their forte.
I’m just stunned that Talcum has scraped the barrel bottom of US TV sitcom with his “One and a Half Men” skit.
Having tried the Abe Lincoln log cabin meme, he’s now going for the Charlie Sheen vote?

Mash-up or deep cut? Either way, I knew Crikey was getting too kewl for me a fortnight ago when memes became dank.