Where’s Wyatt? Innovation and agility poster boy Wyatt Roy has found himself in a spot of bother in his electorate of Longman on Queensland’s Sunshine Coast. Roy was due to show up at a candidates forum broadcast on the local ABC on Friday morning but didn’t show up, leaving his Labor rival Susan Lamb and candidates from the Katter Australia Party, Family First and the Greens to debate the issues without him. Ms Tips understands that Queensland’s LNP HQ isn’t happy that Roy skipped the debate, especially since ReachTel polling in the seat shows that Labor has clawed back the 6.9% margin with which Roy won the seat by in 2013, meaning that on two-party preferred, the vote sits at 50-50. Perhaps the youthful assistant minister needs to spend more time with locals and less with tech bros.

Mercuriouser and Mercuriouser. Over the weekend the election campaign reached the halfway point (at about 3.30am on Sunday morning, according to an email from Labor’s campaign director, George Wright). Yes, we’re halfway there (and yes, livin’ on a prayer), which means that it is time to do some in-depth investigation into which candidates across the country have the best names. First up, Labor’s Zac Beers (candidate for Flynn in Queensland) has the best bid for name-related merchandise. Labor’s Jane Austin wins the most literary name; we hope that she campaigns in Denison on truths universally acknowledged. As Barnaby Joyce and Tony Windsor fight it out in New England, it is unclear if pollsters have measured the possibility of the Greens candidate pulling in a higher vote just on the back of his glorious name — Mercurius Goldstein. Ms Tips’ favourite name so far belongs to the Science Party’s candidate in the seat of Grayndler; inner-Sydney voters will receive ballot papers featuring the name of Meow-Ludo Meow Meow, which is actually his real name (a tribute to the 2001 movie Super Troopers) although his parents chose the more prosaic Stuart McKellar. Seen a candidate with an excellent name? Drop us a line.

Sisters are doing it for themselves. Two nuns have defaced election posters in what the Sex Party’s Fiona Patten describes as a “cowardly and unprovoked attack”.

Images of the defacement were tweeted by the Instagram account of hipster blog Brown Cardigan a few days ago, but the Sex Party only sent journalists a statement with the photos today. 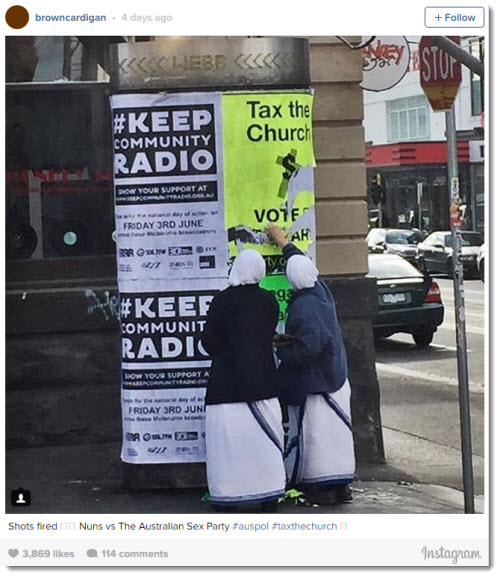 The nuns are described as being from the “Mother Teresa order in inner city Melbourne”, that is, the Missionaries of Charity, and the photos appear to show two women in the characteristic habits, ripping posters with “tax the church” and “legalise cannabis” on them. The “nuns”, if that’s what they are (we aren’t ruling out this being a stunt), have nothing against community media though. Another poster, to save community radio, was left undefiled.

In NSW in 2011, a church in Sydney’s Surry Hills demanded Sex Party posters be removed. They were being displayed outside the church, which was being used as a polling booth. The Sex Party called on churches to no longer be used as places of voting.

It seems the Missionaries of Charity are taking things into their own hands. We can only hope this escalates.

Barnaby Joyce and the long-lost relations.The back and forth between known terrier-ist Johnny Depp and Barnaby Joyce over the former’s attempt to smuggle dogs into Australia continues. After Depp’s recent observation on an American talk show that Joyce looked as though he had been inbred with a tomato (not crossbred, you understand, but inbred), Joyce noted the family resemblance at a stop in Bingara, NSW on Sunday, posting a picture to his Facebook page of himself holding a bag of “cousins”. 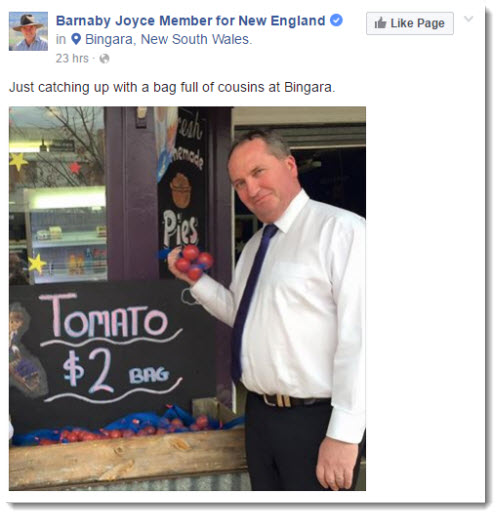 Driven mad? We hear food delivery service Deliveroo offered its drivers extra pay to continue to work through the wild storms buffeting NSW over the weekend. After a tweet from Junkee opinion and politics editor Alex McKinnon asking people to avoid engaging delivery services such as Foodora and Deliveroo during the storms (“don’t endanger people for your own convenience”), a Deliveroo driver replied, “thanks for your concern man, we’ve been told we can go home if we want and will be paid extra if we stay (deliveroo)”.

Deliveroo engages drivers (who make their deliveries using bikes or scooters) as subcontractors rather than employees. Contractors are, in essence, their own businesses, according to the law– meaning no minimum rates of pay, no protection from unfair dismissal, and no insurance unless they get their own. In this instance, the arrangement also raises questions about Deliveroo’s legal responsibility to ensure their drivers’ safety, and the drivers’ ability to refuse work they feel is unsafe.

Just shows that a tolerant society must tolerate the intolerant.
But not the intolerable.
Nor the stupid & ignorant.

Our Curry or Maul will be spewing if Roy gets dumped – after all they’ve done selling him to the whole state – after trying to save Brough in Longman – including and an editorial, to the state, a couple of days before he lost his seat in ’07.