Whether it's wild weather or popular independent candidates, it seems everyone in Australia is trying to protect themselves against something today.

Bernard Keane, Crikey politics editor: No one. Most of the east coast was focused on the weather, Sydney in particular, so the election was even more background noise than usual. Labor will have to keep plugging yesterday’s childcare package since much of the target demographic would have been too busy watching the rain and wind to notice the announcement.

Jane Caro, author, social commentator and communications consultant: The crossbenchers (present and future) won the weekend. Pundits keep saying a hung Parliament is unlikely but the more they deny it the more they turn attention to the minor parties. In particular, Nick Xenophon, Richard Di Natale, Jacqui Lambie and Tony Windsor, who are the only non-ALP/LNP pollies anyone has ever heard of. A disgruntled electorate can best punish both parties by voting for neither. Between the two (still) major parties, Opposition Leader Bill Shorten continues to do better as the polls confirm. To be fair, how could he not? Low expectations are always the best position from which to enter any competition. The only way is up. Prime Minister Malcolm Turnbull is burdened with high ones. Labor has stuck to its theme of “fairness” coherently with its announcement of a childcare policy and Shorten still has the demeanour of a winner while Turnbull looks increasingly rattled. The minor parties are also helping Shorten by splitting the LNP’s focus and by keeping his leadership rival, Anthony Albanese, tied up in Grayndler.

Eva Cox, writer, feminist, sociologist and social commentator: Labor attracted a lot of attention and deserves credit for its childcare policy and funding. It is the first serious attempt to deal with social issues outside health and education funding — so it deserves attention. Women with small children will notice it. Otherwise, fairly boring as midpoint seems almost a trough of interest. The voters are very disengaged; it’s hard to engage in obscure debates about economic growth … so headlines went elsewhere apart from childcare.

Simon Cowan, research manager at The Centre for Independent Studies: After an unseasonably (economic) dry month of May, finally over the weekend the skies opened and additional spending flooded over the parched land. While Turnbull sandbags seat by seat with micro announceables like upgrading sporting fields, Labor’s childcare spendathon looks like a vote winner, even if the sight on Sunday of Labor frontbencher Andrew Leigh staunchly defending childcare handouts for millionaire families tipped a bucket of cold water over Labor’s fairness theme.

Paula Matthewson, commentator and former media adviser to John Howard: After starting out with a gaggle of opinion polls claiming the federal election is still neck-and-neck, the campaign last weekend had Labor play to one of its strengths, childcare, at the risk of exacerbating its greatest weaknesses, being seen by voters as a reckless spendthrift. Meantime, the Prime Minister looked decidedly unlike a PM, perhaps more like a union leader, wearing an open-neck shirt and polar fleece jacket while geeing up the Country Fire Authority troops at a rally in Melbourne. Both men also laid a wreath to mark the centenary of the RSL, and to perhaps make atonement for not attending the repatriation of war dead earlier in the week. It might have been a nil-all draw this weekend if not for the video the Coalition campaign team released on Sunday evening. If Shorten’s secret campaign weapon is his glowing wife Chloe, then the heart-warming story told in the video about the PM’s single-parent father may well be Turnbull’s. Accordingly, the Coalition was ahead on points by Sunday night. 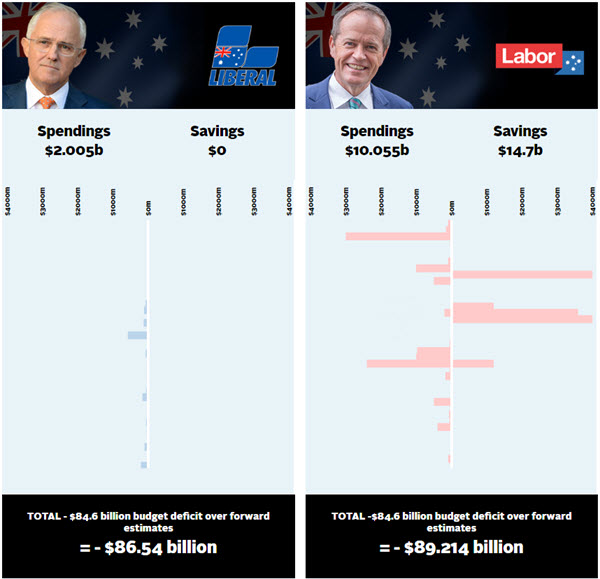 Malcolm Turnbull: The PM is in Melbourne today and started the day in Higgins where he announced funding for a new sporting facility with incumbent member Kelly O’Dwyer. O’Dwer rejected the suggestion that the promise was porkbarreling, saying it was important to deliver for local communities. Turnbull said O’Dwyer was a woman he admired and a good role model for young women:

“You can do anything. You can play for Australia, you can be a cabinet minister. Whatever you dream, you can achieve.”

He will later be speaking at an RSL conference, which Bill Shorten will also attend.

Bill Shorten: The Opposition Leader is also in Melbourne today. Following yesterday’s big announcement on childcare, Shorten will continue to focus on this area today. He started the day at a childcare centre in Ivanhoe where he announced a Labor government would contribute $100 million over three years to the childcare industry. When asked where this money would come from, Shorten re-iterated that a Labor government would have money through changes to negative gearing and by not proceeding with the Coalition’s planned business tax cuts.

The Greens: Greens candidate for Melbourne Ports Steph Hodgins-May will be handing out flyers today and is confident that she can improve on the 20.17% primary vote the Greens won in that seat last election. “We can win this,” she tweeted. Richard Di Natale appeared on Insiders yesterday where he defended the Greens spending plans and agreed with Bill Shorten’s comments on Donald Trump:

“It’s a statement of the bleeding obvious, and I think it’s worse than that, I think he’s dangerous for the US and dangerous for the global community, and you just need to look at those clashes that we have seen recently between anti-Trump and pro-Trump supporters.”

“There is also there a clear warning to Australians that if they do want stable government, if they do want certainty going forward, they should not risk votes to minor parties, Greens or otherwise, because that’s how we do risk ending up with another Labor-Greens coalition government, which would be the worst of all outcomes for Australians.”

Nick Xenophon told the ABC that the increased support for independents stemmed from a “sense of disillusionment”, but also stressed that the NXT team were at a disadvantage as they had no money to run television or radio ads.

Turnbull was mentioned the most across all platforms, perhaps owing to his statement about how he grew up living in a small shoe box in the middle of the road …

Spending the night on standby with the Davidson RFS flyer crew. @NSWRFS pic.twitter.com/8Le8xTQsXP 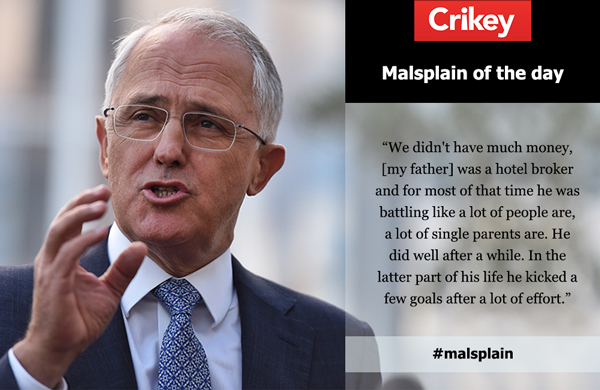 You’ve got to feel for the journos on the campaign trail; they’re pulling long days, patiently following the pollies around the nation from one carefully choreographed press conference to the next. The ABC’s Andrew Greene also had to struggle against the elements yesterday, with absolutely no sympathy from the cameraman who took this video. Trust us, this one’s worth a watch …

One for the millennials. The Young Greens dished out a dank Pokemon meme over the weekend …

how bad would it be if you didn’t realise there were more than two starters to choose from? pic.twitter.com/CmKbIBUjku

The crossbenchers will be happy with the latest Newspoll, Turnbull tells us he grew up in a shoebox and Labor makes a big promise on childcare. Shorten and Turnbull are campaigning in Melbourne today.

@jane Caro: “In particular, Nick Xenophon, Richard Di Natale, Jacqui Lambie and Tony Windsor, who are the only non-ALP/LNP pollies anyone has ever heard of.”
I have read three major articles on Indi and Cathy McGowan in the last week. I doubt I am the only one who has heard of her.

Talcum continues to scrape the bottom of the US TV sitcom barrel with his version of “One and a Half Men”!
Puke inducing. And that custard cloying soundtrack!