An omen of doom?

Fairfax has moved one of its most popular columnists to the weekend.

Has Fairfax Media started preparing for the day when it drops some or all of its weekday editions of The Sydney Morning Herald? In Saturday’s edition of the SMH, the first column from Elizabeth Farrelly appeared, shifted from her long-established Thursday paper spot. Farrelly writes on urban affairs, planning and is popular with core Herald readers in the eastern suburbs, inner west and lower north shore. Her columns on Thursdays generate huge responses from letter writers and posts on the Herald website.

And, yesterday, the first column from Mark Kenny, Fairfax Media’s chief political correspondent (the SMH and The Age), appeared in the Sun Herald in Sydney. Now that could be just for the July 2 federal election, but there was no sign of it being temporary in yesterday’s paper. It is the first time the chief political correspondent has had a regular column in the Sun Herald. As well, the Sun Herald has expanded its Sydney social coverage with a double-page spread moved forward in the paper — instead of the ratty looking half- or three-quarter page coverage, which has been the case for the past year or more. 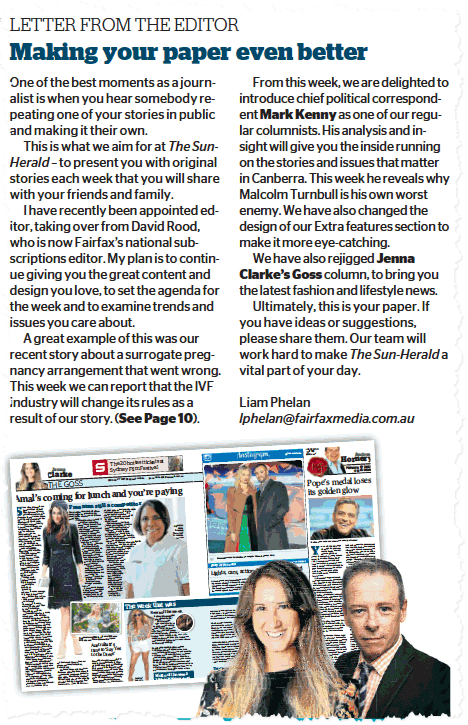 Now this all might be co-incidental with a new editor at the Sun Herald in Liam Phelan, who penned a short note to readers explaining the changes. But they are also the type of move that a media company would make when it is starting to get readers’ attention about the attractions of the weekend edition or the Sunday paper, and starting moves to close weekday editions. Moving the popular Farrelly to Saturdays tells us the Thursday edition of the SMH is in trouble with Fairfax Media management as they plan the shutdowns. That will help make closing the low-selling Thursday paper a self-fulfilling prophecy.

In the March audit, the Thursday edition of the SMH was the lowest selling of the Monday-to-Saturday papers with 95,693 copies sold. That was less than half the 191,728 copies of the Saturday paper sold. No wonder Farrelly jumped at the chance to move to Saturdays. The Sun Herald sells less than 200,000, but is essential to Fairfax’s property future with a large Domain lift-out full of Saturday auction results and associated stories. –

Newspaper circulations on the march … downwards