Crikey Campaign Scorecard: Malcolm helps an old frenemy, while Bill’s past haunts him

Turnbull is bogged down in superannuation, Shorten has a company tax headache. But don't worry, guys, no one is paying any attention yet.

Bernard Keane, Crikey politics editor: A narrow win to Labor — the government has yet to fully shake off superannuation, and Turnbull lost another day to it yesterday, as well as foolishly making a commitment that the government’s super tax plans wouldn’t be changed after the election, when they almost certainly will be. Morrison and Turnbull’s hysterical “war on growth” rhetoric, while doubtless sourced from high-quality focus group work, was also poorly timed — what a terrible look when the remains of Australians who had died in real wars were being returned to Australia. If Labor had made the same mistake, the tabloids would be feral.

Dr John Hewson, former Liberal Party leader: Electorate still not engaged. No baseball bats being taken to either side yet so too early to try to pick the result. However, neither side providing enough info to back their “plan” so neither really being believed. Indeed, ” Spend-o-meter” running hot on both sides guaranteeing that whoever wins will have their own “gotcha” moment claiming that things are actually much worse than they feared so having to attempt to bring down a tough budget with another hostile Senate. No net gain for all this electoral boredom!

Dr Zareh Ghazarian, political scientist, author and media commentator: The winner was Scott Morrison — added a bit of colour to the campaign by showing glimpses of his aggressive, attacking side by criticising Labor’s economic policies.

Simon Breheny, director of policy at the Institute of Public Affairs: As each day of the campaign rolls on, Labor appears to be clutching to protectionism with new-found fervour. Yesterday Shorten was in Sydney talking up his plan to force government bodies to use renewable energy. Next thing they’ll be spruiking the exciting benefits of regulation and red tape. As if to provide a direct contrast, Turnbull toured a mattress factory and made a point of mentioning that fact that mattress tariffs are decreasing from 19% to 0% by 2019 under the Australia-China Free Trade Agreement. For having a positive story to tell about the future direction of the country, the Coalition wins the day. 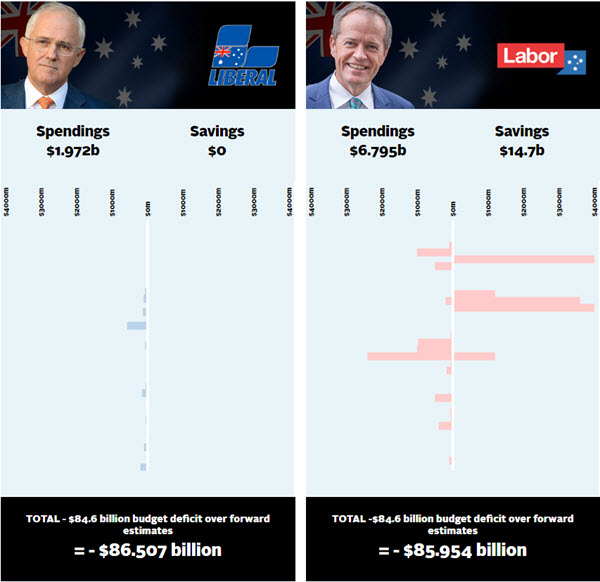 A relatively tame day of spending from both sides, and certainly nothing controversial. The government promises regional sporting facilities, airports and hospital infrastructure, while Labor is looking to boost Tasmanian tourism.

Liberal candidate for Eden-Monaro Peter Hendy has promised $350,000 for maintenance to the Narooma pool if the government is reelected.

Malcolm Turnbull: The Prime Minister was on the trail in South Australia today as polls point to an uncertain outcome for both major parties since Nick Xenophon’s NXT polling numbers have jumped higher than expected. His No. 1 priority was to campaign in Mayo where sitting member Jason Briggs holds a healthy majority but faces a battle to retain his seat in light of his poor behaviour in Hong Kong, which forced him to fall on his sword and resign from the ministry last December. Turnbull also stopped by FIVEaa radio, where he made a clear statement that his government wouldn’t raise the GST if returned for another term. The Turnbull media team hit a bit of a snag when their bus got stuck going up a hill. Like good photographers and reporters do, they rolled up their sleeves and pushed it free.

The Turnbull media bus is stuck. Everybody off and PUSH! #ausvotes @abcnews @ABCNews24 pic.twitter.com/GvSWVYtsZb

Bill Shorten: The opposition leader was in Tasmania for the first time since the day the election was called, and he put the local tourism industry at the top of the agenda. Labor will be hoping to take the seat of Bass off Liberal backbencher Andrew Nikolic, who won the it with a significant swing in 2013. Shorten was forced to try and soothe a fresh headache after the Coalition dug up a video of him supporting company tax cuts in 2011.

The Greens: Senator Sarah Hanson-Young unveiled the Green’s policy to increase the number of family reunion visas by 10,000 by redirecting them from the skilled migration visa quota. Greens leader Richard Di Natale joined his colleague Scott Ludlam in Perth for the launch of the Property Council of Australia’s #designperth report.

How did Senator David Leyonhjelm respond to Australian of the Year David Morrison’s suggestion that we stop using the term “guys” in the workplace? The proud libertarian declared it “political correctness with bells on”. Leyonhjelm said freedom of speech was under threat and called for the Australia Day Council, which selected Morrison as Australian of the Year, to be abolished. A complex issue that Leyonhjelm so eloquently summed up: “What are we going to substitute? XX and XY (chromosomes)? People with jiggly bits and dangly bits? I think Australians are over it.” 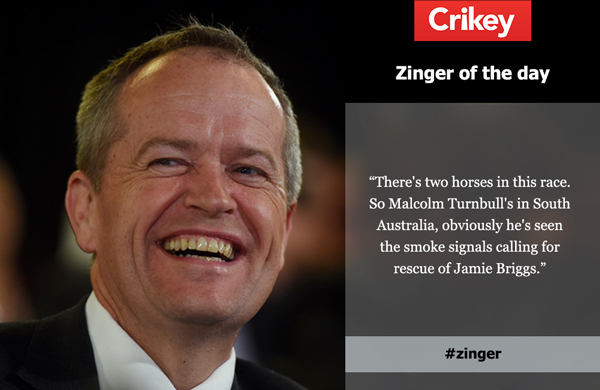 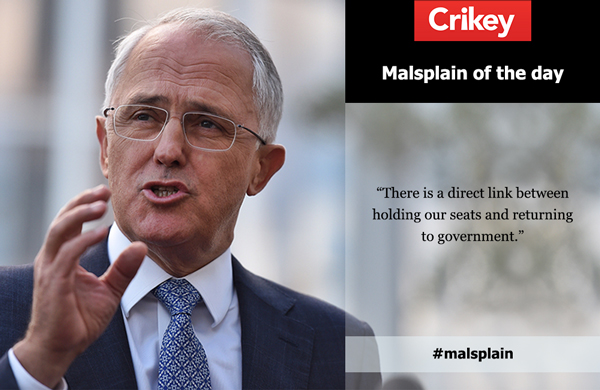 No doubt the former prime minister is licking his wounds after a couple of stringing attacks from his own camp. Former speaker and one-time leader of the Tony Abbott fan club Bronwyn Bishop told Sky News last night that the two no longer had a close relationship, before she effectively confirmed that she voted for Malcolm Turnbull in last September’s leadership ballot. She also said she only resigned as speaker to protect Abbott. Sympathy for Abbott has been scarce in recent times, but you’d have to feel a tad sorry for the ex-PM on this one considering he was widely criticised for protecting Bishop after the “Choppergate” affair. And if that weren’t enough, former federal attorney-general and Liberal veteran Tom Hughes described Tony Abbott’s election to leader of the Liberal Party as a potentially catastrophic decision, like having the “lunatics in charge of the asylum” or putting a “bull in charge of a china shop”. The comments have been revealed in Hughes’ new book, which is set to be launched later this month by his son-in-law, none other than … Malcolm Turnbull. We could have filed this under “Sniping and Undermining”, but since Abbott isn’t vying for the top job anymore, this seems to be more about just being nasty.

Yet another MP has failed to declare something on the Register of Members’ Interests. Hasn’t anyone been listening to Nick Xenophon and his calls for greater transparency? The latest blunderer is Nick Xeno … Oh dear. The South Australian Senator said he felt embarrassed that he didn’t declare his directorship of a company owned by his father, which once owed the ATO $2.5 million. He’s since apologised, taken full responsibility and vowed to bring in an independent auditor. It probably won’t derail his campaign, but he’s in for a few days of grimacing and looking contrite until the next dolt does something stupid.

There are few things more excruciating than seeing politicians talking about popular films, bands or TV shows, because they invariably end up sounding like an elderly grandmother discussing Top 30 music with her teenage grandson. Awkward, ill-informed and embarrassing. Somehow, Foreign Minister Julie Bishop managed to surprise us all when she shot this tweet back at The Daily Telegraph for mocking her outfit choice yesterday. As a politician, Bishop has spent her time around delusional, megalomaniacs. Must be why she likes Kanye.

This long election campaign has been taxing on everyone, not least of all the journalists who patiently follow the candidates on the trail. So it’s fair to say that a quick kip every once in a while is just the tonic to keep everyone on top of their game. Queensland journalist Jessica Marszalek didn’t settle for a hammock, she wanted luxury.

Can confirm a $75,000 mattress is very comfy… The places a campaign takes you… #ausvotes pic.twitter.com/YGHPjOWbOo

Ming the Merciless lives up to his name and gets savage on Nationals MP George Christensen. On the bright side, if he fails in his reelection bid, there’s a job opening at the Safe Schools Coalition.

Perhaps the only truthful thing this political leaner’s ever said. Make sure he loses. #ausvotes pic.twitter.com/C6EQlj2vo0

Turnbull is trying to save Jamie Briggs in the South Australian seat of Mayo by promising to build a sports hub. Shorten is using tourism promises to try and take back the Tasmanian seat of Bass. The Greens want to make 10,000 more family reunion places available each year. Proposed GST increases are “dead”.

So Mr Breheny do you not think that the subsidies paid to existing fossil fuel power producers is protectionism?

Turnbull voted against company tax cuts in 2011, shorten’s mob a bit slow on that one.

Simon Breheny, “… Turnbull toured a mattress factory … mentioning that mattress tariffs are decreasing from 19% to 0% by 2019 under the Australia-China Free Trade Agreement… a positive story”.
If I could be arsed, I’d start a Word.doc of this shill’s comments, to be enjoyed post July 3rd.