Chef in detention ... corflutes for all ... Bronwyn Bishop's musical taste ...

Detrimental as anything. A chef working at Melbourne “pay as you want” restaurant Lentil as Anything has been placed in immigration detention after his application for refugee status was rejected. Kalaichelvan Murugaiah has worked at the Abbotsford restaurant for two years, according to founder Shanaka Fernando, and has been in Australia for four years. In a Facebook post on Lentil as Anything’s page yesterday, Fernando compared the treatment to Nazi Germany:

“Yesterday our chef Kalai was invited for an interview by immigration and detained. The treatment he received was nothing short of barbaric. This, for a man who has spent 6,120 hours over the last 2 years voluntarily cooking for our community.

“I was with him when this unfolded. We arrived at 9.25 for a routine meeting and announced ourselves at the reception. The immigration compliance officer asked me to wait outside the interview room until he calls me. An hour later he emerged and told me that Kalai ‘is going to be a while’ I asked how long?He said, ‘the gentleman is being detained’

“I was shocked. This was like nazi Germany when the Jews were asked to have a shower. Kalai has been fully compliant and respectful of the laws in this country. If he was told that he has to submit himself to immigration to be sent back to Sri Lanka , he would have said his goodbyes and presented himself, with his dignity intact. Instead, he was berated in the room, taken downstairs and shoved into a waiting van by three burly men and driven to the Broadmeadows transit centre. This is the best that educated bureaucrats could muster in gratitude to a meek, vulnerable human being.”

Fernando told Crikey this morning that Murugaiah was in Australia on a bridging visa and had his application for refugee status rejected. He had appealed through the Refugee Review Tribunal and directly to the minister without success. According to a change.org petition, Murugaiah would be in danger in Sri Lanka from police harassment and people smugglers who have threatened his life. Fernando says that Lentil as Anything employs many refugees and this isn’t the first time he has experienced one of his staff being deported. “One of them actually died in Nepal, after being deported,” he said.

“As an alternative, introduce flexible weekend penalty rates, whereby current penalty rates paid on Saturdays and Sundays would instead be paid on any sixth or seventh day of the week worked by an employee. This change recognises the fact that we live in a more flexible society where the preferred days of rest are no longer necessarily Saturday or Sunday. This change would retain current penalty rates and continue to provide a weekend guarantee for each employee (as an employer would have to pay penalty rates to an employee who works six or seven days per week),while giving businesses the flexibility to structure their employment arrangements such that they can open on Saturdays and Sundays without incurring penalty rates.”

Crewther is one of 12 authors on the report, but he claims it as his own idea on his LinkedIn page. Penalty rates are one of the major issues being pushed by the unions, who are targeting the seat formerly held by Bruce Billson. Crikey contacted Crewther to ask about his views on penalty rates, but didn’t hear back by deadline.

Everybody gets a corflute! Yesterday we wrote that a voter in Goldstein had not seen a single corflute in her seat, and now we have received an offer from the Greens candidate in the electorate, Cheryl Hercus, who says she is happy supply a corflute to anyone who wants one: “I would be more than happy to supply one of my corflutes to your reader if she would like one. We will even attach it to her fence, or on a stake in her garden.”

Hercus says she’s even had good feedback from Liberal voters:

“Sure, it’s hard being up against ‘Freedom Boy’, but we’ve been putting up Greens placards for weeks. So far have place around 30. And the response on the ground when handing out flyers is good. I’ve had many a liberal voter tell me they’re not happy with the Liberals move to the right and won’t be voting for Tim.

“Not under any false illusions of beating him, but the Green vote will go up, as it will in Higgins and Kooyong.”

Safe Schools gets treacherous. La Trobe University’s vice-chancellor John Dewar has sent all staff an email regarding the suspension of Roz Ward, defending the university’s position and the Safe Schools program. Crikey understands it hasn’t gone down well with staff:

“La Trobe University has commenced a serious misconduct process with one of its employees. This process has been made public by other parties, including the NTEU, and has now become the subject of considerable public commentary.

La Trobe University confirms that it is following the disciplinary procedures described in s77 of the Collective Agreement negotiated and agreed with the NTEU. The agreement is available on our web site.

Our letter to the employee commencing this disciplinary process clearly states that the University has not made any determination and that no such determination will be made until the process in clause 77 has been followed.

We are following the steps outlined in the Collective Agreement and will continue to do so.

On Friday 27 May, when the University was first made aware of the circumstances of this case, we released the following statement:
‘While the University respects academic freedom and the importance of free speech, we are concerned about the impact these comments could have on the good standing of our researchers in this field and the University takes this very seriously.’

La Trobe University confirms we have full faith in the quality and integrity of the work being conducted by the Australian Research Centre into Sex, Health and Society (ARCSHS). The Research Centre has been undertaking research for 25 years and is recognised and respected internationally as a leader in this area. Last year, ARCSHS research was rated five out of five (well above world standard) in the ARC’s Excellence in Research of Australia process.

This research underpins the important work of the Safe Schools Program, which we fully support. The program helps support young Victorians who are subject to schoolyard bullying and abuse due to their sexual preference, and who are consequently at greater risk of self-harm and suicide.

On the application of Academic Freedom, La Trobe University confirms that it values independent thought and academic freedom. These values are enshrined in our Collective Agreement at clause 9.2, which clearly encourages staff to talk freely in their area of expertise and knowledge.

Bronny takes to the Sky. How is Bronwyn Bishop’s retirement going? Well after she was dumped by Liberal Party preselectors, Bishop has found herself a gig on Sky, which started with a bang last night. How else will she be spending her time?

“I’m still very involved with things like the Sydney International Piano Competition, which is about to start on the 6th of July. Thirty-two of the world’s best pianists coming to Australia.”

And we thought she was a Jimmy Barnes fan?

Guess who? Which Labor MP had dinner at Melbourne’s Flower Drum with 12 of his union mates? They were seen last night tucking into lobster and fine wine. Know more? Drop Ms Tips a line.

Guess who, part II. Greens candidate for David Feeney’s seat of Batman in Melbourne’s north, Alex Bhathal, has already blamed a Labor billboard for her campaign office being covered in graffiti, and a tipster tells us the imagery is being used in letter-boxing as well:

“Labor has been letterboxing in Batman with the following flyer (the green alien-like hand for the Greens figure is a nice touch). I live north of Bell St, which is the supposed divide between the traditional Labor voting territory in the north, and the stronger Greens territory in the south. I wonder if the same material (and approach) is being used throughout the electorate?” 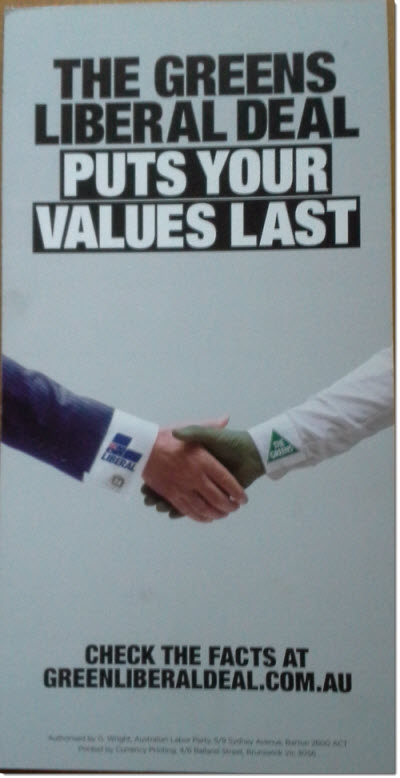 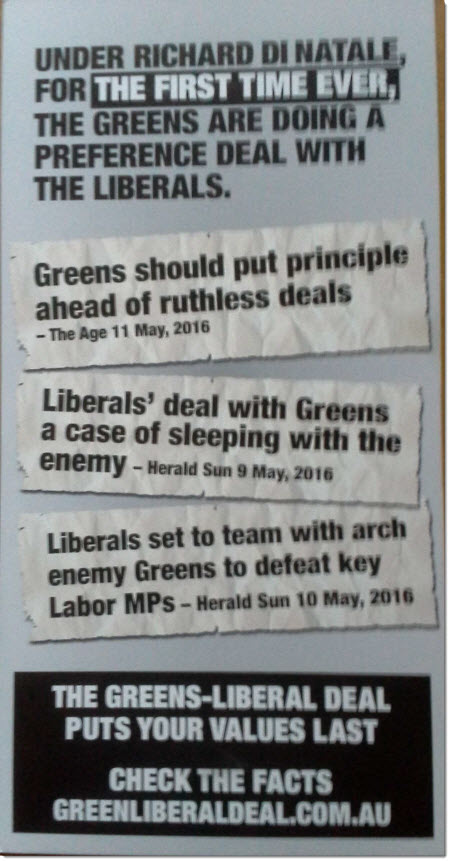 Unless it is Lentl, then Lentil’s chap is either exceptionally well paid, for an average of over 8 hours per day for 2 years, or criminally exploited.
Then Crewther talks of pay rates.
LaTrobe’s response is pure MBA verbiage.
Can’t argue with the point of the Lib flyer.

Glorious schadenfreude to watch Latrobe Uni’s abject backdown on Roz Ward’s suspension .
“La Trobe University has withdrawn its suspension of the academic Roz Ward, because a high-profile legal battle would be against the university’s interests, vice-chancellor Professor John Dewar has said.”
Quite made my Friday 🙂