WHO WON THE DAY? Bernard Keane, Crikey politics editor: Economic growth numbers handed the government an easy win — although the ghost of superannuation continues to extend its icy hand at the Liberals. When will they exorcise this unholy spectre from beyond the tax-effective estate planning-friendly ostentatious family vault at Waverley cemetery? But given NSW and Queensland were […]

Bernard Keane, Crikey politics editor: Economic growth numbers handed the government an easy win — although the ghost of superannuation continues to extend its icy hand at the Liberals. When will they exorcise this unholy spectre from beyond the tax-effective estate planning-friendly ostentatious family vault at Waverley cemetery? But given NSW and Queensland were focused on matters sporting, it might not have mattered much.

Dennis Glover, veteran Labor speechwriter and fellow of Per Capita think tank: In a technical sense, it has been a bad couple of days for the Coalition, with their superannuation policies unraveling. Should they win, super is likely to become the great lie of the election and the wealthy superannuates’ dishonest campaign will result in more wealth trickling up to the top. But people don’t change their votes over tactical errors and inconsistencies, so perhaps little solace there for the ALP.  Turnbull got his mojo back talking about innovation, but most voters know that few ordinary people benefit when Malcolm’s Point Piper neighbors invent a new piece of software and then move their publicly subsidised operations overseas to avoid Australian tax, which they inevitably do. My guess is that the real action in this phony war period of the campaign is in the marginals.

Dr Zareh Ghazarian, political scientist, author and media commentator: Kelly O’Dwyer made an important appearance in the campaign to try and explain the government’s superannuation policy, but really more fuel to the fire the government appears unable to quell.

John Connolly, founder of John Connolly and Partners public relations firm: On the front page test this morning only The Australian really featured anything to do with the election. Every other editor understood that footy (of whatever code) is the only real religion in this country. What is clear is that super is becoming a real election issue. While most of us mightn’t understand super, let alone the proposed changes, we all love it and we hate any threat to it. Remember the anti-mining tax campaign was based on what fiddling with resources companies would do to hurt our super. All this goes to demonstrate that the longer this campaign goes on the worse things will get for the government. The other thing to think about is that Labor have shown in state elections that its real strength is campaigning in electorates v big state campaigns. Sport was the winner today with the election second and the government kicking an own goal to give the opposition a win.

Narelle Hooper, journalist, author and corporate adviser: Arghh — four weeks to go in this massive delusional political indulgence. While a shrinking, sleep-deprived, caffeine-fueled political and media cohort schleps around the nation obsessed with daily scorecards, cash splashes and gotcha moments, the coverage is sliding out of the front pages, down the news bulletins and off our Faceplant feeds. Don’t you realise — nobody believes you anymore and NOBODY IS LISTENING! 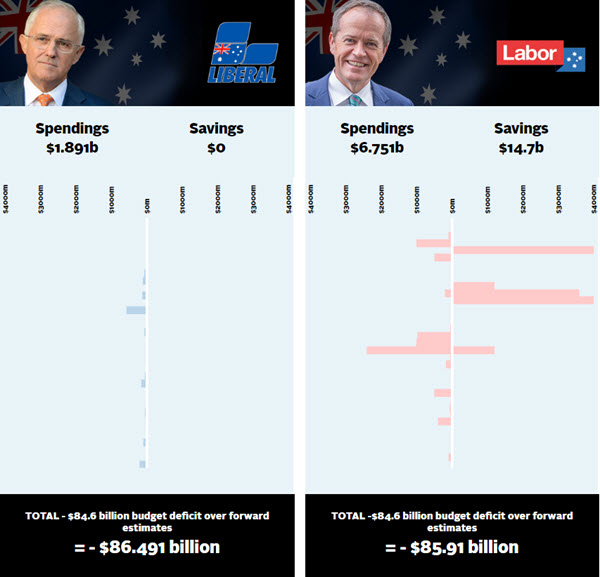 Both sides rein in the spending promises; the Coalition promise money for infrastructure in NSW and Queensland while Labor propose an addition to the PBS.

Malcolm Turnbull: The PM is in Sydney today and will be focusing on innovation in the manufacturing and export industries. The Coalition’s 10-year company tax cut has taken a blow after the Parliamentary Budget Office today released an analysis of the proposal and found it would cost $3 billion more than previously estimated by Treasury. Scott Morrison held a press conference where he defended the government’s tax cut plan as well as the proposed changes to super and attacked Labor’s fiscal policies. Seriously mixing his metaphors, Morrison labelled Labor’s taxes “bullets” before saying:

“Labor’s approach is to take a sledgehammer and to do it out of the politics and ideology of envy as part of their war on growth, it’s a war on capital, it’s a war on mums and dads who just want to invest in a property to ensure their betterment over into their retirement or whatever their purpose is.”

Bill Shorten: There was a rat in Labor’s ranks this morning. Bill Shorten started his day bright an early at the Sydney Fish Markets with Deputy Leader Tanya Plibersek. The pair were handed a rat by a woman who asked them to look after it while she took a phone call. There is some suspicion that The Chaser might be involved. Following yesterday’s big solar power promise Shorten will continue to focus on renewable energy today.

Richard Di Natale: The Greens will focus on transport infrastructure today and are expected to announce a $10 billion public transport plan, which will include light rail projects and bike and walking paths. Proving that he’s down with the kids, MP for Melbourne Adam Bandt chatted to BuzzFeed on Facebook live, which has proven a popular platform for politicians this campaign.

Barnaby Joyce: It was a busy day on the Wombat Trail yesterday as Barnaby Joyce grappled with barbs from ex chiefs of staff and world leaders alike. Responding to Peta Credlin’s assessment of Joyce’s contention that Tony Abbott still had leadership ambitions as “horseshit”, he said:

“I’m not going to commentate on commentators. Nor am I going to get into a debate on the equine minutiae of what’s happening on the trail.”

As of yet, there has been no pithy response to Indonesia’s foreign spokesperson; ABC’s Jakarta correspondent reported that the spokesperson had called Joyce’s comments on the link between live cattle exports and asylum seekers “false” and “naive”. Joyce will today be campaigning in the marginal Queensland seat Capricornia and is expected to make an announcement on health in Rockhampton.

Senator Glenn Lazarus, former member of the Palmer United Party, now leader of the Glenn Lazarus Team has apparently borrowed fellow independent Nick Xenophon’s party manifesto. The former rugby league player’s manifesto appears almost identical to the NXT manifesto, other than the inclusion of a football-shaped logo. Lazarus has said that many independents have used the same format and that it’s an example of crossbench collaboration. Xenophon didn’t seem too upset about this development:

“Imitation is the sincerest form of flattery. If my constitution was useful to him then I’m glad. I’m very relaxed and comfortable they used it.”

Meanwhile, in what has become a saga of Odyssean proportions, Xenophon has again found himself in a campaign-poster related fight. This time South Australian MPs Christopher Pyne and Jamie Briggs are accusing NXT of stealing Liberal posters. 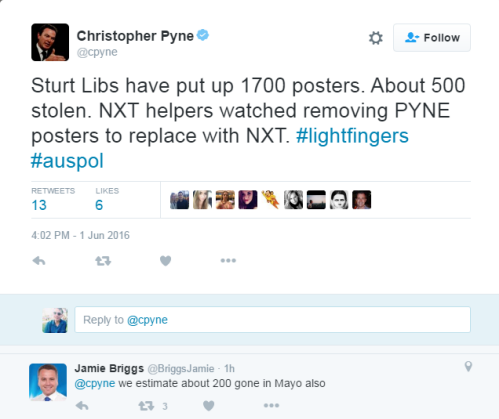 Turnbull regained his ascendancy in media mentions yesterday, but as many of these mentions would have been related to dissent over super he might not be too pleased. 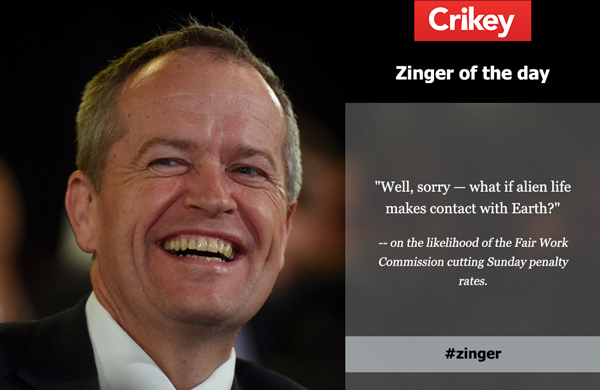 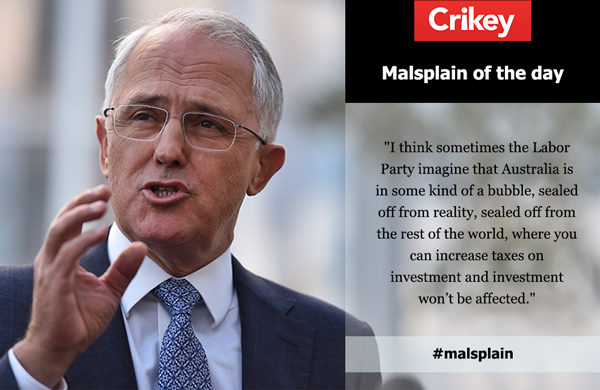 Yesterday was all about super as reports emerged that the Coalition are in disarray over their proposed changes to super tax concessions. A number of conservative frontbenchers and backbenches are reportedly vowing to fight the changes if re-elected, and some Liberal branch members have quit the party in protest. Arthur Sinodinos told Sky News last night the party would hold consultations on the changes after the election. Malcolm Turnbull is sticking by the measures:

“The budget which comprises, obviously, the superannuation changes has been presented by the treasurer and has the full support, naturally, of the government, the cabinet and the party room.”

Perhaps the biggest challenge for all sides of politics is to find candidates who can adequately explain super policy. Following Julie Bishop’s “gotcha” moment on Monday, Sarah Hanson-Young struggled to explain the Greens’ policy on progressive tax rates for super contributions on ABC radio. She mistakenly claimed that the Greens plan was to tax super at the same rate as income tax, before clarifying her comments on receiving a text from her chief of staff.

Meanwhile Bill Shorten is having to deal with disunity in Labor’s ranks after frontbencher Lisa Singh joined a number of backbenchers in signing a pledge supporting the abolition of the diesel fuel rebate for mining companies.

“‘I’m not going to have some sort of giant witch hunt that every individual has to agree with me,’ he said in Brisbane, guaranteeing no change to the diesel fuel rebate. ‘If we’re going to talk about five MPs signing a petition, why don’t we talk about the 61 Liberal MPs and candidates who don’t support and want to slash penalty rates?'”

It often seems that politicians would be wise to steer clear of football and sports all together. Malcolm Turnbull landed himself in hot water some weeks back when he called AFL “the most exciting football code” despite ostensibly being a rugby union fan, and Bill Shorten embarrassed himself yesterday when he  confused the Queensland Maroons with the Melbourne Storm and Christopher Pyne called Cooper Cronk “Cooper Croc”. Nonetheless we did enjoy this ScoMo photobomb at the State of Origin last night. 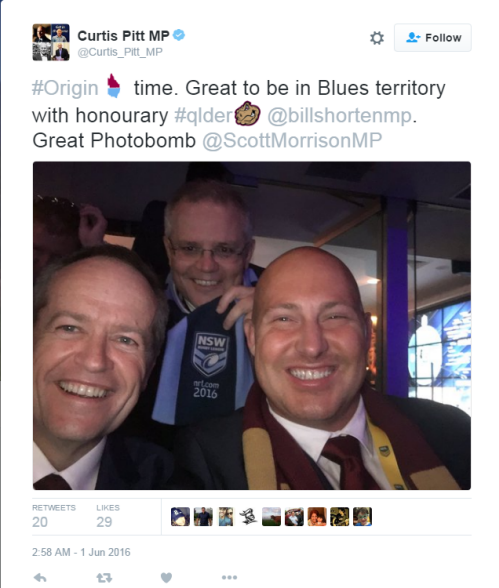 Traditionally “rats” aren’t looked on too fondly in the Labor movement, but Tanya Plibersek seems to have adopted a rather cute one after someone — perhaps the Chaser team — left it behind at the Sydney Fish Market. 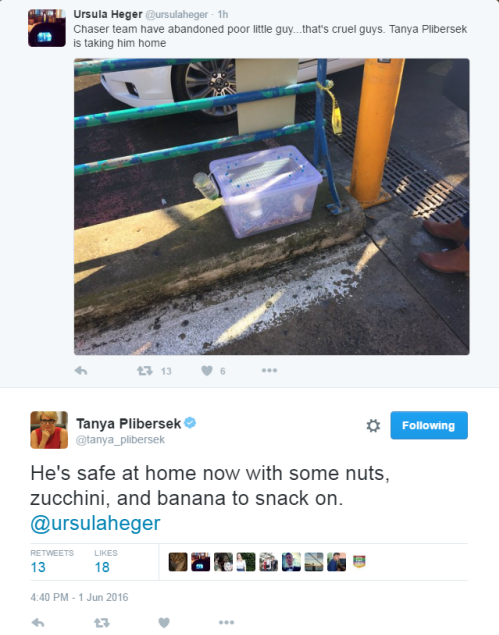 The Coalition have a super-big problem when it comes to their proposed changes to tax concessions; but there’s some good news on growth. But as our experts have pointed out, the campaign has yet to grab voters’ attention and voters are probably more interested in the footy.

“The PM is in Sydney today and will be focusing on innovation in the manufacturing and export industries.”

Don’t tell me, was he announcing a tax cut for innovation?

Sometimes I think Malcolm lives in a bubble, where businesses mope around all day saying, “You know, I’d like to make more money, but that difference between a 30% company tax rate and a 27.5% company tax rate is just an insurmountable problem.”

The PM will be focusing on innovation on manufacturing & export…”.
Could he name a single innovative & agile manufactured product that we export?