The Herald Sun has had to defend itself against claims it breached the Victorian Racial and Religious Tolerance Act.

Does the claim that Islam has to change, to “cohere with the Australian way of life, our values and institutions” as new MP Andrew Hastie put it in a front-page Herald Sun splash, amount to religious vilification? What about the claim Islam contributes to “mediaeval teachings and practices”, as Victorian MP Michael Sukkar put it? Or LNP politician George Christensen saying terrorists are doing committing horrific acts “in the name of Allah”?

Those were the questions asked in Victoria’s Civil and Administrative Tribunal this morning, as Palestinian refugee Aladdin Sisalem argued the Herald and Weekly Times — publisher of the Herald Sun, which asked a number of MPs for their views on Islam last November — had breached section 8 of the Victorian Racial and Religious Tolerance Act, which bans “conduct that incites hatred against, serious contempt for, or revulsion or severe ridicule of” someone on the basis of their religious belief. The controversial comments by Government MPs prompted a warning by ASIO chief Duncan Lewis that an estrangement with the Muslim community would not aid Australia’s counter-terrorism efforts. 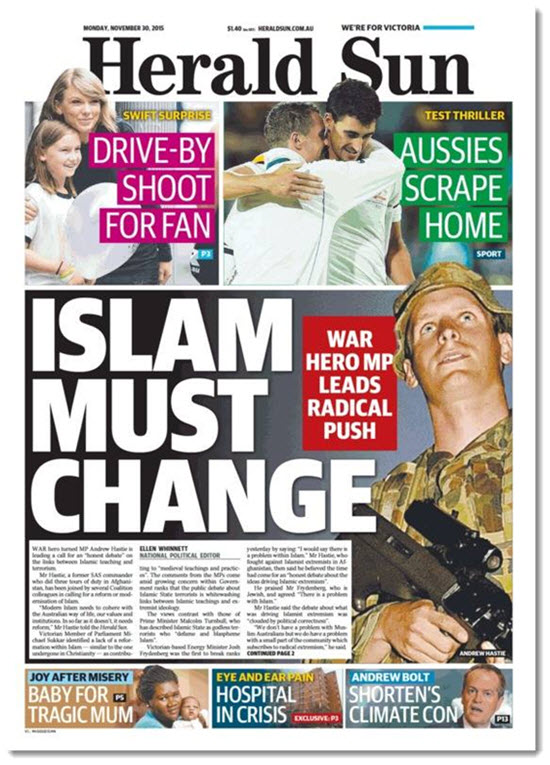 Sisalem also argued the Herald Sun had breached a number of other clauses that fall under “serious vilification”. But barrister Haroon Hassan, representing the Herald and Weekly Times, successfully argued those charges should be struck out, as they fell outside the jurisdiction of VCAT.

Sisalem, a student, was self-represented with the aid of a translator. He spent 17 months on Manus Island from 2002, of which 10 were spent as the only person in the detention centre with just a cat for company. He was finally released and settled in Melbourne in 2004.

Also appearing in court was the Herald Sun’s federal political editor Ellen Whinnett, who was the author of the article. She was cross-examined by Sisalem but only had to answer one question, as almost everything he asked her was ruled out of order. VCAT member Julie Grainger told Sisalem he could only ask questions relating to Whinnett’s witness statement, to help determine whether or not a breach of the act had occurred. Asked what the “event” that prompted the article was, Whinnett said it was “a report of statements by MPs”.  She said the story was political reporting in the public interest, “highlighted tensions between the views of various members of the government.’’

In closing arguments, Hassan said the Racial and Religious Tolerance Act was expressly set up to allow legitimate reporting of the kind done by the Herald Sun.

“There is express recognition of the right of free speech — critically, that freedom of speech is an essential component of a democratic society, and should only be curtailed when it is absolutely necessary.”

Tensions within the Coalition over how to speak about Islam had been first explored through a Sky News interview with Josh Frydenberg, he said. By documenting the views within the Coalition, the article was “a robust piece of political reporting — an exemplar of the free speech the act wishes to preserve.”

It’s possible some would be offended by the statements in the article, Hassan said. “[But even] great offence … does not amount to vilification.” The article, he added, fell “well short of the sort of noxious behaviour” the act wished to proscribe.

Even if the article was the type of conduct banned by section 8, Hassan argued, the Herald and Weekly Times could rely on two of the exemptions to that section contained later in the act — one relating to public interest, and another for “making or publishing a fair and accurate report of any event or matter of public interest”.

Sisalem, Hassan noted, had had the opportunity to challenge Whinnett’s witness statement, and had not been able to do so. “Whinnett is one of the most senior reporters in this state covering the affairs of the nation. .. She has a Walkley award … Her evidence can be accepted without hesitation”.

Sisalem argued he was not responding to the “offence” caused by the article. “Is this … likely to make someone hate [the] religion? That is the issue,” he said, giving his closing arguments without the aid of his translator.

He questioned the public interest served by the article, said terrorism was not the fault of Islam but of war and dispossession, and said if anyone could prove Islam caused terrorism, they should ban it, rather than subjecting its adherents to continuing and dangerous vilification.

He also asked what a “war hero” like Hastie knew about religion, and questioned why the Herald Sun had not interviewed experts on religion (Hassan later told the tribunal it was not its place to “determine the theological propriety of the article”). He also said the article lacked balance, and only quoted MPs with one point of view.

“This is the only country I have,” Sisalem said. “I’m not going to allow politicians to turn it into a war zone.”

Sisalem said he wasn’t a lawyer, and he was unfamiliar with these type of proceedings. But he said he had turned to the court for protection.

“I had an incident in the street. Someone thought I was Muslim and abused me. And then I saw this article. And I suffered.”

Sisalem said articles like this made him fear for his personal safety, and for the safety of others in his community. “I looked up the law to see what could protect me. I found section 8 — which was completely broken.”

“I ask the tribunal to look at the consequences of this article, and if it could help anyone in any way, and whether it can harm.”

She asked Hassan whether the Herald and Weekly Times was seeking costs, to which he responded that his client had “reserved the right” to do so.

“I wouldn’t have thought very much work arose [from the case],” she remarked.

A judgment is expected in four to six weeks.

The unrepresented refugee v News Corp: no surprises who won

‘Bolt and News Corp want a pound of something’: defamation case kicks off

Now here is a thought, …if only Christians would stop attacking Muslims in Afghanistan and Iraq on some pretext or other perhaps things might improve.

Wouldn’t that piss off the god that is on our side? Think, man! Think!

Is Hastie really, really worried about Islam’s medieval teachings? He should have a talk to his bishop about his concerns over transubstantiation. FFS.

Nobody thought the pic was a little provocative? It is how Hastie chooses to appear to the electorate.

A few weeks ago the Herald Sun (Sunday I think) ran an article titled “Islamic Estate” about Muslim families buying houses in Melton. I think that would have to be about the most offensive headline I have ever seen.