Dispatch from Maribynong. Ms Tips often feels a bit of sympathy for the candidates who do their party duty and run in unwinnable seats, but according to this tipster the Liberal candidate in Bill Shorten’s seat of Maribyrnong, Ted Hatzakortzian, has just enough chutzpah for the job:

“I live across the road from Bill Shorten’s electoral office in the seat of Maribyrnong and three times in two weeks, the Liberal candidate has placed himself & his volunteers essentially right out the front, which is next to a busy crossing at a Moonee Ponds shopping centre. Very optimistic of him given the safety of the seat.”

Do-nothing Joe. While Scott Morrison is spending his days talking about budget black holes within black holes, the man he replaced seems to be having a swell time in the USA. Former treasurer and now ambassador to the US Joe Hockey has been meeting with US politicians and Australian sports people, but according to this tweet by Sandi Logan, he’s been doing too much of the latter and not enough of the former:

Rice to fight firing. The fallout from Channel Nine’s 60 Minutes scandal continues, with sacked producer Stephen Rice lawyering up to fight his sacking. Rice’s lawyer John Laxon has called Rice a “scapegoat” for Nine in the bungled kidnapping in Lebanon and has accused Nine of failing in its duty of care to the producer.

Ms Tips hears he isn’t the only one unhappy with which staff have been punished while others survive to work another day. A tipster tells us that sound recordist David Ballment did raise queries about the safety of the shoot, but he was overridden before it went ahead. Ballment, along with cameraman Ben Williamson and reporter Tara Brown, were censured by the network but didn’t lose their jobs.

Spend-o-meter. After Sunday night’s debate involved an hour of duelling press conferences, it’s nice to see a moment of lightness, a gimmick to break up the monotony. The Liberal Democrats have put together their own kind of spend-o-meter — give it a spin and it will spit out a random spending promise. Our favourite is “The Greens are proud to pledge $300 billion for agile and innovative duck crossing for Aussie families” followed by “The Coalition are proud to pledge $400 bajillion for multi-national community swimming pools to fight the War on Drugs”. You can generate your own spending announcement here, but be careful, it could take your whole afternoon.

World’s Best Minister saves Great Barrier Reef. Environment Minister Greg Hunt doesn’t usually come across as having a great sense of humour, but we thought he had to be pulling our leg with this tweet yesterday, that proclaimed “Under Labor, the Great Barrier Reef was on-track to be listed as ‘in danger’. It came off the ‘watch list’ under us.” 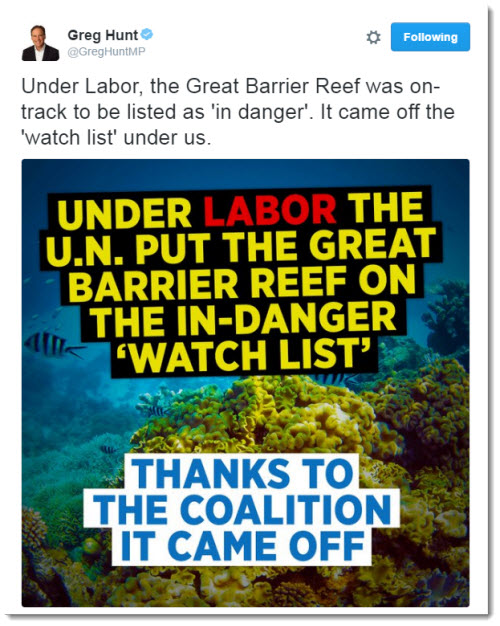 Just days after The Guardian revealed that the Australian government had intervened in a UN Report on “World Heritage Tourism in a Changing Climate” to remove a whole chapter on the Great Barrier Reef, as well as any other mentions of Australia. Maybe not quite the right time to be be bragging, Minister.

New gig for Triggs. President of the Human Rights Commission Gillian Triggs has another title to add to her name — she’s just been appointed as the chair of RMIT University’s Juris Doctor Advisory Board. She was previously Dean of the Law School at the University of Sydney. Maybe she will advise RMIT that Australia already has a glut of law graduates.

David Feeney’s latest. Labor frontbencher David Feeney is trying his best to recover from a series of gaffes in which it was revealed that he hadn’t declared one of his houses on his interest register, failed to articulate Labor policies, and then left his talking points in the waiting room at Sky. Yesterday he tweeted that a school in his electorate had secured $500,000 for new facilities, but that hasn’t got a great reaction from locals — the Maharishi private school is under investigation by the Victorian Registration and Qualifications Authority after half the students left last year, leaving it with fewer than 50 students. 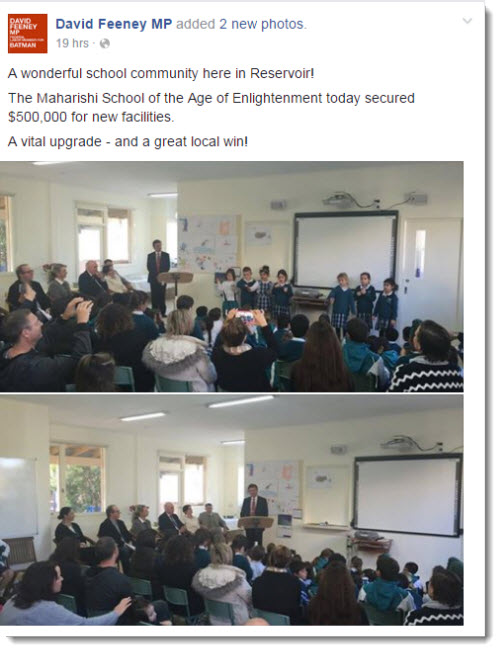 According to The Age:

“Some concerned parents claimed the school repressed physical activity such as soccer, basketball and ‘tiggy’ because it was not peaceful enough, according to a confidential report.

“The report, which was commissioned by the school and written by Lyngcoln Consultants, found high levels of stress among staff, “with the ‘stress-free’ environment which had attracted them as a teacher, now not being a reality”.

“In the view of the consultants the school currently is not living up to its values or expectations of providing a stress free environment for staff, parents/carers or students,” it said.”

Rudd’s downfall: his own handiwork, and years in the making

This gratuitous garbage from the gHunt shows that the tories live in Bishop Berkley’s world.
When Morriscum refused to speak of on-water matters then they ceased to exist.
When the gHunt monsters the UN into removing the GBR’s plight from its report, it ceases to be in danger.
When no-one spoke of clerical sexual abuse, it didn’t happen.
When…

The lib dems are so useless that their random spending generator gives the same 3 or 4 pre programmed (I assume, because I saw the same ones over and over) Funnay Spending Promises. Even standard library psuedo-random number generators are more random than this. After about 10 times seeing it tell me about dank memes for climate change and duckcrossings for a fair go (often giving me the same one multiple times in a row) or w/e it dawned on me that some guy wrote these.