Remember when Malcolm Turnbull said he'd go on the ABC's Q&A? Hasn't happened. Plus other media tidbits of the day.

On Sunday night, the ABC simulcast the leaders’ debate on the ABC’s main channel and on News 24, which produced a national audience of 888,000 (747,000 on the main channel and 141,000 on News 24). Last night it restricted Q&A to the main channel (as it has done this year on all but one occasion) and it averaged 852,000 national viewers. It wasn’t simulcast on News 24 even though one of the guests was Greens leader Richard Di Natale. A News 24 audience close to the one achieved on Sunday night would have put the national total closer to the million viewer mark.

The Q&A format and the interaction between the guests, host Tony Jones and the audience was far more natural than what we saw on Sunday night, which was like Kabuki Theatre gone rogue. It was closer to the town meeting style on Sky News at the end of the first week of the campaign which averaged 52,000 on Sky News (or around 170,000 to 180,000 adjusting for the low penetration Sky and Foxtel has of the national TV market).

But don’t expect the major parties to understand the attractions and the improvement in the quality of the debate from having greater involvement from members of the public in the audience (which is one of the keys to Q&A and why Tony Abbott, that most controlled of politicians, hated the program).

Greater voter/audience involvement clearly terrifies at least the Liberal Party. In this morning’s Financial Review, in a story on the lack of fizz in Sunday night’s debate, the paper’s political correspondent Phil Coorey wrote: “ A senior Liberal source said there would be one more debate before July 2 but not like the Sunday night format. Details were being negotiated”:

“He said the problem with community forums was that they risked not canvassing the issues of the day, including those the government wanted to talk about, because voters often had personal concerns such as the lady in the audience three weeks ago who asked about Bosnia.

“He said debates had lost their status because of the 24/7 news cycle.”

In other words the Liberals at least are not interested in Turnbull facing voters with “personal concerns”, but putting the PM in a forum where he can spruik his and his party’s concerns, no matter how distant they might be from what voters are concerned about. Given that view, it’s no wonder Sunday night was dull and boring, and why Q&A sparkled in comparison. — Glenn Dyer

Where’s Turnbull? On this topic, Fairfax’s Matthew Knott reports that the Prime Minister hasn’t been on the show since winning the ballot, and he isn’t expected to go on during the campaign.

“I’m not sure there’s much in it for us — it’s just another chance to f-ck up,” a Coalition strategist reportedly said.

The last time Turnbull went on 7.30, he promised to come back during the campaign. He has yet to do so.

Last newsstand. The UK newspaper sector is falling into the slough of despondency after last week’s surprisingly weak half-year figures and profit downgrade (for its papers) from Daily Mail and General Trust, but in America — where realism has been a fact of life for several years — the sector is heading for a second year of mergers and acquisitions activity at levels not seen for eight years.

In 2015 we saw the largest number of deals for the largest amount of money since the 2008 financial crisis, with 70 daily newspapers being sold for a combined US$827 million, according to mergers-and-acquisitions adviser San Diego law firm Dirks, Van Essen & Murray.

Now in 2016, Gannett is back with one deal whose value exceeds the value of those 70 deals in 2015. It wants to buy the Tribune Publishing company for US$864 million. Other deals so far this year include New Media Investment Group Inc buying Journal Multimedia for US$18.0 million in early May and Freedom selling the Orange County Register and Riverside Press-Enterprise for US$49.8 million in a court-approved sale to Digital First Media, owner of the Los Angeles Daily News. These three and several smaller transactions have boosted the figure so far this year to close to US$1 billion.

Many of these sales are final transactions; the next buyer could be closing it. But in little reported comments last week, the owner of 32 dailies and 47 weeklies was unusually optimistic about print. Warren Buffett told a USA Today columnist that “It’s almost unnatural how much I love newspapers … We would never sell a newspaper. I want to be the last guy standing.” But Buffett also makes sure he buys papers with local monopolies, with very little competition from other media as well (radio and TV). In the 15 months to March 2013, Buffett’s company paid a total of US$344 million for 28 daily newspapers of varying sizes. — Glenn Dyer

Front page of the day. Far be it from us to feel schadenfreude for a dog smuggler … 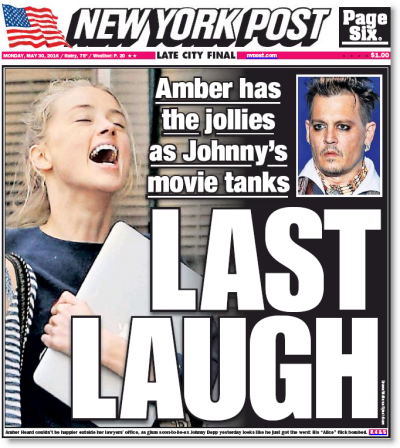 I watched QandA on ABC News 24 last night. Only way to see it live in the West on a proper telly.

I liked Depp in ‘… Gilbert Grape” but recently he’s made Jack Sparrow look like Einstein.
Wo ‘appened? Are tattoos so toxic?

His marriage break-down is getting a fair bit of coverage here too – especially in Limited News. Then again he did embarrass Cousin Jethro (Deputy Limited News Party PM) on the world stage?
….. Did Limited News take to Rupert’s matrimonial dysfunction with Deng with similar zeal?