The Coalition has moved back into the lead at the business end of the season, today's Essential Report shows. And the deterioration in Malcolm Turnbull's personal standing appears to have bottomed out.

The Coalition has regained a lead for the first time since mid-April, with today’s Essential Report polling showing a fall in Labor’s vote. The two-point drop to 35% in Labor’s primary vote means the Coalition, with a stable primary vote of 41%, takes a 51%-49% two-party preferred lead with five weeks to go; the Greens remain on 9% and the Nick Xenophon Team is up a point to 4%. 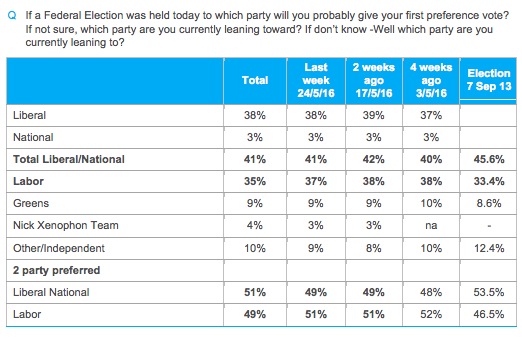 On a (unlikely) uniform national swing, 51%-49% would deliver Labor just five seats, leaving Malcolm Turnbull with a sizeable majority. Confirming that the worst is over for the Coalition, the fall in the Prime Minister’s personal ratings is also finished: after a brief dip into net negative territory a fortnight ago, his approval rating is up a point to 41%, while his disapproval rating is down three points to 39%. Bill Shorten, meanwhile, remains almost exactly where he has been for several weeks, with a 10-point (34% approval, 44% disapproval) net disapproval rating. The only good news for Labor is that Shorten has further narrowed the gap as preferred prime minister, with Malcolm Turnbull’s lead now down to 13 points (40%-27%) compared to 15 points a fortnight ago. In December, Turnbull led Shorten by 39 points.

The poll, however, also reveals a disturbing level of ignorance about the basics of the coming election: 23% of voters don’t think the election is in July, with 8% believing it’s in June, 4% in August, around 2% later, and 9% who don’t know at all. And just 50% know that they’ll be voting in a full double dissolution election: 8% think they’re voting in a normal half-Senate and House of Reps election, another 8% think it’s only for the House of Reps and 34% didn’t know. Liberal and Greens voters were the most knowledgeable, while Labor voters appear significantly more clueless about what they would be voting for.

And 36% of voters were unable to identify the current Treasurer, with 13% saying the ambassador to the United States of America, Joe Hockey, was treasurer (including 18% of Greens voters); 64% identified Scott Morrison. In each case with these questions, older voters were far better informed than younger voters: just 62% of voters under 35, for example, knew the election was in July; only 44% of under-35s could identify Scott Morrison as treasurer.

There was, however, support for amending current laws that enable governments to hunt down and prosecute any whistleblower revealing government information, no matter the public benefits from it. In the wake of remarkable mid-election raids on Labor at the behest of an embarrassed NBN, half of all voters believe current laws that enable the pursuit and jailing of whistleblowers should be confined to national security matters, while 30% support existing laws. There was a strong partisan divide to the issue: Coalition voters more strongly support the current laws (45%) than support a national security limitation (41%) while 54% of Labor voters and 78% of Greens voters back limiting anti-whistleblower laws to national security matters.

Essential also asked voters about how they viewed Malcolm Turnbull and Bill Shorten in terms of social interaction. Turnbull was generally much more positively regarded than Shorten: 53% said they’d ask Turnbull’s advice about investing money, compared to just 11% who would ask Shorten; 34% said they’d trust Turnbull to give their children advice about the future compared to 17% Shorten; Turnbull was the preferred dinner guest (38% to 22%) and the preferred negotiator for a pay rise (36% to 27% for former union leader Shorten). However, Shorten was preferred as someone to look after your pet (no comment), preferred as someone to go to the pub for a beer, more likely to lend you money and more likely to help you.

I meet quite a few who don’t know the Election Date; but most of them do know that Australian Citizens need to be extremely wary of the types of candidates who are the beloved of the Crikey Commissariat and their Censorship Teams.

All that just confirms my suspicions that your respondents are a pack of drongos!!
NO ONE in their right mind would vote for this current putrid government!!!

Norman the Troll, being over 80, probably only has friends and acquaintances who are either considerably over the hill or ga-ga or both, the natural supporter base of the Liberals.

I was only going to comment that I wouldn’t accept financial advice from Turnbull (or any politician). At least Turnbull’s advice would be better than Abbott’s who had told the ANU that their decision to divest coal mining shares was a mistake before coal mining went into its deep slide.

Democracy – on a see-saw of ignorance?

There has been little comment, apart from… err.. me, that the great unknown in this election will be chunk of the electorate who do as they have done for the last 30yrs, just ‘make their mark’ in a single box in the Senate, above the Line..
Given that 96%+ of the electorate have done only that for so long, despite this usually being against their own best interests (however incoherent, indeed inchoate), I’m looking forward to the Boxing Day, or Daze as it could become, after the chrissieday surprise of finding a brand new… somewhat damaged, impaired and shop-soiled simulacrae of ‘good government’ under the wilted election tree.
I expect an ‘exhaustion’ rate in excess of 50% of the votes of those who do so.
This means a significant difference to preference flows.
Only those tragics, such as myself who would doggedly fill in every single box in the Senate beach towel ballots, who preference because they know, or hope, that it matters will be in the ascendancy if, in coming years, more & more of those less than impressed by T1 & T2 understand the astonishing POWER of distributing their own preferences.
Be sure to tell your friends.