A gaffe-free, big-spending day livened up by the intervention of The Chaser ...

Bernard Keane, Crikey politics editor: A draw in the aftermath of the less-than-great debate that had the electorate too comatose to pay attention. Labor tried to get traction on the unfolding catastrophe of the Great Barrier Reef while Prime Minister Malcolm Turnbull tried to make amends with Penrith. Unusually, a gaffe-free day, the first in some time.

Simon Cowan, research manger at the Centre for Independent Studies: A day of crocodiles, gorillas and commentators (oh my) who thought it novel and clever to claim “the voters lost” the debate. It was good to get back to Q&A where the public could shift the debate to issues they really care about: what’s in it for them personally. Perhaps their near-exclusive focus on handouts explains why the Greens were on Q&A but not at the National Press Club. Unfortunately it seems the only thing becoming clearer as this election campaign drags on is what the people are against: the new hosts of Top Gear.

Tasneem Chopra, cross-cultural consultant, commentator, curator and activist: Neither Opposition Leader Bill Shorten nor PM Malcolm Turnbull emerged from Sunday’s debate looking very strong. The debate was pretty ho-hum and was less of a debate than a talk-fest. But overall, because the polls have the two parties neck and neck, with Labor’s vote increasing, I’d say things are pitching in Shorten’s favour. It’s apparent that the real Malcom has been lost in the context of his conservative party, while Bill is starting to sound more comfortable and less scripted.

Simon Breheny, director of policy at the Institute of Public Affairs: The election spendometre was ticking over yesterday. ALP commitments of $380 million dwarfed Coalition commitments of $4.6 million. It’s a good illustration of the kind of government we can expect — one way or another — after July 2. The ALP is hammering home its message with Bill Shorten making a series of anti-business statements during the course of the day. Not good for the economy, not good for thousands of mum and dad small business owners in marginal seats. A win for the Coalition.

Labor gets creative by announcing $1 billion in spending which was previously announced in 2015 by the Coalition and the government promises funds to combat childhood cancer. 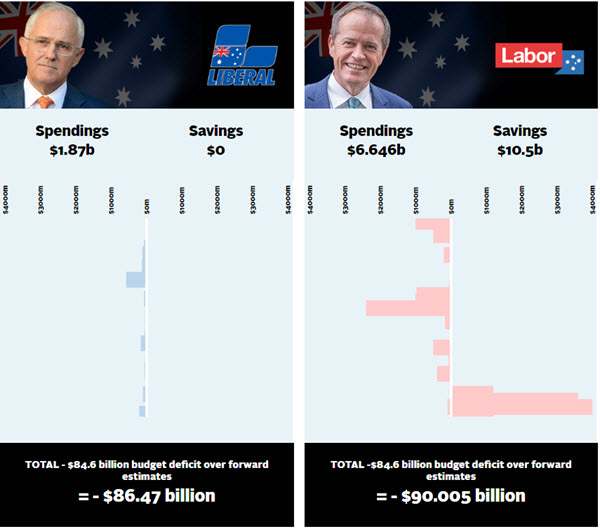 The Coalition: The PM will be campaigning in Sydney today and will announce funding towards combating childhood cancer through genome mapping technology. Turnbull has had a bit of a slow start to the day and has yet to make a media appearance. Perhaps he’s avoiding the Chaser team. Meanwhile, the deputy leader of the Liberal Party, Julie Bishop, had a tough time of it on morning radio this morning, as she struggled to answer Neil Mitchell’s questions on superannuation. After defending the government’s changes to super, saying that super should not be a tax-minimisation vehicle, she failed to give details on their transition to retirement scheme:

“Well Neil, this is obviously a gotcha moment, you want me to go through … it’s not my portfolio and …”

Bill Shorten: Bill Shorten is in sunny Cairns talking up Labor’s plan to boost tourism in Australia’s north with redirected funds. In the seat of Leichhardt, held by the Coalition’s Warren Entsch on a 5.8% margin, he started the day with a coffee with environment spokesman Mark Butler and candidate Sharryn Howes before giving a press conference:

“We’re about tourism, not just today or tomorrow. We’re about making sure that Australia has the infrastructure to grab the wave of Asian tourism.”

Shorten also confirmed Labor would extend the deficit levy, which was legislated to end in 2017, by a decade. Asked about Labor’s tax policy Shorten attacked the government’s cuts as irresponsible and said he would love to reduce marginal rates of taxation but “you can only make these promises when you can afford to pay it”.

The Greens: Richard Di Natale’s appearance on Q&A last night was particularly combative; Liberal MP Steve Ciobo called him “arrogant” and Labor’s Terri Butler said he wasn’t part of the debate because he couldn’t be PM. Moving on today, the Greens have announced that if they hold the balance of power of power after this election they will push for a royal commission with broader terms of reference than Labor have foreshadowed. The Greens would put the vertically integrated business model of the banking sector at the centre of an inquiry and investigate whether the retail arms of banks should be separated from investment and financial advice arms.

Bob Katter has called for a crocodile cull and championed crocodile shooting safaris following the death of a New South Wales woman, who was taken by a crocodile while swimming in waist-deep water in the Daintree National Park. Katter also attacked Liberal MP for Leichhart, Warren Entsch, who blamed “human stupidity” for the attack:

“I can’t believe that Warren Entsch is attacking the people over this. Defending crocodiles instead of people is stupid. And I’d like to get Mr Entsch to swear on the Bible that he hasn’t been in a river or creek in north Queensland. The crocs would take one look at him and they’d be licking their lips.”

Meanwhile, in South Australia the major parties are running scared for a different reason: the X factor, Nick Xenophon and his team. The latest polling shows NXT has a primary vote of 22%, five points behind Labor. Labor MP Nick Champion said on ABC Radio this morning that the election would be highly contested in South Australia. Minister for innovation Christopher Pyne agreed and argued Xenophon’s candidates were unknown quantities:

“A vote for NXT in the House of Representatives is a vote for instability, chaos and dysfunction and we’ve seen that movie before.” 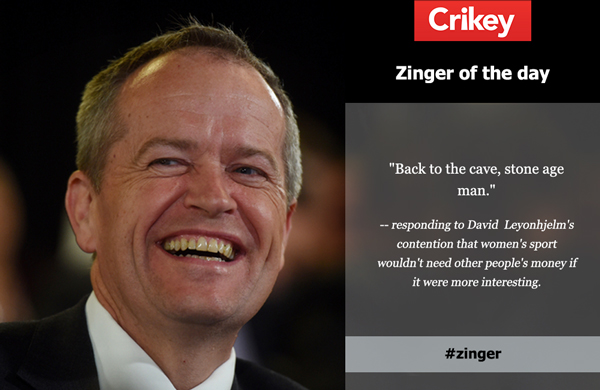 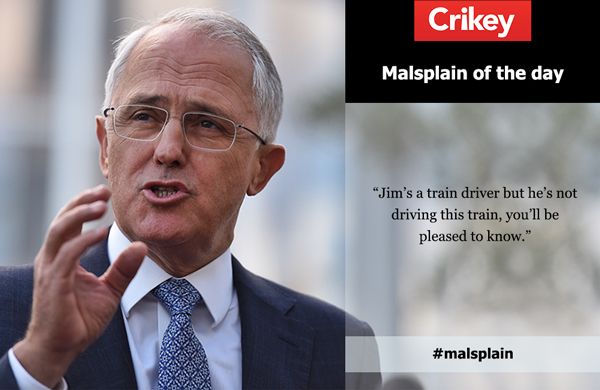 “This is the most anti-business policy I’ve ever seen federal Labor put to an election. And it’s not just the policy. It’s the language. The way it splits out the top end of town leaves business in no doubt that they are the enemy.”

Both Tony Burke and Bill Shorten attacked DeLacy over the comments; the Opposition Leader said that a Labor government would govern in the interest of all Australians. Meanwhile, in the seat of Hughes conservative Liberal MP Craig Kelly has been handing out fliers which state he is “looking forward to having the opportunity to contribute to a Coalition government under Tony Abbott”. He said this was a clerical error which has now been fixed.

We needed something to liven up this campaign. The monotonous, almost hypnotic repetition of “jobs and growth” was threatening to lure us into a deep sleep and Sunday’s debate was the most mind-numbing hour of television to hit the airwaves since Hey, Hey, It’s Saturday was last on. Happily, that something may have arrived: the Chaser boys are back. Chas Licciardello ambushed the PM at an appearance in western Sydney yesterday. Yelling “I trust you” Liccardello fell backwards into Turnbull’s feet in a perfect rendition of a trust fall. The only problem was, his trust was apparently misplaced; Turnbull didn’t catch him and he hit the ground with a thud. “You told me I could trust you,” he said. Craig Reucassel was also at it. He showed up at a Turnbull press conference brandishing a full-sized Tony Abbott cut-out … 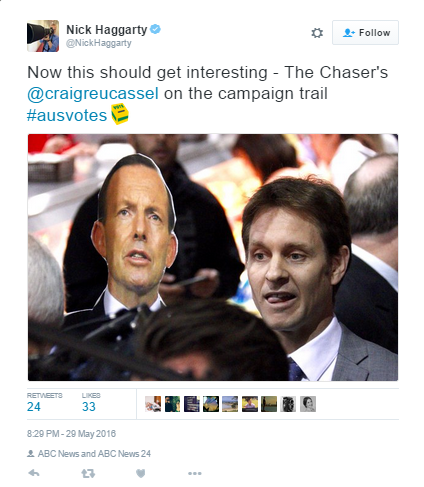 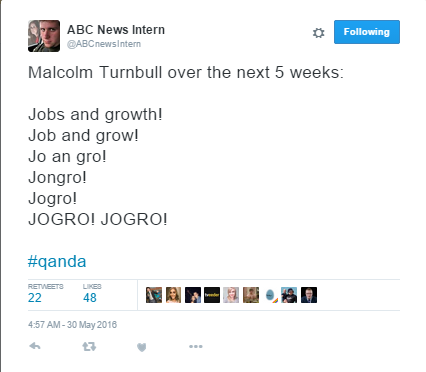 There were no real winners yesterday, as the campaign failed to pick up pace. Shorten has confirmed today that Labor will extend the deficit levy. And the biggest news of yesterday: the Chaser team are back.