Labor is leading in most national polls, yet most people still think the Coalition will romp home. What gives?

As the federal election campaign limps towards the halfway mark, an increasing disconnect is emerging between consensus views of the likely outcome and the state of play as measured by the polls.

Party strategists who feed their views on the electoral horse race to the press gallery have been in broad agreement that the Coalition remains in front where it needs to be, with Labor optimists at best talking of a trend that could yet bring them the lead in due course.

This cannot simply be dismissed as the view from the beltway, as it is shared by both punters and opinion poll respondents.

An Ipsos poll for the Fairfax papers last week found 57% expected the Coalition to win compared with just 20% for Labor, although Newspoll for The Australian curiously had it a lot closer, at 44% to 33%.

Betting agencies are offering odds that imply a roughly 75% likelihood of the Coalition being returned and have been doing so with little variation since at least the start of the campaign.

Despite all that, when yet another opinion poll rolled around on Friday evening, this time from ReachTEL courtesy of the Seven Network, the result was another grim headline for the government as Labor opened up a two-party lead of 52-48.

Aggregation of national polling finds Labor and the Coalition more or less tied on two-party preferred, suggesting a swing to Labor of between 3% and 4%.

Despite appearances, this trend wasn’t bucked by the ReachTEL poll, which had primary vote numbers comfortably in line with most other pollsters, but arrived at a striking two-party result through an implausibly heavy flow of preferences to Labor.

There is also a degree of disconnect within the polls themselves, which has been evident when they have zoomed in to local or state level.

A second ReachTEL poll for Seven, conducted concurrently with the national poll, found Labor making no headway at all into Liberal member Sarah Henderson’s 4% margin in the Victorian seat of Corangamite, which she gained from Labor in 2013.

The pollster has also recorded Labor falling short in the crucial Adelaide seat of Hindmarsh, and its comprehensive survey of the five electorates in Tasmania offered Labor no cause for confidence that it would win back any of the three seats it lost there in 2013.

One way to square the circle is to propose that Labor is indeed reeling in large numbers of voters who deserted it in 2013, as the national polling headlines indicate, but that those voters are located in the wrong places.

It certainly seems plausible that Labor could bounce back in traditionally safe Sydney seats that now have margins well inside single figures after successive poor results in 2010 and 2013, without doing much good to the overall seat tally.

Where Labor could really use some of that swing is in Queensland, home to 10 Coalition seats on margins of 7% or less.

Optimistic noises could be heard from the Labor camp not so long ago, particularly in relation to the state’s economically depressed outer regions.

However, as Fran Kelly noted on the ABC’s Insiders program yesterday, the government has been feeling increasingly bullish about Queensland as the campaign has progressed.

Opinion poll data provides a certain amount of evidence to justify this confidence, as illustrated by the chart below, which plots state-level trend measures of the swing to or against Labor since Malcolm Turnbull became prime minister. 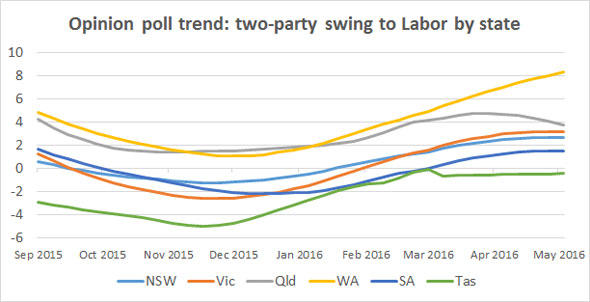 The overall picture is of a Turnbull honeymoon that peaked at the end of last year, followed a reversal that brought Labor to its present level of two-party parity in April, and a levelling off thereafter.

However, two states appear to have bucked the recent trend — one being Queensland, which has uniquely recorded movement in the Coalition’s favour over the past month, albeit the scale of the improvement remains within the margin of error.

The even more striking exception is Western Australia, which appears not to have received the memo about the end of Turnbull’s post-honeymoon slide.

At a time when the federal Coalition was steadying the ship elsewhere following a respectable reception for its budget, the state government in Western Australia negated the good work with a poorly received budget of its own, amid growing talk that Premier Colin Barnett wouldn’t make it as far as an election due next March.

So far as the federal election is concerned, Western Australia has two pieces of low-hanging fruit to offer Labor in the northern suburbs seat of Cowan and the new seat of Burt at the other end of town, plus another two opportunities further up the pendulum in Hasluck and Swan.

Present indications are that Labor could very well bag all four, and could even give ministers Christian Porter and Michael Keenan something to think about in their respective seats of Pearce and Stirling.

At this stage though, such gains look set to offer Labor only late evening consolation prizes on election night, after earlier counting establishes that the decisive seats on the eastern seaboard have remained beyond their grasp.

Do we know if former Coalition voters are favouring non-Labor parties – to avoid having to vote Labor?

Monas, on the House of Reps ballot paper, the voter must fill in every square. No matter how many “non-Labor parties” you give your early preferences to, in the end you have to vote for every single candidate on the ballot. The only way “former Coalition” voters can “avoid having to vote Labor” is to leave the Labor square empty and accept the consequences.

As I understand it the distribution of voters across electorates slightly favours the Coalition. Labor votes tend to be more clustered so some are wasted.

I think it’s time we moved to a multi-member proportional system in the House of Reps. So much money is pissed away on pork barreling in marginal seats under the current system, and there’s always the risk of a government being in power with a minority of the popular vote.

I suggest dividing the 150 Reps seats up into 30 five-seat electorates, along the lines of the Tasmanian lower house. Either that or adopt the NZ system of list vote MPs which top up the number of local MPs to reflect the actual vote.

That is based only on weird assumptions by Anthony Green who does his crystal ball gazing as if he is the messiah and the stupid media lap it all up as if it’s the gospels.

What beltway? Washington DC is encircled by I-495 and “inside the beltway” makes sense there, but why import it here? Is it just to show off your international cred in some way? You should come up with an alternative – there’s a Crikey competition here, perhaps – like “beneath the Brindabellas” or “in the watershed” (Burley Griffin) or “around the coathanger”.

Agreed – my pet hates are ‘step up to the plate’ (try ‘crease’), ‘ a different ball game’, ‘bathroom’ which is now ubiquitous, ‘guy’ esp when meaning women, ad nauseam.

‘This cannot simply be dismissed as the view from the beltway, a…”
Can Australian journalists ever be original and avoid the cultural cringe? Beltway is a Washington DC specific term

Especially since we already have a similar term invented a few years ago: the Triangle, denoting the insider views from Sydney-Melbourne-Canberra.

The takeaway message from the polls is that the public is doubly disillusioned by it all.