Journalists were caught in the crossfire as "anti-racists" and the United Patriots Front clashed in Melbourne. Plus other media tidbits of the day. 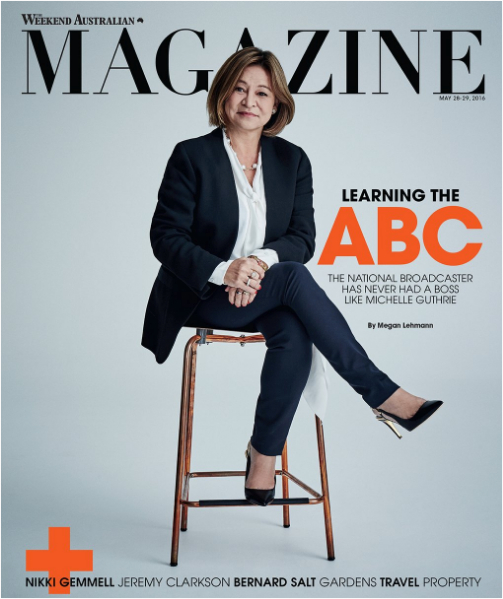 The choice of outlet will raise eyebrows among those who are made queasy by Guthrie’s career links to the Murdoch family, but ABC insiders say the new MD reckons the relationship with News Corp and the ABC is needlessly frosty. She’s keen to improve it — and this weekend’s feature was part of that.

The feature itself was short on controversy, but it did provide a window into Guthrie’s thinking. It doesn’t appear Guthrie is, so far anyway, expecting to knock heads together and drive massive change at the ABC. She talks of being a good listener, and on specific points of ABC controversy (such as perceived left-wing bias and concerns the managing director doesn’t have enough editorial input and oversight) says she thinks most things work pretty well. It also reveals her initial reluctance to take the job: she told recruiters she had no experience in journalism or public broadcasting, had a long career with News Corp and hadn’t lived in Australia for 13 years. Apparently those objections were “the very reasons she was hired”.

Despite her talk of “unleashing” ABC content on as many platforms as she can — Guthrie appears as much, if not more, of a digital evangelist as Mark Scott was — News Corp has yet to slam Guthrie for competing with the private sector with taxpayer funding. Though we suppose it’s only a matter of time … — Myriam Robin

Photographers pepper-sprayed? An anti-racism rally organised by a local Socialist Alliance-affiliated councillor turned violent over the weekend, after members of the far-right United Patriot’s Front turned up and a melee ensued.

On the Melbourne Antifa (anti-fascist) Facebook page though, attention is being drawn to the actions of the police. Several images of the rally (we don’t have permission to reproduce them, but you can see them here) appear to show police pepper-spraying a group of journalists.

Victoria Police spokesperson Paul Turner told Crikey that Victoria Police “has not received any complaints and in fact received a number of compliments from the media who were present with respect to their professionalism under trying circumstances in Coburg on the weekend.”

“Victoria Police are aware of images circulating social media and will investigate any complaint received from members of the media.”

Snapper Mathew Lynn, who was there taking photos for Fairfax (he’s in the photos in the black T-shirt), told us the photos were taken in the middle of a sudden escalation during which people from the two groups come together and “start beating the shit out of each other”. “Police were trying to subdue the situation, and we were caught in the middle. I wouldn’t say police were trying to target the media.” — Myriam Robin

Newspapers can survive, but without the journalism. After years of living in a fool’s paradise, all it took was the half-year results of the Daily Mail and General Trust (publishers of the Daily Mail and Mail on Sunday and the MailOnline news website) for reality to set in as to the widening black hole threatening the future of Britain’s newspaper sector. A column in The Guardian at the weekend by Roy Greenslade, respected media commentator and former Fleet Street editor, crystalises many of the facts and analysis about the growing uncertainty for print. His arguments are not new to newspaper owners, journalists, other employees and editors in Australia, Canada, Much of the US, France, Italy and New Zealand.

Headlined “Suddenly, national newspapers are heading for that print cliff fall”, the column argued that last week’s half-year profit report and outlook from Daily Mail and General Trust (DMGT) should be seen as a “landmark moment”. Greenslade pointed to the the profit warning from DMGT that newspaper profitability would fall in the next six months to around 10%, after being forecast at 13% in last November’s 2015-16 forecast. That was after a 29% slide in profits from the company’s papers. MailOnline still loses money, even though its ad revenues rose 24% in the six months to March 31.

But Greenslade pointed out that the DMGT warning came after The Telegraph cut jobs last week (around a dozen,with up to 80 to 90 more to go according to London rumours). The Guardian is losing money, cutting 350 jobs including 100 journalists. Trinity Mirror is seeing ad revenues drain as quickly as DMGT and has been hacking into jobs and costs on its national papers, such as The Mirror and its vast local and regional print empire (it bought control of a big regional publisher from DMGT last year).

“It is time to recognise that the whole UK newspaper industry is heading for a cliff fall, that tipping point when there is no hope of a reversal of fortune.

“It does not mean the immediate closure of papers because the lesson from regional owners is that it is possible to continue publication through cost-cutting. Papers can be produced with skeleton editorial staffs. Indeed, Richard Desmond has been doing that at the Daily and Sunday Express and Daily Star for several years.

“Space in newsprint papers can be filled. The end result is something that looks like a paper, but the content lacks any real value. It is not journalism.”

Daily newspaper sales have halved to around 6.5 million copies a day from 13 million a decade ago, but according to projections from the most recent breakdown on UK ad spending published in late April, newspapers’ share of UK ad spend will fall from near 30% in 2010 to around 10% in 2018. In fact by the end of 2017, outdoor advertising will be grabbing a bigger share of national ad spend than Britain’s daily newspapers. All this money is heading for mobile and Facebook, Twitter and other social media sites, followed by Google. — Glenn Dyer

Fairfax backing out of NZ. APN News and Media will be the dominant shareholder in a company to control merged New Zealand print, radio and online assets, with partner Fairfax Media looking like it is preparing to exit the country.

In the event shareholder approval is gained, it is currently proposed that APN’s NZME will acquire Fairfax’s NZ assets (or shares) from parent company Fairfax Media for a mix of new shares in NZME and cash. Fairfax Media’s shareholding in the merged entity is expected to be less than 50%, according to public details in the submission from the two companies to the NZ Commerce Commission.

The submission was made to the Commerce Commission last week by Wilson and Horton Limited (trading as NZME) and Fairfax NZ Limited and seeks authorisation to merge their Kiwi media operations.

As Fairfax sells down, News Corp, with its 14.9% in APN, will be increasingly dominant. That’s why the level of retained interest in the proposed new joint venture company by APN will be watched closely on both sides of the Tasman.

Front page of the day. “Protesters” looking for trouble … 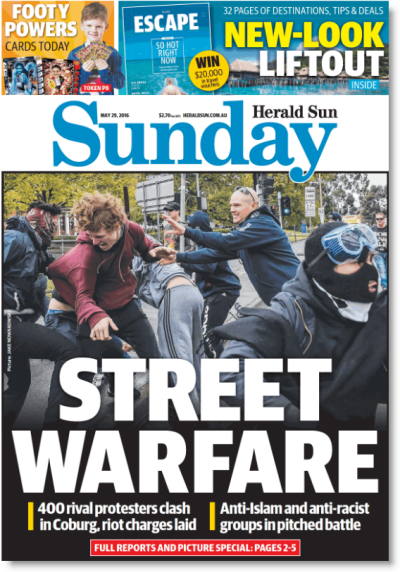 It’ll be interesting to see where Guthrie has buried that hatchet.

I spent an enjoyable time Sunday watching self-proclaimed ‘radical aggressive activists’ who said they were (among many other absurdities) taking over Macquarie Street in “defiance’ of the ‘fascist apparatus’.
As 4.00 p.m. neared, when gentle young Police Officers let the crowd know the time, the Angry Protesters’ leaders took them off the street like shepherds moving gentle baa lambs.
Melbourne would of course be different, as it has long been the home of nutty extremists of the Left and Right.