Who’s running Sydney Theatre? Now that Brit Jonathan Church has fled Australia, unable to come to terms on seeing out his job as artistic boss of Australia’s largest theatre troupe, it will be all hands on deck at Sydney Theatre Company’s wharf HQ. The Australian reported today that “about 60%” of the 2017 program — due to be launched in September — was in place before Church’s departure. Though Ms Tips had heard it was quite a bit less than that with less than three months to go.

With no replacement for Church due any time soon, a committee will be in charge of pulling together however many holes are left in the all-important program. That’s likely to be led by Rachael Azzopardi, the company’s director of programming and artistic operations, with the help of literary manager Polly Rowe and, probably, fine resident directors Kip Williams and Sarah Goodes. If you have a stage-ready play, now might be the time to knock on their door …

Hot Albo strikes again. Labor MPs love using old photos of themselves in their youth to show how they are hip with the yoof. Now a tipster has shared this pamphlet from Labor’s Anthony Albanese, wherein he uses a 20-year-old photo to promote his Medicare policies … 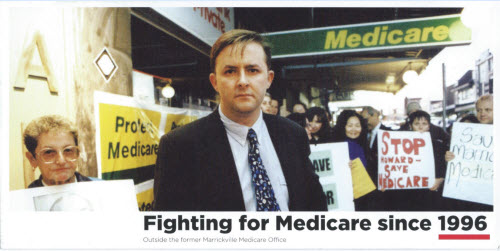 Speaking of courting the youth vote, Albanese’s colleague Sam Dastyari has returned to his love of the halal snack pack, with this post in Facebook group Halal Snack Pack Appreciation Society, rating both food and Labor’s policies: 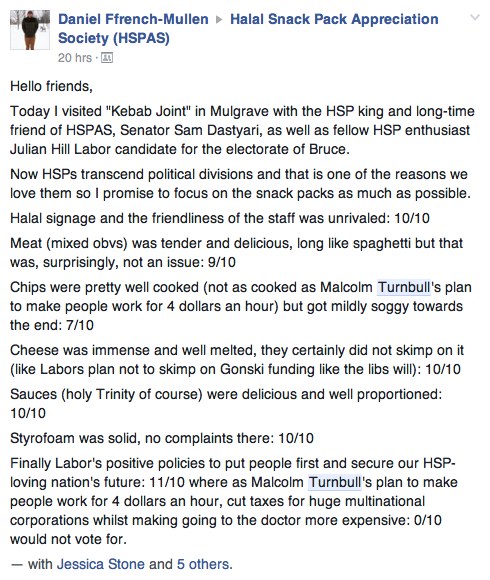 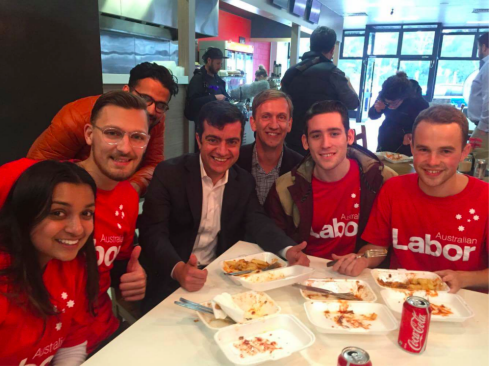 Dastyari’s fondness for the HSPs is not a new thing; he has previously spoken in parliament on the topic. The Greens are also trying to seek out voters in their natural habitat: before the voting roles closed last week Higgins candidate Jason Ball and supporters sought out revellers on Chapel Street to make sure they were enrolled to vote … 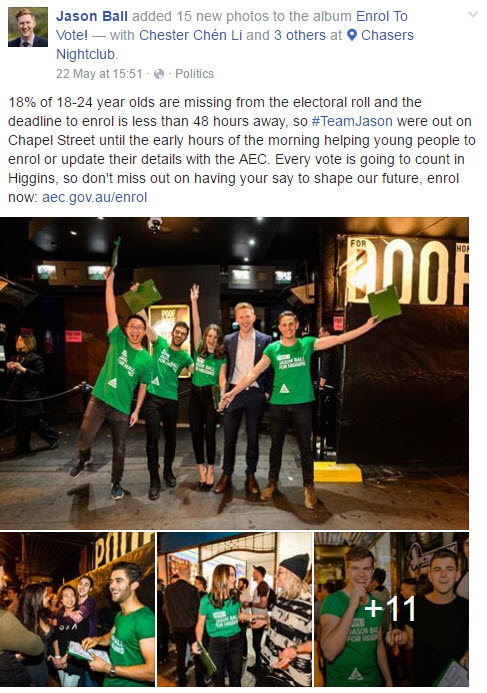 Turnbull’s clanger on UK tax. In a rare outbreak of actual policy discussion last night in the leaders’ debate, Prime Minister Malcolm Turnbull cited the United Kingdom as an example of a country that had cut company tax and generated growth while defending his $48 billion company tax cut. Except the UK demonstrates exactly the opposite — as Crikey’s Bernard Keane and Glenn Dyer showed in March, the UK’s economic growth record compares poorly to ours despite Australia having a significantly higher company tax rate.

Especially damningly, both wages growth and productivity have been much worse in the UK — in fact, labour productivity has gone backwards. But the UK’s company tax cut has helped in one area — the budget deficit. The UK Tories make our Liberals look like fiscal disciplinarians: the budget deficit in 2015 was 4.4% of GDP, compared to 2.4% of GDP here. Thank goodness the government’s funding cuts killed of the ABC Fact Check unit.

Lib candidates’ history. Liberal candidate for the marginal seat of McEwen Chris Jermyn has had a weekend to forget. While most voters in the suburban Melbourne seat would never have heard of Rob Mitchell’s challenger before Saturday, they definitely do now, after Jermyn failed to articulate just what his party’s Medicare policy is. Jermyn showed up to a Bill Shorten press conference at a Sunbury health centre, but when asked about his own party’s Medicare plans he had this to say:

“Look clearly my position is that of the federal government. The government’s policy is very clear. Nonetheless I think we’ve got the leader arriving now, so I’d like to have a listen to what he’s got to say.”

Labor holds McEwen by just .2%, but we think there’s a tiny sigh of relief there now. Jermyn’s history with the Young Liberals has now come to light, with his attendance at a 2005 conference at which students chanted “we’re racist, we’re sexist, we’re homophobic”. Jermyn also served as the mature-age representative at the University of Melbourne’s Student Union in 2013. His first act in a meeting in July was to second a motion from a fellow Young Liberal that the student union congratulate the Duke and Duchess of Cambridge on the birth of Prince George. The motion was lost. And this morning Scott Morrison told Ray Hadley there were “no dills” in the Liberal Party.