Crikey Campaign Scorecard: the gaffe that won the weekend

If two leaders had a debate and nobody cared, did it really happen?

Bernard Keane, Crikey politics editor: Step forward Chris Jermyn, the Jaymes Diaz of 2016, guaranteeing a win for Labor with his sublimely awful performance on the weekend. Not knowing your party’s policy on a key election issue is one thing, but berating the media in a tone that suggested a deep personal outrage that someone had the effrontery to actually ask was the killer. At least Diaz had the guts to go on The Chaser and take the mickey out of himself afterwards. On the minor issue of actual policy, the GP campaign against the government (effectively) on Medicare rebates is going to hurt. The Coalition might yet regret treating health as an inexhaustible source of big budget savings.

Dr John Hewson, former Liberal Party leader: Both leaders were overheard praying over the weekend: “Please God, no more Barnabys, no more Feeneys!” The so called “debate” is now simply an opportunity to ignore the questions, and just attempt to direct focus group-driven messages straight to the viewer. But, the wedging has begun — Malcolm Turnbull attempting to wedge Bill Shorten on asylum seekers, emphasising ALP record, weakness and division; Shorten attempting to wedge Turnbull over climate change, searching for the “Old Malcolm”, inadequacy of Direct Action, silence on renewables. Both acutely sensitive and vulnerable. Let’s hope it flushes out policy detail …

Dr Zareh Ghazarian, political scientist at Monash University, author and media commentator: While both major party leaders did an effective job at the debate, the winner over the weekend was Pauline Hanson who built momentum towards winning a Senate seat in Queensland. With polls as they are, she has a right to feel “quietly confident” of returning to Parliament 20 years after she made her famous inaugural speech.

Bill Shorten was the bigger spender today, with money for the environment, roads, healthcare and women’s sport. Malcolm Turnbull has turned his focus to STEM education funding … 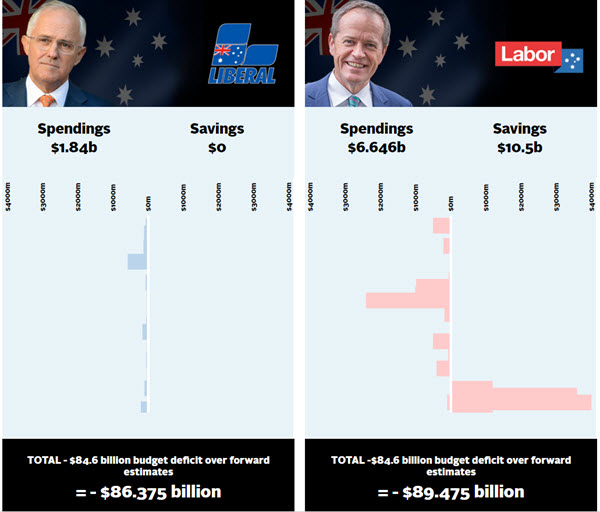 Malcolm Turnbull: The Prime Minister has hit the key battleground of Western Sydney where the Coalition is trying to protect some of the seats it took in the 2013 election. Today he hit up a local school in the marginal seat of Lindsay, currently held by Fiona “sex appeal” Scott, to announce funding for the teaching of science, technology, engineering and maths (STEM).

Bill Shorten: The opposition leader is once again in sunny Queensland where he spent the morning in Cairns to unveil Labor’s policy to protect the Great Barrier Reef and the 70,000 jobs it supports. He was joined by environment shadow Mark Butler and Labor’s candidate for Leichhardt, Sharryn Howes, to make the big announcement on Green Island.

The Greens: Greens MP Adam Bandt has demanded the government do more to protect the arts industry, saying that $270 million of funding is needed to reverse the cuts from George Brandis’ time as Arts Minister. Meanwhile, Greens leader Richard Di Natale is preparing for his Q&A appearance with Nick Xenophon and Jacqui Lambie tonight.

Mack’s back on the campaign trail and he’s shown us all that he’s in for the long haul. The canine legend, who is also Tony Windsor’s campaign adviser, helps us keep track of where we are in this long campaign … 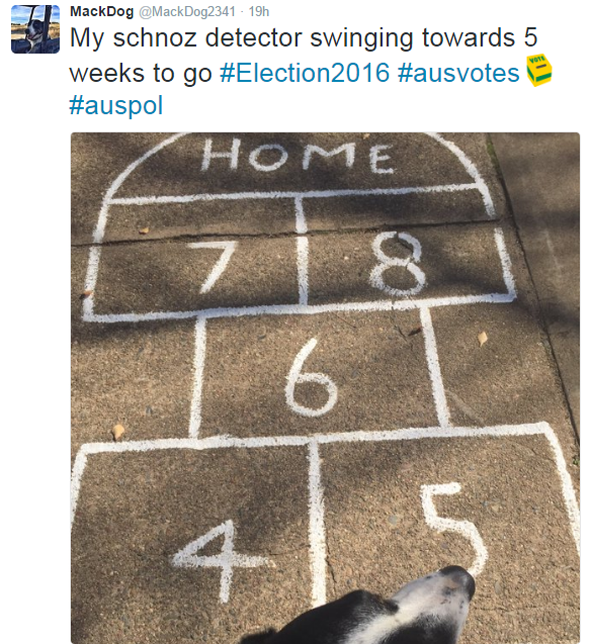 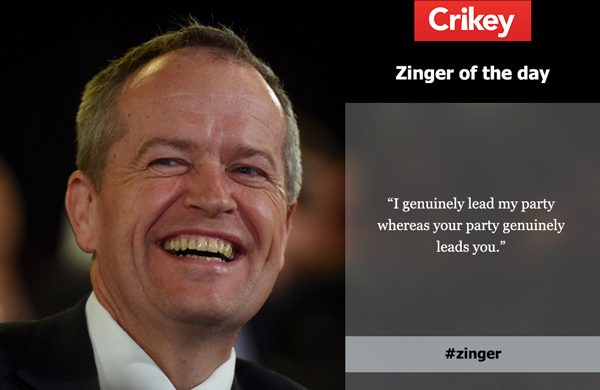 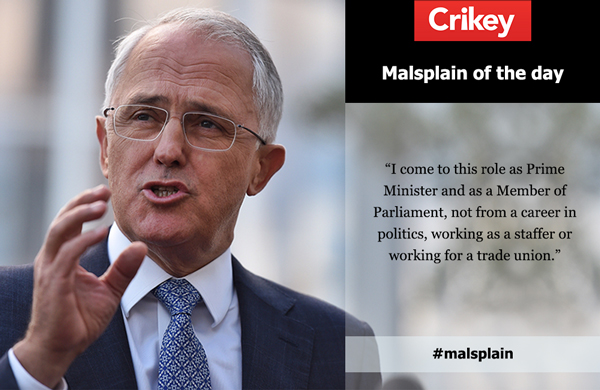 MAD AS A KATTER

Bob Katter is, to put it mildly, an unusual man. The member for Kennedy quit the National Party in 20o1 to become an independent before founding his own party, Katter’s Australian Party, in 2011. He’s mostly known for his croaky voice, silver hair, cowboy hat and belief that there aren’t any gay people living in North Queensland. Now he’s decided to pose for a photo with those charming fellows from the United Patriots Front, a far-right, nationalist, anti-immigration group … 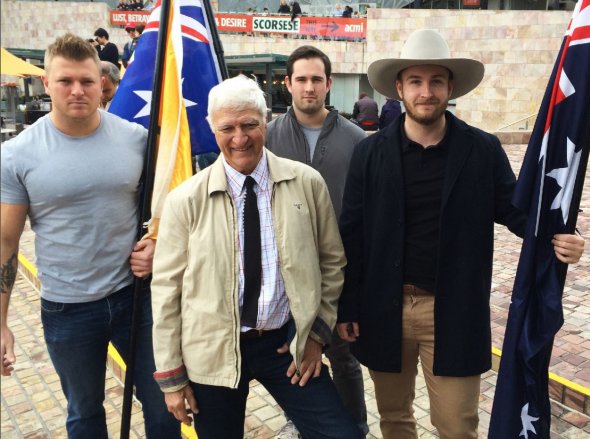 The delightful chap on the left is Blair Cottrell, the man who recently called for pictures of Hitler to be in every classroom in Australia.

Liberal candidate for the marginal Victorian seat of McEwen, Chris Jermyn, planned a bold ambush of Bill Shorten while the Opposition Leader was speaking at a Sunbury medical clinic. The only problem was Jermyn didn’t seem to know what his own party’s Medicare policies were. After stumbling through some reporters’ questions, his ambush amounted to shaking Shorten’s hand before sulkily packing up his signs and leaving. If you’re into awkward politician fails then this video should give you your fill. Oh, and if you missed it, this is the same Jermyn who made news over the weekend after video footage emerged of him attending a conference in 2005 where a group of Young Liberals chanted “we’re racist, we’re sexist, we’re homophobic”.

Tony Abbott is facing a challenge from an Australian Idol, or at least a man who used to host it. TV presenter James Mathison will square off against the recently deposed PM, and whether you love or hate his zany personality and intense eyes, you can’t deny he got one thing right:

“The trouble is with this two-party system, all you’ve got to do is be less shit than the other guy.”

The second leaders’ debate took place last night, and while nobody had anything particularly kind to say about it, radio host Neil Mitchell found a way to sum it up quite succinctly …

Turnbull is in Western Sydney where he’s using education to try and sure up support in a marginal seat. Shorten heads back to Queensland to bolster Labor’s environmental credentials by promising funding for the Great Barrier Reef. The Greens have put the arts at the top of their agenda.