Nauru gets with the times (sorta) ... get fit and help the Coalition ... watch out for the fine print ...

‘Progressive leadership’ on Nauru? The government of Nauru has announced it’s decriminalising homosexuality and suicide, after a Iranian refugee was convicted with attempting suicide in April. A media release from the Nauruan government says it “continues to show progressive leadership and in keeping with its legislative agenda, has passed a new number of laws including the decriminalising of homosexuality and suicide”. The release addresses a number of issues, saying:

“… [the Crimes Act 2016] updates criminal penalties to appropriately apply to Nauru’s current domestic circumstances and removes references to punishments that are inconsistent with international human rights standards — for example, penalties such as the death penalty, imprisonment with hard labour, and solitary confinement have been removed, while the penalties for sexual offences, particularly relating to children, have been increased; …”

Abortion remains a criminal offence “where not carried out as part of a ‘lawful medical procedure'”, while rape has been given “a broader definition and now applicable to married and de facto couples”. The changes also include child marriage, pornography and “unlawful assembly and rioting”.

“Since September last year, Jonathan has led the development of an exciting season for 2017. Over these nine months, he has been balancing his time in Sydney with his ongoing commitments in the UK and elsewhere, and it has become apparent that the combined workload and travel will be unsustainable.”

In the hours since the announcement, Australia’s theatre scene has been awash with rumours about what really went down. Critic and playwright Alison Croggan tweeted that the departure was “management initiated” and that he had been treated “very shabbily”. Today she says the rumour is that Church “couldn’t get his program past the board”. A Crikey tipster also takes issue with STC’s statement, saying Church “stepped down” and points to friction with the board:

“He was making plans to move his family to Sydney, had found a home on the North Shore and had already established good connections into the Australian artistic community. Rumours are that key members of the management team found they weren’t that keen to have an AD who actually wanted to run the show, and who questioned the number of administrative staff. The real question is why, after an 18-month search and a well-received appointment of a successful and respected arts leader, the board of directors allowed insecure administrators to persuade them to take such an extraordinary decision, one certain to damage the company’s international reputation?”

Daily Review‘s Ben Neutze writes that part of the issue was the STC board’s agreement with Church that he could retain his commitments to his own theatre company in the UK:

“The STC board was clearly attracted to Church’s track record in the UK, his international connections and his skills in fundraising for major projects. Those skills would have been particularly useful to STC in coming years as all arts companies are facing more precarious financial times.

“Presumably the Board decided it would be worth compromising on Church’s time spent in Australia focused on the company to have such an international heavyweight in the role. Hopefully they’ll refuse to make that compromise with whoever they choose next.”

So what’s the real story here? You can drop us a line (anonymously) if you know more …

Heavying multinationals in Dobell. The voters in the marginal seat of Dobell received this brochure from Liberal MP Karen McNamara, with a focus on tax policies announced in the budget …

Weight watchers on the campaign trail. Speaking about letterboxing, this is how the Liberals are spruiking for volunteers to get their fliers in front of voters’ faces in the bellweather seat of Eden-Monaro: hand out fliers and get some exercise at the same time. The offer of “help your wasitline and your country” is hard to refuse … 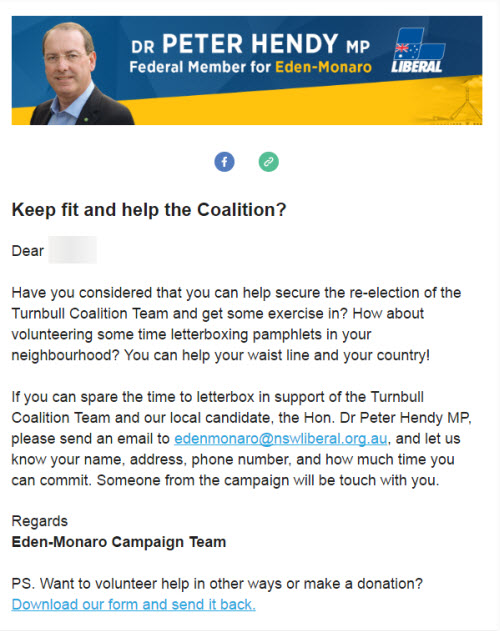 Norwegians reading fine print. Sometimes public service can also be an art form. The Norwegian Consumer Council read out the terms and conditions of downloadable apps in a 32-hour webcast this week to point out that people don’t always know what they are agreeing to, reports AAP:

“‘We got the idea from slow TV,’ [Finn Myrstad] told The Associated Press, referring to broadcasts in Norway of, for instance, five straight hours of knitting, a fire burning itself out and live, minute-by-minute salmon fishing.

“Mr. Myrstad said that the team decided to read and analyze the small print of selected apps over six months, and that it discovered that many of them broke the law.

“‘We wanted to expose the absurdity of the terms and conditions of when you download an app,’ he said. ‘You usually don’t read them because they’re either too long or complicated, and many of them breach consumer law and data protection laws.'”

Progressive leadership on Nauru . . . . Who would have thought?

Section (1) Crimes Act 2016: Suicide is no longer an offence and is considered more a mental health issue rather than a criminal law issue.

Is this now an issue of biter bit? In trying to evade fallout from suicidal refugees driven to a final act of defiance; the Nauruan Govt has opened a door to legalised euthanasia?

One should always remember, Graybul, that although the Crikey Commissariat may not be suffering from heightened intellectual abilities, it does have a severe case of emotively blinkered syndrome.
Additionally as can be seen from this article, it clearly doesn’t understand that in standard English it is “an Iranian” and not “a Iranian.”
If only that were the Crikey Commissariat’s only problem, the more discerning subscribers could receive better value for their money.