Media briefs: it’s official … hungry Apple … what next for Gawker?

Kerry Stokes to the rescue! And other media tidbits of the day.

Stokes to the rescue! Seven West Media has finally broken cover and confirmed that is in talks with News Corp to acquire the weakly performing Sunday Times and the associated Perth Now website for an as yet undisclosed amount. Seven West said any final deal depends on approval from the competition regulator, the ACCC.

This is a Perth deal, designed to bolster Seven’s dominance of the media in Western Australia and especially Perth, where Seven West’s biggest shareholder, Kerry Stokes, is king. Of Seven West’s three areas of the media — TV, newspapers and magazines — the paper (The West Australian) is losing sales and ad revenues by the quarter, but that’s not as bad as the weakness and chasm opening up under Pacific magazines. It is also telling that Seven is not investing in its best business, the Seven TV network and associated production houses, here, in the UK and US, or in its Presto streaming joint venture with Foxtel.

While Seven and its Perth newspaper operation will benefit from any purchase of the Sunday Times and Perth Now, it is a short-term deal designed to strengthen links with News Corp and the Murdoch clan. Seven is doing News and the Murdochs a big favour with this deal, removing the possibility that News would be forced to shut the Sunday Times and Perth Now in the not too distant future and cop any blowback. Kerry Stokes obviously has other deals with News in his sights; perhaps something to do with Fox Sports and or Foxtel? — Glenn Dyer

‘Tis the season for acquisitions. The Financial Times overnight reported that a senior executive from Apple raised a possible bid in talks with Time Warner last December about content deals. It’s not the first time Time Warner has been in the sights of a possible bidder. Rupert Murdoch’s 21st Century Fox tried and abandoned an US$85 billion bid in 2014, but the Apple approach is the first from the “new” digital media sector.

Clearly, the approach went nowhere, but it tells us how desperate Apple is to spend some of its US$200 billion of cash on new growth areas as sales of its key products, led by the iPhone, slow. Earlier this month Apple invested US$1 billion in China’s answer to Uber, a company called Didi Chuxing. It is also reported to have started commissioning video content for its music-streaming business. Time Warner though controls a fleet of cable channels, led by HBO and CNN, it owns Warner film and TV studios and makes hundreds of hours of content a year for the film and TV sectors, making it a prime target for the likes of Apple (or Amazon).

Time Warner would only cost Apple US$60 to US$70 billion (much cheaper than the Murdoch bid would have cost Fox two years ago), while a bid around US$50 billion or a bit more would give it Netflix – both could be easily paid for from its US cash pile, with some borrowings, without touching the billions it has offshore. Apple has already committed to higher dividend and sharebuy backs to appease restive shareholders. — Glenn Dyer

Gawking at Gawker. As surprising as the Time Warner news was, there was a real shock at reports that emerged later in the day that Gawker had appointed advisers to help it examine approaches from a number of possible buyers. Gawker hit the news earlier this week when media reports suggested that Peter Thiel, the Silicon Valley investor (PayPal, Facebook) was bankrolling  lawsuits against Gawker. The most prominent of these actions is the one from former pro wrestler, Hulk Hogan (Terry Bollea) who sued Gawker after it published online a sex tape that he featured in. A court awarded Hogan US$140 million in damages. Thiel subsequently confirmed the reports. Gawker is appealing the award and this week failed to get the decision set aside after Thiel’s financing activities became known. According to various media reports, Gawker had reportedly received offers of up to US$350 million before the Hogan damages award.

Probably the most credible of their approaches has come from Penske Media Corporation, which owns a group of small print/digital properties including Variety, Women’s Wear Daily and deadline.com. Univision, America’s dominant Spanish TV network is also reported to be interested. Gawker also owns the the Gizmodo, Jezebel and Deadspin websites. A successful appeal against the Hogan decision that either cuts the size of the damages bill, or eliminates it completely will lift the value of Gawker and the possibility of a takeover. — Glenn Dyer

Daily fail. Daily Mail & General Trust (DMGT), owners of the right-wing Daily Mail and Mail On Sunday, couldn’t avoid the slide in print ad revenues that continues to swamp Britain’s print media. With the company about to change CEO’s next week, the half-year results underline the pressure the new boss, digital consultant Paul Zwillenberg, will be under to halt the rot or look at splitting the company. The weak result, especially from print, had the shares fall nearly 11% overnight as the company cut its profit forecast for the papers for the rest of the year.

While the rest of the company performed to expectations in the half year, the print and online news businesses went backwards, and will continue to do so over the rest of 2015-16 with DMGT now forecasting a drop in revenue and profits for the full year. Overall, DMGT reported half year revenue up 3% to 950 million pounds. Profit before tax fell 11% to 129 million pounds, thanks to the weakness in DMG Media. But the continuing tough market for newspaper advertising led DMGT to warn investors that it will miss its stated 13% operating margin target for DMG Media this financial year, it now expects it to fall to 10%. — Glenn Dyer 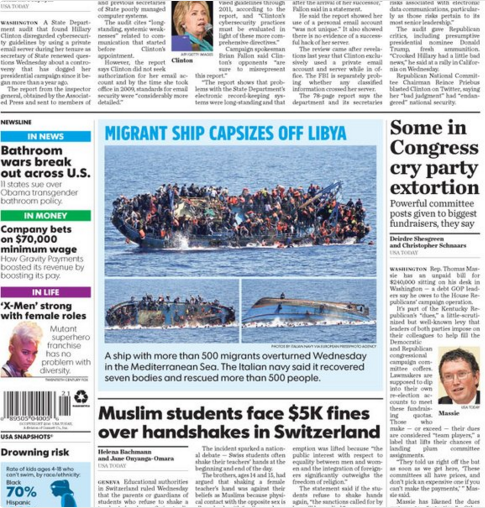