Both Bill and Malcolm have been talking up their plans for indigenous Australia.

Bernard Keane, Crikey politics editor: Another Coalition stumble, from Barnaby Joyce, had Prime Minister Malcolm Turnbull scrambling to not merely clean up the mess for his campaign but do some diplomatic fancy footwork to reassure Indonesia, offended by his cretin of a deputy. Labor spent the day cleaning up the mess created by another idiot, David Feeney. This is Australian politics, 2016. A draw.

Margo Kingston, journalist, author and commentator: There were a lot of messes yesterday. There was a David Feeney mess and there was a Barnaby Joyce mess. But the story of the day was that budget repair is now back on the agenda. For whatever reason, Labor has had to drop two key promises, their support for a school kids bonus and their opposition to changes to the age pension assets test. This has brought the budget bottom line front and centre. Today was a win for the Coalition. Joyce’s comments won’t harm the government; if anything, by bringing the attention back on to asylum seekers, they might have helped their cause. Labor can win this election; they’re strong on broadband, on health and on education, but they’ll have to convince the electorate that they can deliver a better budget bottom line. And to do that they’ll have to have some more savings measures up their sleeves.

Dennis Glover, veteran Labor speechwriter and fellow of Per Capita think tank: Three weeks into this campaign and there has yet to be a major speech. To my generation, that seems sort of strange, but I guess to anyone under 30 it seems normal. Computer-generated email seems to be enough. We appear to have entered “take out the trash” time, with the party leaders using the last few days to unload the bad news (that Barnaby Joyce is a fool and Nova Peris deserves some happiness) while no one is paying attention, and to mentally relax before the serious work gets underway. David Feeney and Mathias Cormann should submit their nomination forms and head to a beach resort for a week to try to remember the reasons why they ever wanted to be politicians in the first place. There will still be plenty of time for them to campaign after they get back!

Labor has backed down on a number of previous promises, and plugged up their black hole to the tune of $9.3 billion. Both parties make promises to boost indigenous jobs … 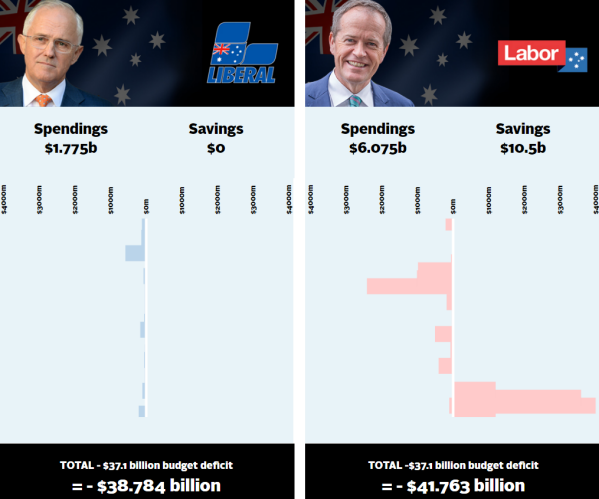 Malcolm Turnbull: The PM, on Sorry Day, yesterday made a statement calling for reconciliation: “With optimism and hope, made real by hard work and commitment, we walk together in healing and in reconciliation.” He will continue to focus on indigenous affairs today, discussing the Coalition’s plan to boost the indigenous business sector in Brisbane. Turnbull spoke at the Gilimbaa indigenous digital creative agency this morning, which was surrounded by police and protesters. The protesters were speaking out against the government’s stance on penalty rates and chanting: “Malcolm Turnbull: rich and rude, we don’t like your attitude.” Turnbull, speaking alongside Minister for Indigenous Affairs Nigel Scullion, talked up the government’s record on indigenous enterprise, saying they had exceeded their target that 3% of domestic contracts go to indigenous businesses, and that $150 million worth of contracts from the federal government had gone to indigenous enterprises under the Coalition. 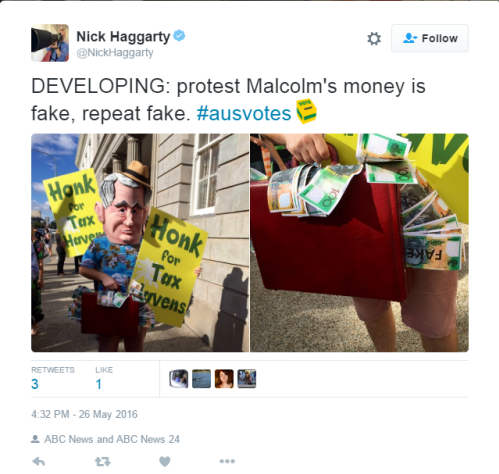 Bill Shorten: The Labor leader is in the Northern Territory today where he will also be focusing on indigenous affairs. He started the day in Darwin where he discussed Labor’s plan to boost jobs and protect the environment in remote areas through the Indigenous Ranger Program. “Indigenous rangers are role models in their communities, with the program providing a pathway to work and a profession that has been shown to improve indigenous health, incomes, crime rates and incarceration rates,” he said. The Opposition Leader defended Labor’s backdown on the school kids bonus:

Asked three times about when the decision was made not to bring back the school kids bonus, he failed to give an answer. Shorten will later be travelling to Maningrida in Arnhem Land.

Going, going, but not yet gone. Clive Palmer had some extraordinary things to say on last night’s Lateline. Once the Liberal Party’s biggest donor, he attacked the party over their donation procedures:

“It’s a whole murky world, the Liberal party. They don’t publish accounts, they have no audited accounts, the accounts are not made available to members of the executive or senior donors to the party.”

He also described a physical altercation with Tony Abbott:

“As I tried to leave the room he blocked my [exit]. Gesturing with his hands in what I would say was an aggressive manner he asked me to sit down and sort this out … I then reminded him that he was quite a capable boxing champion as a bantamweight when he was at university but that I was a heavyweight and he should step aside; and he did.”

And Ricky Muir perhaps captured the mood of the electorate best this morning on Radio National:

“People are saying ‘we’re over the campaign already. We’re sick of hearing jobs and growth 18 times a day.”

Shorten crept ahead on TV and on social media, but Turnbull still got the most mentions … 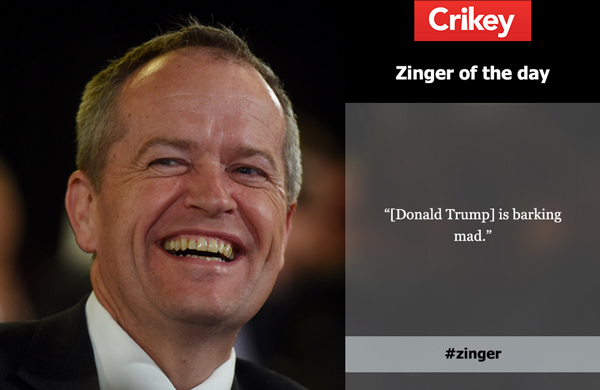 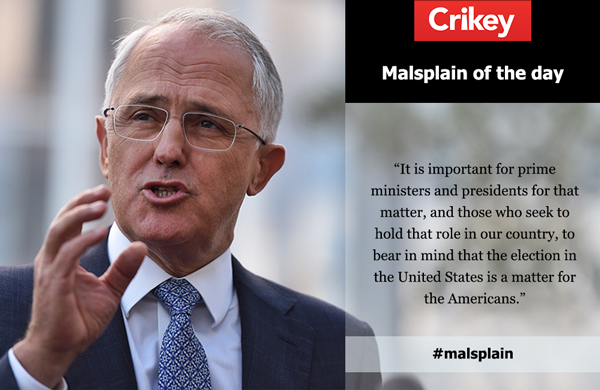 Tony Abbott’s been campaigning in Western Australia — which is a long way away from his electorate Warringah, where both the Labor and the Nick Xenophon Team candidates are stepping up their campaigns against the former PM. Labor candidate Andrew Woodward has launched a fundraising website, stoptonyabbott.com, and NXT candidate Marie Rowland is running under the slogan “swap the votes“. 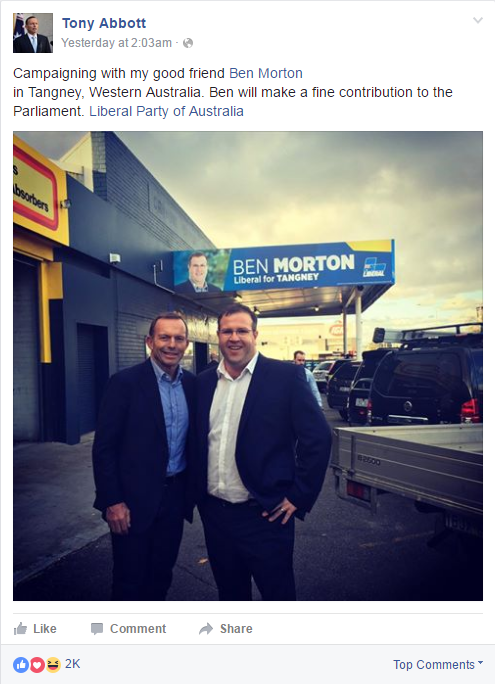 Tony Clark took a ride on the Bill Bus yesterday and it made for a fun video and a new slogan: “Melbourne Kebabs are better.” The video is well worth a look, as is Sam Dastyari’s Reservoir Dogs pastiche from a couple of weeks ago … 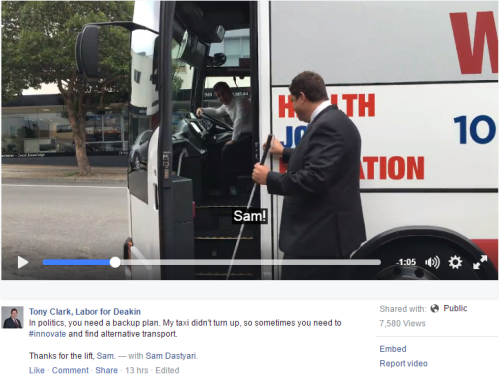 We missed this one from a few days ago; it’s too good not to include … 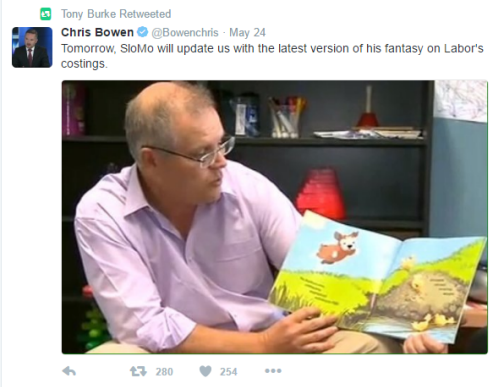 Labor chips away at that black hole with some large savings announcements. Both parties focus on indigenous affairs.

I don’t think the Cash Tracker makes sense, shouldn’t labor’s budget deficit be ~32.7 billion and not 41.763? As their savings are higher than their spendings.

Hi there – most of Labor’s savings don’t affect the deficit, as noted below. Also, they start from a position of deficit – not zero. There are things they are announcing as “savings” because they are not going ahead with something the government plans to do, but because they are not spending money that hasn’t been added to the government side (stuff announced before the election), it doesn’t add up to the final balance.

Brough’s Intervention worked so well ….
And which “presidents (…. who seek to hold that roll in our country)” was Turnbull referring too

I’m just fascinated by the thought that some LP candidates allow the Abbotrocity with cooee of their bailiwicks.
Almost as if they think him an asset in the electorate.