No toast for you ... all aboard the fake train ... Telstra's data management problem ...

Pity the misogynists. One seat that Ms Tips is taking a particular interest in is the seat of Higgins, currently held by Assistant Treasurer Kelly O’Dwyer. The blue-ribbon Liberal electorate covers suburbs like South Yarra and Malvern in Melbourne’s inner south-east. O’Dwyer is challenged by Labor’s Carl Katter and the Greens’ Jason Ball, who has a high public profile after his advocacy for gay football players and diversity in the AFL. The seat also covers the state seat of Prahran, a Liberal-held seat that was won by the Greens in the 2014 election. We received this dispatch from a tipster:

“Constituent in Higgins was the subject last night of a detailed phone poll by Q and A Research, focusing very heavily on distribution of preferences. Was this commissioned by the Libs, worried that Ms O’Dwyer may not crack the magic 50% plus 1 in primary votes? On a related point, with current declared candidates for Higgins being two gay men and two women, what is a homophobic, misogynist man supposed to do?”

The preference deals in the seat of former treasurer Peter Costello are ones to watch. And of course, the real victims here are the homophobes and the misogynists, but we’re sure they’ll get through it.

NO TOASTERS. The ABC in Melbourne is in the middle of moving from its old studios to schmick new studios and offices at the existing Southbank site, but we hear that it has not been without issues. Last night, ABC staff received an email telling them that toasters were banned at the new premises: 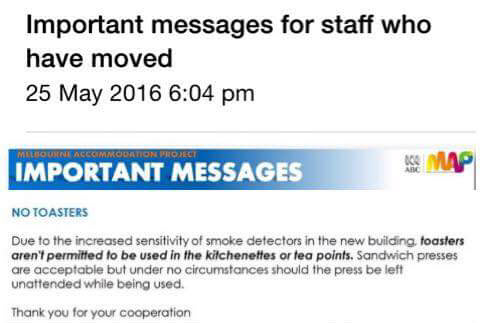 Staff are allowed to use a sandwich press, but they must supervise their toasties while the cheese melts. The news hasn’t been received well by some staff:

“Staff at ABC Melbourne have been told that they can’t have toasters in the new kitchens of their new building due to the ‘sensitivity’ of smoke detectors. How ridiculous? No toasters? – there’s likely an increased concern someone might set the sprinklers off after they went off in the existing building a few weeks back after someone knocked a sprinkler head off and caused severe flooding of two radio studios (and damage to studio 38 where news breakfast is filmed) … But seriously, no toasters?!?!”

Ms Tips understands that the national broadcaster’s undeniable bias against warm bread is not new, but that some staff had been adept at hiding such allegiances/appliances until now. The process of moving has, of course, elicited grumbles, including from staff that now find their offices and studios on different levels.

Brought to you by Victorian Parliament. It’s not unusual for MPs to use sponsored social media posts to reach voters, but for a parliamentary account to promote a political act caught the eye of one tipster: 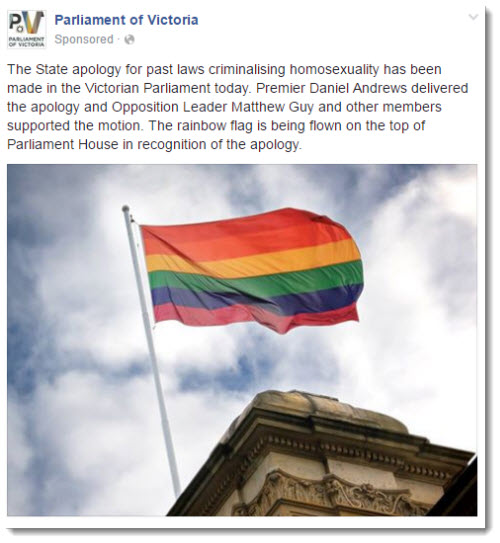 “Bill Shorten is very caring and very much in touch. Bill Shorten every single day is promoting our national economic plan for jobs and growth which of course is exactly what Australia needs.”

Shorten said in response that Cormann had “officially terminated” the government’s scare campaign. Reporters across Australia are currently having their email inboxes pummelled by press releases and transcripts from all the political parties, but interestingly, Cormann’s door-stop stuff up was not included in the transcripts of the day provided. They were sure, however, to send out the transcript for a doorstop later in the day where Cormann corrected himself:

“Malcolm Turnbull is an outstanding and very caring leader who is very much in touch and who is working very hard to secure the successful transition of our economy from resource investment driven growth to broader drivers of growth in a strong, new and diversified economy … I made a mistake this morning. I corrected it. I think that’s it.”

Chug-a-chug-a-chug-a-choo-choo! Prime Minister Malcolm Turnbull visited the marginal seat of Latrobe yesterday, enjoying the scenery of the Dandenong Ranges and stopping by tourist attraction Puffing Billy. It was a great picture opportunity, and a chance for the government to commit $6.5 million to the novelty train ride that doesn’t really go anywhere. 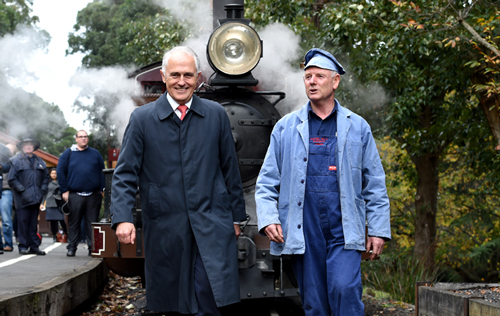 The pictures are lovely and may swing a few voters on Melbourne’s outskirts, but voters using Melbourne’s trains that actually get them from A to B are left scratching their heads. The government has parted with just $10 million for the Melbourne Metro Rail project — a $10 billion rail tunnel the Victorian government has committed to fund on its own after getting crickets from Canberra. The government has already been criticised for prioritising outdated technology when it comes to the NBN, and it’s not a great look now.

Don’t you love pork barreling?
A government can studiously neglect an electorate, industry or interest for two+ years (while constituents struggle) but come election time that “frugality” metamorphoses into largess – to buy votes?
It’s just a matter of what price the mark puts on their virtue?