First, do no financial harm: on exorbitant medical fees and pay disparity

What is in a medical fee? Well may you ask. When you go to your doctor, you may see a fees schedule on the reception desk — or you may have received a letter from the receptionist/practice manager indicating that you will be responsible for certain fees over and above what you will get back from Medicare and (possibly) your private health scheme.

It is not unusual to be asked to pay something in advance, before an appointment (usually for a procedure, endoscopy, etc) is even made. Even lawyers don’t make you do that, do they? So there are at least three fees:

And then there is what the doctor actually charges you. Again, this is not based on anything but what the doctor feels the market will support — and it usually does because, effectively, you have no choice. Do you ask for a second opinion? Do you have a discussion about the fee and why it is so much higher than the Medicare rebate or the AMA fee, when this person is going to put a new hip into you next week or open up your belly? I don’t think so.

These out-of-pocket expenses have been the subject of some debate over the past few years and have reached the point where even the Royal College of Surgeons has expressed its concerns.

The health insurance industry has recently made some forays into the transparency debate publishing data suggesting that some surgeons charge between $2000 and $10,000 for a prostatectomy when the Medicare Benefits Schedule item is $1935, and the AMA recommended fee is $4465.

Another example is the cost of knee replacements, which can really only be described as greed on the part of some surgeons — the Medicare rebate is $1318, AMA fee $3690 and yet some surgeons are charging up to $5500.

Interestingly, the health insurance funds have all of the data on fees charged by doctors in Australia — but they feel constrained to release these data on privacy grounds. Oh, for a government that would require them to do so.

Out-of-pocket expenses have been the subject of much discussion over the past few years since it now makes up some $23 billion per annum and the most rapidly rising part of the health budget. The Grattan Institute provided an in-depth review last year and there was even a Senate inquiry, the report of which makes interesting reading and is a good lesson in obfuscation, if nothing else.

So let us look at two other examples of “medical fee gaps” that our health system creates.

The first is the gap between what GPs and non-proceduralists earn in comparison to specialist proceduralists. The OECD report of 2013 shows that Australia has the second-widest gap between these two groups of all the OECD nations. (Another silver medal for Australia!)

A recent article in Australian Doctor demonstrates this clearly.

Could this disparity in earning capacity be influencing which specialties (and remember, general practice is a specialty) medical graduates decide to practice? Increasing HECS fee debts, along with other pressures of our consumer-driven society, I suggest, are making it more difficult to recruit to general practice. 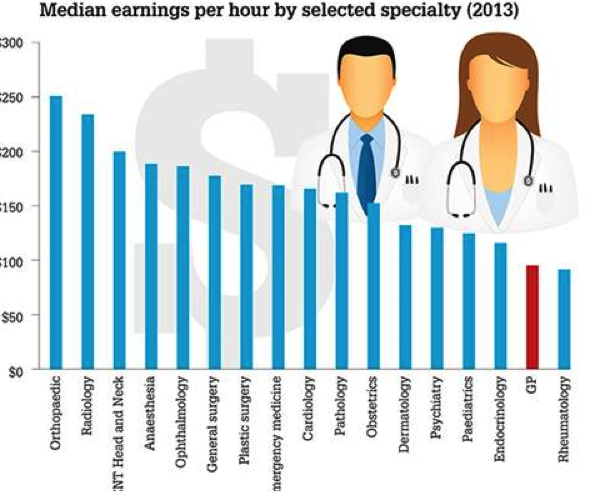 Now these are only median earnings per hour, and the OECD report suggests that specialists earnings are, on average, at least $1 million per year while GPs take home around $250,000. Funny that we openly tell the world about the benefits of our health system (and there are great benefits) underpinned as it is by general practitioners, yet we only pay them a quarter of what we pay specialists!

Our final example is that of the recent deal on pathology bulk-billing rates, on which both the major parties have once again caved to big business. Name me a pathologist who is a principal in one of the major pathology companies who is not on a six-figure income or has not received very significant financial rewards over the last decade as these entities were privatised. These companies return a good dividend to shareholders (and we should perhaps look at where those shareholders live). The pathology companies pay little tax.

Now it seems that, once again, general practitioners are going to foot some of the bill for the rent deals that were announced last week. When are we going to stop robbing the poor to support the rich?

So here are three ways we might start to have a conversation in this country about how we remunerate doctors:

These issues are important; remember one of the basic tenants of medicine is primum non nocere (first, do no harm). Should this be extended to financial harm as well?

Medicare’s future is at stake

A fairer way to increase co-payments

Fee-gouging medical specialists must be brought to heel

Well put Peter. Given that all the proceduralists gain most of their privately lucrative skills in the Public System (and that we fund doing countable things, rather than the thought behind it), the Canadian option seems the best considered. This is supported by the very small numbers of specialists leaking from the Canadian system compared to other Anglophone countries, including Australia.

I agree with your comments, Rhwombat.
One other issue I would like to see addressed, is the free hand-out of Medicare provider numbers to all doctors. We, the public pay for Medicare (and by general tax top up), so therefore, ’employ’ all of these doctors.
Why can’t we have a system where doctors ONLY get provider numbers if they set up practice in those areas of the country where medical services are below the national average? Rural and remote areas, and the low socio-economic suburbs in our major cities have far fewer doctors than those areas where the wealthy hang out…which leads to over-servicing by some doctors in the latter scenario.
The Canadian option should be seriously considered…it is not as though we don’t have plenty of very bright young people who want to study medicine and would accept these rules.
Very good article, Peter Brooks…many thanks!

Check out the German system: People only see a GP in cases of a cold or smaller ailments, for all else they go directly and without a referral to the respective specialist. Your back hurts? See the orthopaedic doctor. You’ve got problems with your reproductive organs? Go to a gynaecologist or a urologist respectively. Your child is sick? Take them to the paediatric doctor. And so on, you get the picture. The basic fee per visit is the same for EVERY kind of doctor; they can add to it only in an exactly regulated way. Four years ago, on a holiday in Germany, I had an incessantly itching ear, went to the Neck, Throat & Ears Specialist and paid 65 Euros for a thorough examination, a sonar test and a swab. That was the fee this doctor would have been able to charge the German equivalent to our Medicare. I don’t know what Australian N, T & E Specialist charges are but I as I’ve paid between 200 and 400 dollars for certain medical specialists I can only imagine that I wouldn’t have got away with the equivalent to 65 Euros. Australian specialist doctors seem to have the preconception (and are being supported in this by the system) that they are way more deserving than GPs. It’ll be hard to knock them of their pedestal.

Where do they get the figures re percentage of bulkbilling by GPs? There are very few in Launceston, even Tasmania.
Why do doctors’ fees need govt regulation, and not other professions like accountants or lawyers? Because they get govt support perhaps.

One might compare the AMA with the BLF. If one wanted to compare iron control, restricted entry and big buck$ for members.

The article does not consider the costs of running the business, the opportunity costs and accumulated debts of training and the lifestyle sacrifices that are made (which differ between specialties e.g. a transplant surgeon always on call vs a GP working Mon/Wed/Fri). It also doesn’t take into account academic and research activities, which are often subsidized by clinical work. This issue is highly complex but clearly more transparency around billing is required to enable us to make an informed decision about who we see and how much we pay. Fortunately, there is presently no gap in the public sector and hopefully it stays this way.