David Feeney really is not having a very good election campaign so far. Plus other media tidbits of the day.

A comedy of errors. Forgetting to declare a $2.3 million house on the register of members’ interests was the biggest own goal of Labor’s campaign so far, David Feeney admitted in an interview with Sky News’ David Speers last night. In the interview, he appeared to not know the difference between the school kids bonus and the baby bonus, and when quizzed on Labor’s policies said he didn’t know, as he’d been rather busy in recent days. 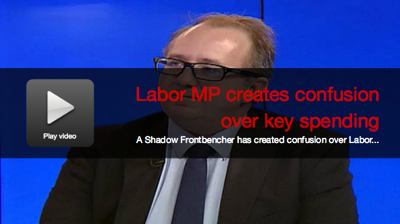 To add insult to injury, he then left his briefing notes on the couch outside Sky News’ Canberra studio, in an area frequented by MPs and journalists from all parties. On television this morning, Sky News’ Keiran Gilbert said the station had not distributed the briefing notes to anyone (though it has been showing them on screen all morning and if you squint you can basically read them). Somehow they got to The Daily Telegraph, which published extracts this morning … 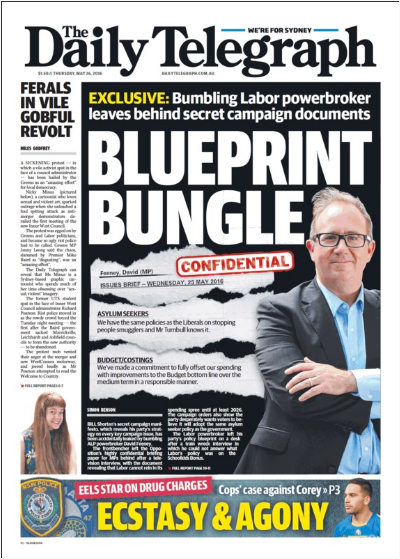 WA deal in sight. More shuffling of the deck chairs on the good ship Titanic that is the Australian print industry, with the oldest deal on the table — the takeover of News Corp’s sliding Sunday Times in Perth by Kerry Stokes’ Seven West Media — reportedly moving closer. The Australian Financial Review reported this morning that an end was “in sight” for the deal, which would also result in the associated website, Perth Now, being taken over by Seven West, which already controls the West Australian and the Seven TV network and dominates media in the state. “It is understood the Australian Competition and Consumer Commission has already been approached for its views on the transaction, and sources close to the competition watchdog say a deal should be done before the end of the month,” the AFR reported this morning. The West Australian’s website is a tie-up with Yahoo, while Perth Now has a snappy name and good brand recognition — one Perth media insider speculated it would be an attractive part of any offer when Crikey gauged attitudes towards the tip-up in March.

Seven West Media shares slid earlier this month (falling from a recent high of $1.12 a share to a low of $1.03 on Monday of this week). But they have since bounced and yesterday jumped 5 cents, or more than 4%, to $110, so obviously the deal has been done and the impact on Seven West won’t be as large as feared earlier this month. The other deal to watch is whether News Corp pays the $65 million for the regional newspaper business of associate APN News and Media. News Corp owns 14.9% of APN, and its boss, Michael Miller, is a former CEO of APN. — Glenn Dyer and Myriam Robin

Riley up. Speaking of the ABC, it’s promoted head of indigineous Sally Riley as the head of all scripted production. Riley has headed the ABC’s indigineous unit since 2010, and under her leadership it has delivered a string of highly acclaimed productions like Black Comedy, Gods of Wheat Street, 8MMM Aboriginal Radio, and Redfern Now, as well as the eagerly anticipated Cleverman (on which Riley was executive producer). Riley is an indigenous woman of the Wiradjuri nation —  there aren’t too many like her in the executive ranks of Australia’s television industry. — Myriam Robin

Vice cuts. On Tuesday The Telegraph newspaper in London cut a dozen or so senior reporters and editors, and on Wednesday Vice News revealed it had cut 20 journalists, producers and other staff in the US and UK. Five people were cut in London, including three online reporters. In the US the count was 15. The Press Gazette reported that “The cuts have been made under newly appointed global news operations director Josh Tyrangiel, formerly Bloomberg’s chief content officer, who is looking to consolidate the brand’s offering ahead of the launch of a nightly news broadcast on HBO, which he will oversee.” The Vice News UK website, launched in 2014, will retain a team of 18 editorial staff, including production editors, broadcasters, reporters, producers, video journalists and researchers. — Glenn Dyer

Pyrrhic victory for CBS. America’s 2015-16 ratings battle is about to end, and CBS will win the season by any traditional measure, but eking out higher audience figures and share is proving to be impossible.

CBS will end up top again in the most important advertising/viewing demographic in the US, 18- to 49-year-olds. Sports programming again played a major role in the results. CBS had the Super Bowl this year (NBC had it in 2015, and Fox has it in 2017). This year’s game dragged in 112 million viewers.

Over the past year, Fox benefited from greater stability as a result of its big Empire series — the second-highest-rated 18-49 series in prime time, while the reboot of The X Files did well with its six episodes (which meant it couldn’t be classed as a series).

Mediapost pointed out: “While traditional TV measures — Nielsen same-day program ratings — continue to point lower, all TV networks believe a different story would be told if unaccounted time-shifted viewing after seven days — through VOD, digital media and other platforms — were added into the mix.” — Glenn Dyer

Not only was Feeney complicit in white-anting Kevin Rudd in 2010 but lately he appears hellbent on doing the same to the Labor Party in general not to mention his former ally, Bill Shorten .

The Labor-Feeney 2-step – one step forward, two steps back?

Feeney is an utter waste of space which could be filled by a decent politician, ie anyone not extruded from the cloaca of the ALP machine.