Malcolm gets the waters flowing while Bill is proud to be sorry.

Bernard Keane, Crikey politics editor: Remarkably, Treasurer Scott Morrison’s black hole black hole (AKA #blackholegate) carried over into a second day and dominated evening news bulletin coverage, alongside some nice pics of Prime Minister Malcolm Turnbull on a steam train (high-speed rail here we come). Bad news for the Coalition and another win — purely by default — to Opposition Leader Bill Shorten. Even a staggeringly inept performance from David Feeney — who should have been dumped last week by Labor — couldn’t even it out for the government.

Dr John Hewson, former Liberal Party leader: It’s no longer a “gotcha moment” in campaigns but a “doing a Feeney”. It covers a host of mis-steps from memory loss, doing something stupid, forgetting policy detail, inadvertently “leaking” your confidential notes, and so on. Knocked out “doing a Dutton” or “doing a Joyce”, but not by much. Distractions clouding messages continues. Black holes, in numbers and/or policy detail, on both sides. All probably moderately entertaining for the voters, but they remain generally disengaged. Something has to give! No winner.

Dr Zareh Ghazarian, political scientist at Monash University and author: What a day for Deputy Prime Minister Barnaby Joyce — a Hollywood celebrity gave him free publicity, then he went on to raise debates about cattle exports and links with asylum seeker boats. He dominated the news cycle and overshadowed other leaders. No winner.

Simon Breheny, director of policy at the Institute of Public Affairs: With the Liberal candidate for Whitlam resigning in spectacular style, the Labor Party had a win. But the Coalition announcement of a substantive water policy in Queensland took the edge off an otherwise bad day. Yesterday goes to the ALP. 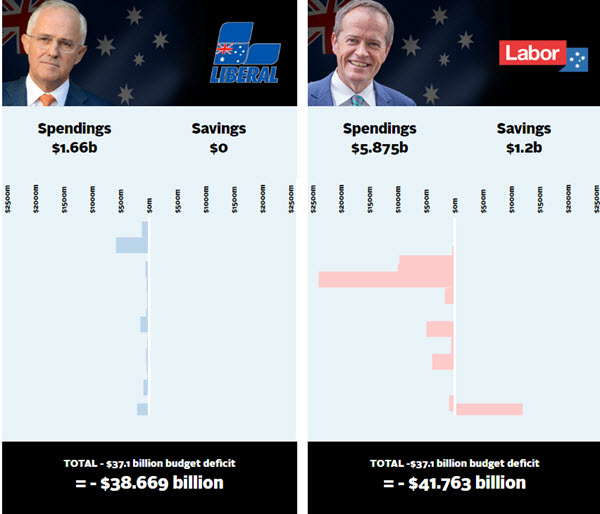 Malcolm Turnbull is the bigger spender today, though he’s not in the “spend-o-meter” territory yet. He made a big funding promise for Queensland water projects, while Labor is dedicating funds to indigenous healthcare in the Northern Territory.

Malcolm Turnbull: The Prime Minister is in Queensland again, this time in the marginal electorate of Capricornia to support sitting Liberal MP Michelle Landry, who faces an uphill battle to hang onto the traditionally Labor seat which she won in 2013. He made a stop at the Paradise Lagoons cattle station outside Rockhampton where he praised Barnaby Joyce for the increase in cattle prices and the benefits of Australia’s free trade agreements. He was launched an attack in the opposition, saying the shadow cabinet doesn’t know its own policies.

Bill Shorten: The Opposition Leader is in Darwin today where his main focus will be promoting Labor’s healthcare policies. He unveiled $26 million worth of commitments to boost indigenous health programs as part of the “close the gap” campaign. He also took time to mark the anniversary of National Sorry Day along with outgoing Senator Nova Peris, who made an emotional statement to the media about her decision to leave the Parliament. Shorten avoided questions about David Feeney by attacking Barnaby Joyce and his comments linking live export and asylum seekers.

Richard Di Natale: The Greens leader started his day in Canberra where he talked to Virginia Trioli on ABC News 24 about last night’s regional leaders debate. He then traveled to Melbourne to promise new funding for patients to access the HIV prevention drug Pre-exposure Prophylaxis.

The PM is still getting more attention, but not by much …

It’s been a while since we saw some pork-barreling, so here’s a little taste from Bill Shorten who announced $295,000 to the National Kidney Health Taskforce. 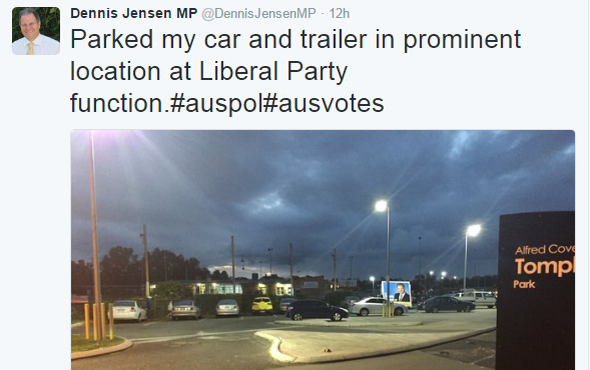 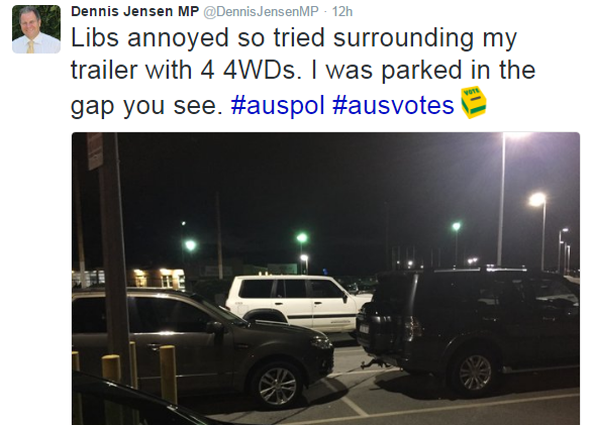 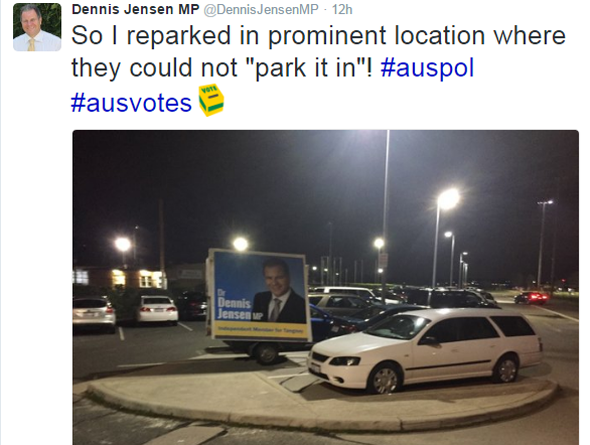 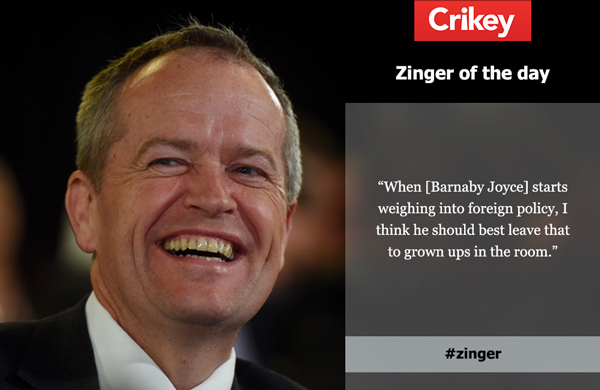 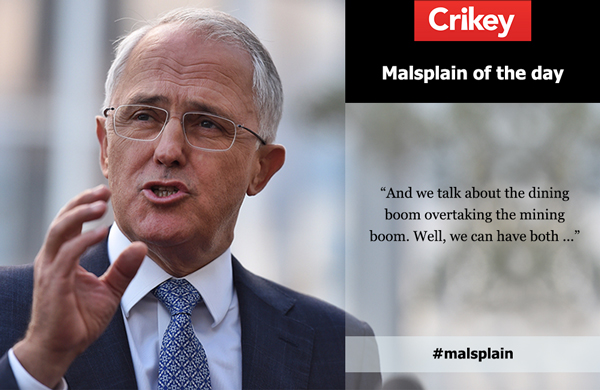 ANOTHER ONE BITES THE DUST

A week is a long time in politics — and eight weeks is an eternity — so it’s no surprise there’s been a few dropouts already. Liberal candidate for Whitlam Carolyn Currie became the latest casualty yesterday after she said she felt unsupported and had no choice but to resign. She wasn’t keen to back her own party either, saying in an ABC Radio interview that Whitlam needed a strong candidate, “possibly an independent, possibly a Green”.

Barnaby Joyce is having an, um, interesting time during this election campaign. It wasn’t enough to pick a fight with Johnny Depp and compare himself to the psychotic cannibal, Hannibal Lecter, now he’s linked the increase in asylum seeker boats with the end of live cattle exports at last night’s regional leaders debate. The previous Labor government’s decision to halt live cattle exports to Indonesia in 2011 is, according to Joyce, a reason for the increase in arrivals of asylum seeker boats. In lieu of an autobiography, perhaps Barnaby’s career could be summed up in the great Salvador Dali painting, “The Great Masturbator”.

BATMAN AND THE JOKER

Member for Batman David Feeney may not have crazy green hair, dark eyes and big red lips, but he’s fast becoming less electable than the popular comic book villain. Just days after news broke that he’d failed to declare his $2.3 million Northcote home on the Register of Members’ Interests, the Labor frontbencher has dug himself an even deeper hole. Feeney appeared on Sky News last night and admitted he’d scored the “biggest own goal” of the campaign so far before stumbling his way through questions about Labor policy. He wasn’t able to tell host David Speers whether a Labor government would keep the school kids bonus and seemed to mix it up with the baby bonus. Oh, and he left behind a confidential campaign strategy document. It’s OK though, it’s not like he’s running for government or anything …

It felt like something was missing at last night’s NT Senate candidates debate. Labor Senator Katy Gallagher was there; so was Greens candidate Christina Hobbs. Liberal candidate Zed Seselja was there too, but for some reason he was less animated than usual … 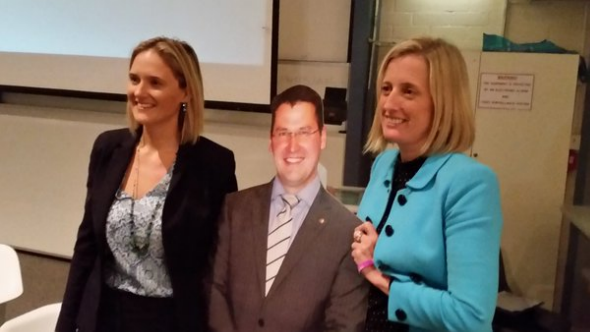 Independent journalist Dave Donovan (@davrosz) wins today’s tweet prize. Oh Christopher Pyne, it’s not that we enjoy making fun of you, it’s just that you make it so easy … 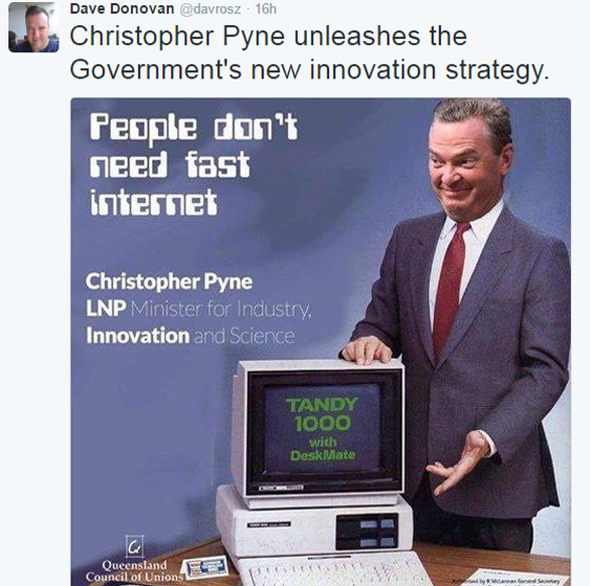 Malcolm Turnbull is trying to save a marginal Queensland seat, while Shorten is promoting indigenous health in Darwin. Both leaders had to deal with gaffes from members of their own party. Richard Di Natale returned to Melbourne and promoted HIV treatment drugs.

Those would the the ACT senate candidates, not that other territory.
As it was organised by the ANU Student Union to a fixed set of topics it isn’t surprising that Zed was a no show. The session was probably for more civilised because of it.

Yes they are ACT not NT.

Given that there are so many weeks remaining perhaps this might be the ideal time for people to reread Horne’s “Lucky Country”, if only top understand that he meant a first rate country run by 2nd rate people.
Otherwise we are going to end up with 3rd raters in government or worse, Barnaby Rudge & David Feeney the Mad Barbarian of Batman.