Alan Jones and Malcolm Turnbull bury the hatchet. Plus other media tidbits of the day.

Turnbull faces Jones. Shortly after 7am this morning, Malcolm Turnbull sat down for his first interview with 2GB’s Alan Jones in two years.

They talked superannuation and the Safe Schools program, and the whole thing was a bit of a fizzer. At least from our point of view.

“For those of you expecting some kind of brawl, forget it. It won’t happen,” Jones told listeners. Damn.

The Prime Minister will be back next week, Jones promised listeners. — Myriam Robin

Thiel v Gawker? The lawsuit that could put an end to Gawker is being secretly funded by Silicon Valley billionaire Peter Thiel, Forbes has reported this morning.

Thiel is the somewhat eccentric co-founder of Paypal and Facebook’s first outside investor, now occupied with pouring money into finding a way to make humans immortal and acting as a Republican delegate for Donald Trump. He is also a major sponsor of the Committee to Protect Journalists, an American non-profit that promotes press freedom.

Thiel’s spokesperson declined to comment to Forbes on whether the billionaire was funding wrestler Hulk Hogan’s lawsuit. Hogan is suing Gawker after it aired snippets of a sex tape involving Hogan and the wife of a friend. The case is still being appealed, but an early ruling awarded Hogan massive damages (US$140 million) that would bankrupt Gawker if it was forced to pay them.

Forbes speculated on reasons Thiel could have to fund a case against Gawker. He’s gay, and before he was public about his sexuality, Gawker wrote a piece calling him “totally gay”. He’s also been the frequent subject of reporting by Valleywag, Gawker’s intensely gossipy and highly cynical Silicon Valley title.

In 2009, he said that while he didn’t feel he was especially targeted by Valleywag, he thought it had the “psychology of a terrorist, where it’s purely destructive”:

“It scares everybody. It’s terrible for the Valley, which is supposed to be about people who are willing to think out loud and be different. I think they should be described as terrorists, not as writers or reporters.”

More job losses. STOP. A day after an anodyne management memo to staff talked about a new “employee-friendly” culture introducing flexible working “in line with the changes in the media world”, The Telegraph newspaper in the UK has taken the axe to the jobs of more than a dozen senior (and expensive) journalists in the third clean-out in as many years. The Telegraph has joined Trinity Mirror, The Guardian and Express Newspapers in cutting staff, including the jobs of several hundred journalists. More cost cuts could be announced tomorrow night with DMGT, the owners of the Daily and Sunday Mail, revealing interim results that are expected to be weak.

The Telegraph memo was issued by Telegraph Media Group CEO Murdoch MacLennan, who said the group was going to focus on “keeping hold of top talent” and enhance its existing graduate scheme while undergoing a restructure that he claims will bring in a culture of “smart working” (which seems to be code for hot-desking). He told staff this would cut back space used at The Telegraph’s Victoria HQ in London, which MacLennan said would also allow it to “save significantly on rents and rates”. The company will also close the staff canteen (which the memo said was being used by other tenants in the building), which will be replaced by three fully fitted out kitchen and eating areas.

The losses at The Telegraph are reported to include senior staff on the features, culture, picture and foreign affairs desks. Included in the reported list was the paper’s deputy editor, Liz Hunt, plus the head of the paper’s arts and entertainment coverage, the paper’s foreign news chiefs and Asia editor (named as Philip Sherwell and said to be the longest serving journalist on the paper) the middle east editor, and at least one consumer and technology reporter.

Earlier this year, The Telegraph was forced to reverse plans to install staff monitoring equipment under their desks. The company had employed Deloittes to conduct a top to bottom review of the paper and its cost base and the memo on Monday and then the round of sackings were the first public results of that review. — Glenn Dyer

Video of the day. At the Sydney Writers’ Festival, Sarah Ferguson said former Labor senator John Faulkner “makes a fetish out of his discretion”. Luckily for us, Faulkner was in the audience to defend himself … 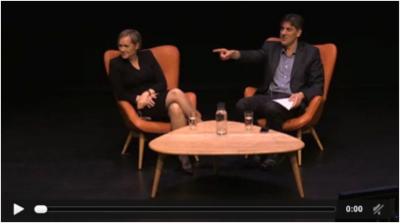 Front page of the day. Annastacia Palaszczuk gets Legofied … 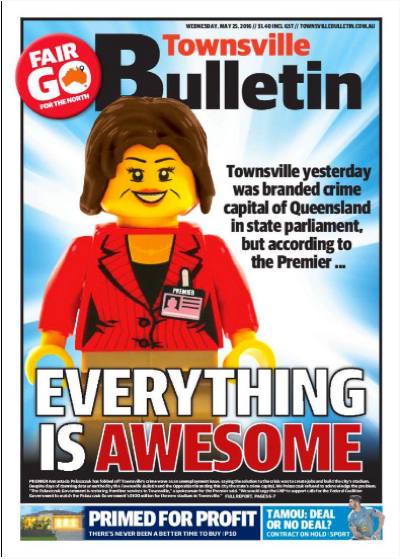