One is the loneliest number. Yesterday we told you that journalism professor Matthew Ricketson had survived a meeting of the media union unscathed, despite a three-month campaign in The Australian to have him turfed out as the media union’s representative on the Press Council because of his role in the Finkelstein inquiry. Today’s Oz says there were “a number of dissenting voices” to his position on the Press Council. While we’ve heard the advisability of continuing with Ricketson, who, after all, had been invited to put his name forward by the union itself, was lengthy, a tipster says when the issue was put to a vote, only one was cast in favour of removing Ricketson, and one councillor abstained.

Surfing NSW. You can’t miss Bill Shorten as he jogs around the country, but NSW Premier Mike Baird is trying to keep his morning activities on the down-low, according to a tipster who sent us this note last night:

“Residents in sleepy Cunjurong Point NSW were wondering this morning what the entourage of important looking people in their shiny cars were doing there. When the locals asked — twice — no answer as to what they were doing … well, as it turned out Mike Beard went for a surf and didn’t want anyone to know.”

Agile co-conspirator. New Liberal Senator James Paterson has often mentioned that his wife, Lydia, is an entrepreneur and part of Prime Minister Malcolm Turnbull’s ideas boom — he even mentioned her in his maiden speech:

“My No.1 co-conspirator in all of this, though, has been my amazing wife, Lydia. She is, and always will be, the first and last person I turn to for advice. Over the past few months she has balanced supporting me with growing her new, agile and innovative start-up business.”

According to our colleagues at StartupSmart, business is booming, with Lydia Paterson’s Care Guidance start-up, of which she is CEO, completing a successful seed funding round:

“Melbourne-based Care Guidance was launched at the start of 2015, and provides a platform matching aged care providers with those who need care.

The company handles all the paperwork and details, and determines the correct care for users across all available options.

The company has raised $450,000 already across two pre-seed funding rounds in the past year.

Care Guidance’s funding goal was $400,000, and after reaching that the company announced they would be accepting oversubscriptions for another two weeks.”

Vote No. 1 Greens, says Liberal. The Liberal candidate for the newly created seat of Whitlam, Dr Carolyn Currie, stepped down from running in the safe Labor seat in an interview on the local ABC this morning, saying that she was a “candidate with no troops” and that she had been told by fellow members they didn’t want her to run.

This morning Currie said locals didn’t want a candidate at all and wouldn’t help her:

RHEINBERGER: Okay, how did you get the message that they didn’t want to run a candidate at all, let alone you, who told you that?

CURRIE: They told me!

RHEINBERGER: Who told you that?

CURRIE: I can’t disclose confidential inside information, However–

RHEINBERGER: Was it a vote of a branch, a particular person within the Liberal party in the Illawarra?

CURRIE: No look, you’re probably going to lead to my expulsion, very shortly. It was actually what they call an FEC meeting — FEC is the Federal Electoral Conference and I was informed by a number of people, mainly females, that they did not want a candidate at all.

RHEINBERGER: How did it get that far and to the point where you have to resign?

CURRIE: I was installed over the heads of state exec, which happens the same as Trades Hall Labor party. That where you have problems within a branch the central body will endorse the candidate. Then all the branches have to fall behind him. I can’t say more at this point time. I have done the right thing by my party, by country, by this area.

RHEINBERGER: Are you relieved?

CURRIE: I can’t do anymore. Goodbye.

She also said the seat needed a Green or an independent “to be able to instrumentalise the best outcomes for this area. I cannot offer that, and meanwhile I don’t believe that I need to be a sacrificial lamb, travelling a number of steep inclines that have yet to be fixed.”

A previous interview on the ABC two weeks ago, just after she had been announced as the candidate, may give an idea as to why the local Liberals were not so keen on having her name on the ticket:

Melinda James, ABC: Well, Whitlam has seen a slight redistribution and it’s taken in more of the Highlands, more of the highlands centres. But it’s also been traditionally a Labor stronghold — a lot of working-class people and a safe Labor seat. Are you concerned about connecting with those people of the “lowlands”?

CURRIE:  I’m not concerned at all because quite frankly I’ve had three politicians in the family — Labor, Country Party and Liberal. I’ve been a worker all my life. I married a boy from the ‘Gong — his father worked in the steelworks — so I’m very able to mix at all levels of the circle. I’m by no means born with a silver spoon in my mouth — you just have to look at my hands. I’m a single woman who’s worked her way to financial freedom in some ways by using her brains and my mother was the first female CEO in Australia and she said: “Never trust anyone to look after yourself — learn to look after yourself.”

Currie was quizzed about whether or not she actually lived in the electorate, and although she admitted that she worked in Sydney and was based in Mosman, she said she did have a property in Bundanoon in the Highlands.

“I’m still working — unfortunately I can’t work in the preferred area that I would like to live in, which is the Highlands, but I have a home there. I bought a beautiful place in Bundanoon, which was the old police station, the old electoral office, the savings bank, etc, and it was set up by a local family because of the fights and disorder that breakout between timber merchants, railway workers and miners.

“I’ve been going to that area since I was a child because my uncle was the MLC for the area and his wife was my aunt. They had a dairy farm so I used to spend a lot of time in the Southern Highlands as well as in what I call the ‘lowlands’ because we used to holiday down there, and I married a boy from the ‘Gong … My fifth degree was from the ‘Gong in forensic accounting. I just love the area, and my motivation for standing is that I do not want to see the water resources of that area depleted, and I believe it is a federal issue when water is affected by coal mining and inappropriate coal mining in certain areas.

“I assure you I will be living in the area because I think I deserve to live in paradise after 66 years of living in what I call the ‘Shitty’.”

Currie has already been purged from the Liberal Party’s website.

Imagine all the (bearded) people. The Greens’ only lower house, MP Adam Bandt, has released his first campaign advertisement, which is notable only because it fits every stereotype ever thrown at inner-city Greens-voting Melburnians. The only man without a beard is Bandt himself (and a baby). 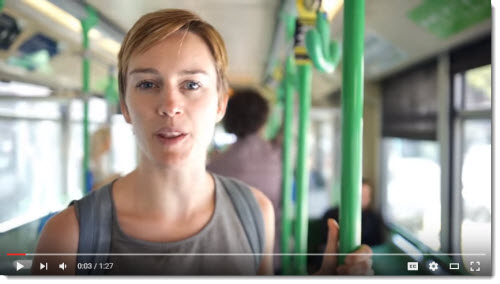 So an aspiring Politician wanting to run in a seat (where her no rational person in her Party would want to waste scarce resources) claims someone or other she can’t name gave her scant encouragement.
Perhaps she’d be better suited to run on behalf of the Marijuana Party?