Isentia Index: Turnbull and Shorten bat on, despite the lack of a crowd.

News and Fairfax websites have all but given up on election coverage, burying it somewhere between the GoT spoiler and the latest car review down at the bottom of the home page, but the leaders and parts of the media are batting on manfully, as the campaign comes more and more to resemble your average […]

News and Fairfax websites have all but given up on election coverage, burying it somewhere between the GoT spoiler and the latest car review down at the bottom of the home page, but the leaders and parts of the media are batting on manfully, as the campaign comes more and more to resemble your average One Day International cricket match: a bit of interest at the start, followed by a long stretch of boring overs in the middle that no-one will remember, before getting to either an exciting, nailbiting finish or dribbling out to an easy win. Which will this one be?

Immigration Minister Peter Dutton’s comments a week ago about the literacy and numeracy skills of refugees brought the asylum seeker issue right back to the middle of the campaign for a few days, but even social media couldn’t maintain the rage for all that long, with Opposition Leader Bill Shorten desperate not to talk about the issue and Prime Minister Malcolm Turnbull not able to whip up the “stop the boats” mantra with even a fraction of the enthusiasm Tony Abbott put in to it.

The AFP raids on Opposition defence spokesperson Stephen Conroy’s Melbourne office, in relation to leaked NBN documents, got plenty of coverage over the weekend, with a lot of focus on who in government knew what and when about the investigation, pushing Communications Minister Mitch Fifield up the list along with Conroy.

Shadow minister for Justice David Feeney got quite the telling off from his leader after failing to declare a $2.3 million house on his assets register (negatively geared, of course) while the media moved pretty quickly past revelations that Greens leader Richard di Natale was using lowly paid au pairs, as he actually fell nine spots, while the Clivosaurus bowed out with a whimper, not a bang. Policy announcements? Oh yes, there were a few of those, but nobody noticed.

Oh and Deputy Prime Minister Barnaby Joyce said that the whole climate change hoo ha might actually be a thing after all. Perhaps he’s cottoned on that there might be a few other people in New England who think it might possibly be a thing too? 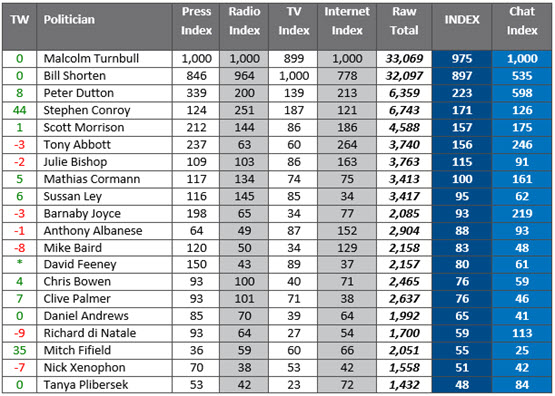 No shock that Peter Dutton has leapt up the social media list this week, plenty of online rage following his comments last week, for 24 hours or so, anyway.

The reception to Dutton was far more favourable on talkback, but even there, the passion was short-lived and limited mainly to Sydney commercial stations.

For the partisans on both sides disappointed that there aren’t leaders they can properly hate in Australian politics anymore, well at least there’s still Nick Kyrgios.