Crikey Campaign Scorecard: Libs fall into a black hole of their own making

ScoMo's "black hole" did not go down as well as he'd hoped. And Nick Xenophon is also in the crosshairs.

Bernard Keane, Crikey politics editor: With a debacle of a “black hole” media conference in Canberra, Scott Morrison handed a clear win to Labor. Even a strong performance opposite Leigh Sales on 7.30 couldn’t retrieve the day for the Treasurer. The commercial news coverage in Sydney last night was damning, especially on Nine.

John Connolly, founder of John Connolly and Partners public relations firm: It’s miracle Wednesday! Only [37 or so] sleeps to go and politics is off the front pages of our capital city dailies. But that hasn’t stopped our warring parties. Malcolm Turnbull — winner of the 1972 Lawrence Campbell Oratory Competition — has decided the threat of state-of-origin debater Bill Shorten’s team, and Nick Xenophon’s Greek Orthodox multicultural group, is too scary, and has gone negative. And hasn’t it worked a treat? … You have to go to page 11 of the Hun to find Malcolm has lashed Bill’s spend-o-meter and Canberra’s newest hipster Chris Bowen’s beard. And I agree; hasn’t Australia reached peak beard by now? OK, despite all that, Mike Kelly will take Eden-Monaro form the invisible economist Peter Hendy and the ALP will also take Barton, Hasluck and Reid. But the Coalition will still win — as will, more importantly, the Swans on Friday night.

John Hewson, former Liberal Party leader: While Shorten had been marginally ahead in the campaign and building momentum, he self-inflicted the first “gotcha moment” of the campaign by referring one of his initiatives to the “spend-o-meter”, in turn launching every astrophysicist and economist in search of “black holes”. Unfortunately, all sides suffer from hypocrisy when it comes to policy costings. Watch this space.

Jane Caro, author, social commentator and communications consultant: I still think Shorten is having a better time of this campaign than Turnbull. Shorten’s confidence keeps growing; Turnbull looks like he’d rather be anywhere than doing this. That’s because, of course, Shorten is a man with nothing to lose. He has already done better than anyone expected, and the Coalition will lose seats in this election even if they (as is still most probable) win in the end. Turnbull is a man who has already lost both his personal popularity and his overwhelming lead over his opponent. He is doing worse than anyone thought possible. His win looks like it will be tight and that will create unending difficulty for him as PM (and he knows it).

Yesterday, the ALP won because the Coalition scored a spectacular own goal. Morrison and Cormann thought they were onto a winner with the $67 billion “black hole” in Labor’s costings and they — understandably — went hard on it. It played beautifully into the belief that the ALP is filled with irresponsible money managers and spendthrifts (Turnbull’s “spend-o-meter” and “billion-dollar Bill” taunts). Unfortunately, because they screwed up on the maths (or some minion did, anyway) it has backfired big time. They have had to admit there is a $35 billion black hole in their black hole. Ouch!

This is a classic case of overreach. The public don’t care about the numbers so much — anything with two digits before the word billion sounds big to them — but to revise down by half the next day looks careless and over-eager. Worse, it allowed the ALP to pour scorn on the Coalition and changed the story from the ALP’s profligacy to the Coalition’s incompetence with (even worse for them) numbers!

Fundamentally, the ALP looks like it’s enjoying this campaign much more than it thought it would, while the Coalition is looking increasingly nervous. Those nerves, it seems to me, are the cause of unforced errors like yesterdays.

Sue Cato, businesswoman, media commentator and founder of the Cato Council: The great disengaged — pretty much anyone not actually working on the campaign — would have called yesterday a nil-all draw, but then then they have probably said that about every day of the campaign so far. The decision by the SMH and The Age to take their journos off the campaign buses for two weeks speaks volumes about the campaigns and the lack of interest in the broader electorate. The question is how will the campaigns get our attention when it matters in the closing weeks. No hints yet. The Nova Peris mystery morning meant lost hours from the planned messaging for the Shorten campaign, especially for footy fans given the AFL angle. While there have been some bruises, the Coalition starting to campaign on their home turf — economic management — is forcing Labor to engage. Every day feels like a hard slog for the campaign teams.

Labor continues to focus on health while the Coalition’s spend-o-meter ticks over the $1 billion mark after a bailout package for dairy farmers was announced. 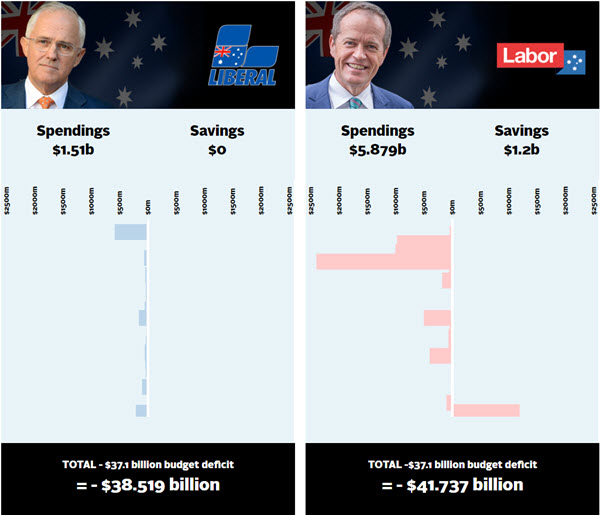 Malcolm Turnbull: Malcolm Turnbull spoke with Alan Jones for the first time in two years this morning. The last time he appeared on the veteran broadcaster’s show the PM refused to follow Jones’ directions to repeat after him support for the 2014 budget. “Alan, I am not going to take ­dictation from you,” Turnbull said in that interview. “I am a cabinet minister.” This morning he defended the Coalition’s changes to super, which Jones called “toxic”. Turnbull said that the changes were “fair and well targeted”. The PM met with Richmond Football Club’s star Bachar Houli, the first Muslim to play AFL, at Punt Road. He announced $625,000 in funding for the Bachar Houli Cup and Leadership Program, a program which seeks to attract young Muslims to the game. Turnbull later headed to the Dandenong Ranges, where he is expected to discuss the Coalition’s tourism policy.

Bill Shorten: Also in Melbourne, Bill Shorten addressed the media to announce $8 million in funding for ovarian cancer research this morning. He attacked the $50 billion tax cut in the 2016 budget and responded to the complaint made by the Heritage Bank about Labor’s “putting people first” slogan. “The Labor Party has been putting people first for 120 years. It’s the idea upon which the Labor Party was formed,” he said. Asked about Nova Peris’ replacement, Shorten said: “The Labor Party has picked replacements in the past. We have processes to do so, we will do so again quickly.” The Opposition Leader will head to the Northern Territory later today.

Richard Di Natale: The Greens leader will today head to Goulburn in NSW, where he will debate Deputy PM Barnaby Joyce and shadow agricultural minister Joel Fitzgibbon. Di Natale has spent the last couple of days in regional NSW and yesterday the Greens announced $280 million plan to bridge the divide between mental health services in the city and in rural and regional areas. The Greens have also announced a $4 billion plan for public hospitals.

Barnaby Joyce: Barnaby Joyce has announced a $580 million plan to assist dairy farmers affected by the slashing of milk prices, the majority of which will go towards concessional loans. He defended the implementation of concessional loans for drought-affected farmers on Radio National’s AM this morning.

And the long-running feud between the leader of the National Party and human scarf Johnny Depp continues after the Pirates of the Caribbean star said on Jimmy Kimmel Live that he was a little concerned about the man he named “Barnaby Jones”. “He looks somehow, like, inbred with a tomato,” Depp said. “It’s not a criticism. I was a little worried. He might explode.” Barnaby Joyce responded to the comments saying: “I’m turning into Johnny Depp’s Hannibal Lecter, I’m inside his head, I’m pulling strings and levers. Long after I’ve forgotten Mr Depp, he is remembering me.”

Nick Xenophon appears to be in a spot of bother over allegations of irregularities in political donations. ALP national secretary George Wright this week asked the Australian Electoral Commission to investigate donations from spectacles retailer Ian Melrose, which he alleged were loans. If they are loans then that would be a breach of the electoral act. Melrose has donated $175,000 to NXT’s campaign. Xenophon said in 2010 that: “If you give someone $1000, you support them; if you give them $100,000, you own them.”

Meanwhile, Pauline Hanson is back with a vengeance; it appears the Queenslander, best known for her starring performance in Pauline Pantsdown’s classic “I don’t like it“, has a realistic chance of returning to the Senate. Yesterday, the leader of the One Nation party claimed credit for stopping the boats. “If it wasn’t for myself and Pauline Hanson’s One Nation they would never have put a stop to the boats coming to Australia, the illegals, refugees,” Hanson said on 612 ABC Brisbane yesterday. “[Howard] picked up a lot of things that I spoke about.” The One Nation candidate for South Australia,  Steven Burgess, told The Advertiser yesterday: “One Nation is looking at zero Islamic immigration until Islam is reformed. At this stage [South Australia] has been well insulated, but it will only be a matter of time; once the population increases we will see exactly the problems they’ve had in Sydney, Melbourne and the rest of the world.”

Shorten was everywhere on the idiot box yesterday, but Turnbull was still ahead in overall mentions. 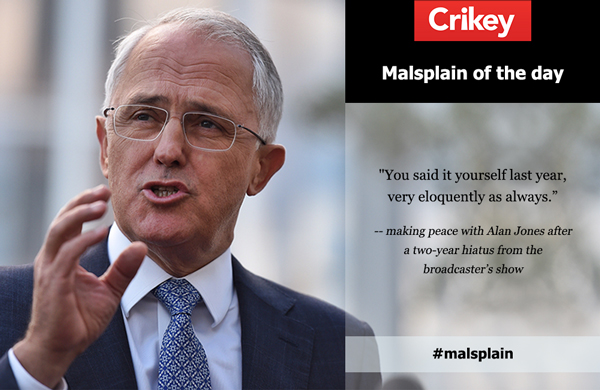 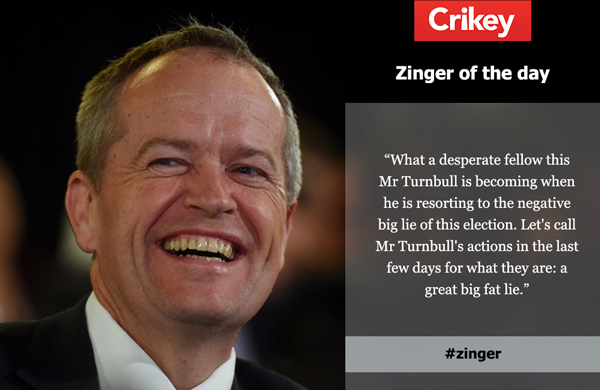 Fairfax has reported that Tony Abbot’s campaign in Warringah has “succumbed to bitter infighting”, with some local Liberals saying that they expected Tony Abbott to take a diplomatic position and others saying that the former PM’s campaign was suffering from the same sort of problems that plagued his prime ministership. “No one expects Tony to hang around for long,” said one. “Things are not well in Warringah,” said another. “It reflects the way Tony deals with people: you’re either with him or against him.”

“Bill Shorten is very caring and  very much in touch and Bill Shorten every single day is promoting our national economic plan for jobs and growth which is of course exactly what Australia needs.” — Mathias Cormann. Whoops. 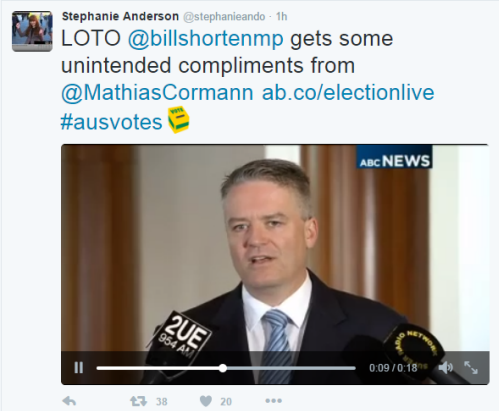 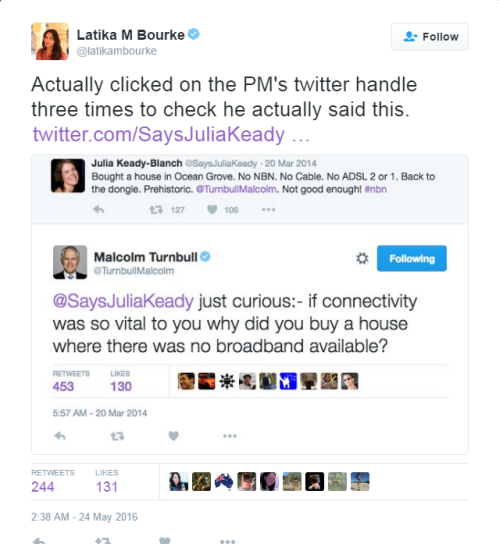 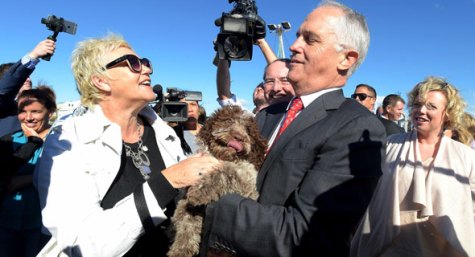 The automaton had a Shorten?

The reference to Bachar Houli as the AFL’s first muslim player is incorrect. Adem Yze (Melbourne) and Sedat Sir (Western Bulldogs) preceded him.