Words are hard. What actually does “fresh” mean? Don’t ask Coles’ social media team — they are struggling with that today. Yesterday, a post on the supermarket giant’s Facebook page asked if Coles’ own “Coles Brand Fresh” milk was made from reconstituted milk powder rather than being “fresh”, as the name suggests. In answer to the post, Coles said “We can confirm that Coles Brand Fresh milk is made from reconstituted milk powder.” 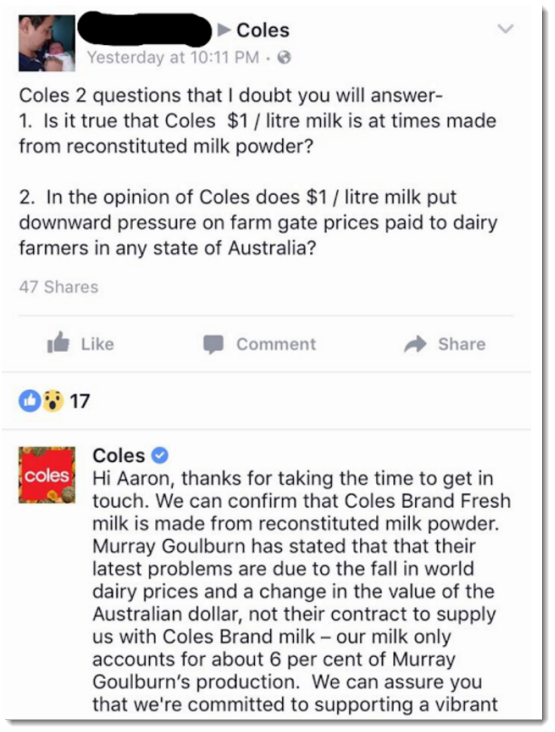 The official response also defended the amount Coles pays to Murray Goulburn for its home-brand milk, saying that Coles’ milk only accounts for 6% of Murray Goulburn’s production. After the post was shared on Reddit and gained traction in the media overnight, Coles was quick to say that the post featured a fairly major typo, and that Coles Brand Fresh milk was, in fact, fresh milk, not made from powder. The original message is the one that has stuck, though, with many follow-up posts and comments on Coles’ Facebook page from customers expressing their disgust with the supermarket. With so much focus on Coles and its deal with Murray Goulburn, you’d think staff would be on top of where the milk comes from.

Nanananana … The Greens are making a serious play for the seat of Batman in Melbourne’s inner-northern suburbs, but they might have missed the best way to appeal to hipsters in the seat: 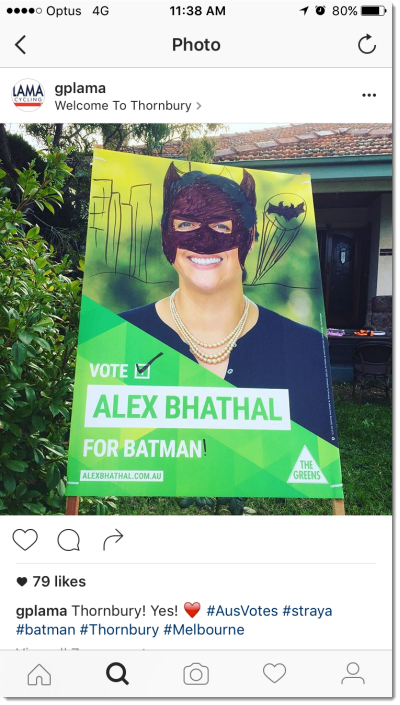 Singh signs. While much attention has been paid to lower house candidates, a tipster says voters in Hobart have been bombarded with posters of Labor Senator Lisa Singh, who faces a struggle to get re-elected to the upper house. Our tipster says “I’ve received a postal vote application from her, she has corflute signs with her name and picture around the area and there is a big LED billboard on corner of Elizabeth and Federal St, North Hobart with her name and picture.” 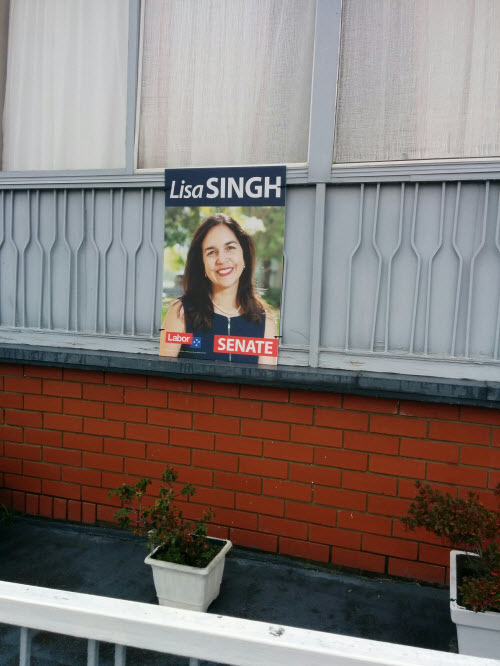 “I’ve only seen her signs around, nothing from any other ALP candidates, not even for the lower house candidate for Denison, who has the best chance of beating Wilkie. Nor even general ALP voting signs,” the tipster said.

Singh was dropped to the sixth place on Labor’s Senate ticket earlier this month, behind senators Anne Urquhart, Helen Polley, Carol Brown and Catryna Bilyk and union leader John Short. It’s almost certainly unwinnable, and Singh has told the The Mercury “Being re-elected would still take something pretty special and historic”. Before the double dissolution election was announced, Singh had been relegated to fourth place on the ticket and had blamed factional deals for her position on the ticket. Looks like she isn’t going down without a fight.

Energetic donations. With Linc Energy now headed for the corporate grave and big questions over who is going pay for the environmental mess it created on the Darling Downs in Queensland, perhaps it’s time to look at the vast amounts of money the company blew on political donations. As recently as January 2014, Linc gave a monster $100,000 to the Liberal Party; it gave another $100,000 to the LNP in 2012 (plus another $20,000 to the federal Liberals that year) and $55,000 to the Liberals during the 2010 election campaign, along with around $23,000 to federal and Queensland Labor and another $25,000 to the LNP. If there’s a need for some cash to help clean up Linc’s damage, maybe political parties, and especially the federal Liberals and the LNP, can help out?

No propaganda lesson for Trump. Who is better at political propaganda, the North Korean government or US Republican presidential candidate Donald Trump? It looks like North Korea might have outplayed the Trump, rejecting his offer to meet North Korean leader Kim Jong-un. As part of Trump’s bid for the White House, he had previously said that he would meet with the North Koream dictator to try and stop the country’s nuclear weapon program. North Korea’s ambassador to the United Nations has told Reuters that there will be no meeting, and that talk of it is “nonsense”. Ambassador So Se Pyong wasn’t very complimentary of Trump’s offer at all, according to Reuters:

“There is no meaning, no sincerity,” So added.

Even though he’s got no friends in North Korea, Trump is still doing disconcertingly well in the polls.

Rundle: Shorten shows his disregard for Batman by cosying up to coal

Crikey really should examine how being related to Tasmanian Power Broker families plays a major role in someone becoming a Tasmanian Senator, regardless of whether or not that person has demonstrated (even remotely) the qualities desirable before anyone is endowed with such a major political perk.