Another heavyweight business journo leaves Fairfax. And other media tidbits of the day.

Business Day loses another big name. Senior Fairfax business columnist Malcolm Maiden was one of those who put his hand up for voluntary redundancy two weeks ago. His last day is Friday. He’s been with Fairfax since 1980 (when he joined The Australian Financial Review) and has been The Age‘s senior business columnist since 2007. Maiden’s column yesterday was about how technology was making many jobs obsolete.

He’s one of several big departures from Business Day, which include investigative journalist Michael West.

Until two months ago, Business Day had a close relationship with the AFR, publishing much of the same copy. But as part of the most recent Fairfax restructure this was changed, with Business Day operating more as a separate entity, with its own reporters and commentators. It might be difficult to do that with fewer reporters — both Business Day and the Financial Review have lost a lot of staff this redundancy round.

Today another staffer leaving Fairfax with a redundancy, illustrator Rocco Fazzari, has a piece on the ABC on the death of political cartooning. He writes:

“In my time in the profession, 28 years at The Sydney Morning Herald and two at the Canberra Times, I have witnessed at close range the disruption of picas to pixels and, along with the demise of the newspaper, that of the noble profession of cartooning/illustrating to its current tenuous position.

“It seems cost-cutting in the modern newsroom has made the cartoonist an easy target, with Fairfax Media recently making redundant dozens of experienced journalists, myself included.

“More are sadly bound to follow, as clickbait fever runs amok and digital metrics fail to register the beauty of a quirky piece of line work or the cleverness of a metaphor.

“We are a slow-moving target in the crosshairs of management.”

I’m a WA Journalist of the Year, get me out of here. Meanwhile, there is life after Fairfax — at least for some. Jonathan Barrett, who left his role as the AFR’s Perth bureau chief in January, has a new job. From next Monday, he’s joining Reuters as deputy Australia/New Zealand bureau chief.

He will move to Sydney as part of his new gig. It’s a big loss for the Perth media; he won the WA Journalist of the Year award two years in a row in 2014-15. But one local tipster tells us the locals are used to the brain drain, particularly now that the mining boom is over and national outlets are cutting into their Perth newsrooms. Barrett’s far from the first winner to move away.

Steve Pennells, formerly of The West Australian, won 16 WA Media Award gongs between 2003 and 2014, including Journalist of the Year. He’s now mostly based out of Sydney (working for Channel Seven). And Anthony De Ceglie, who won the Journalist of the Year gong in 2012 while at the Sunday Times, has, since March, been working as the Daily Tele’s assistant editor, also based in Sydney. The 2013 Journo of the Year winners, Kirsti Melville and Meri Fatin, are still Perth-based. — Myriam Robin

The takeover battle for Tribune Publishing. The struggle for control over the US print media group, whose papers include the Chicago Tribune and the LA Times, is becoming bizarre with a new player popping up: a Los Angeles-based billionaire. In fact, he is the 34th richest person in America and the wealthiest in Los Angles, according to Forbes magazine; a person who wants his own newspaper.

Patrick Soon-Shiong, a South African-born pharmaceuticals billionaire, has become the second-biggest shareholder in Tribune paying US$70.5 million for a 13% stake at US$15 a share (for 4.7 million shares), which is also the value of the latest offer from Gannett, America’s biggest newspaper owner. Soon-Shiong’s company, Nant Capital will become Tribune’s second-biggest shareholder and he will also join its board as vice-chairman, taking up the role from June 2 (Thursday week, when Tribune’s annual meeting will be held). Forbes says the doctor is worth US$11.8 billion, and all he wants is the LA Times.

That makes him an ally and supporter of Michael Ferro, Tribune’s chairman and biggest shareholder (he also owns the other big Chicago paper, the Sun Times). Ferro owns 5.22 million shares of Tribune Publishing (bought at US$8.50 a share). With the shares to issued to Soon-Shiong, Ferro’s stake in Tribune Publishing has been cut to 14.4%. But the deal effectively creates a 27.3% ownership block backing Ferro and blocking Gannett.

Soon-Shiong told the Financial Times his motivation for the investment was to “ensure the longevity of organisations such as the LA Times”. He plans to embrace virtual reality technology to create new revenue streams for Tribune’s publications, he added. “If you integrate big data, supercomputing and virtual reality with the skill sets of editors and writers, you could create a news network that is unprecedented,” Dr Soon-Shiong said. He is a surgeon and scientist and the FT says he became a billionaire when he invented a drug known as Abraxane, which he sold to US drugs giant, Celgene for US$2.9 billion in 2010. He also holds a 4.5% stake in the Los Angeles Lakers basketball team and has, in the past, bid for the Los Angeles Dodgers baseball team. — Glenn Dyer

Front page of the day. Ever wondered what Shorten would look like blond? 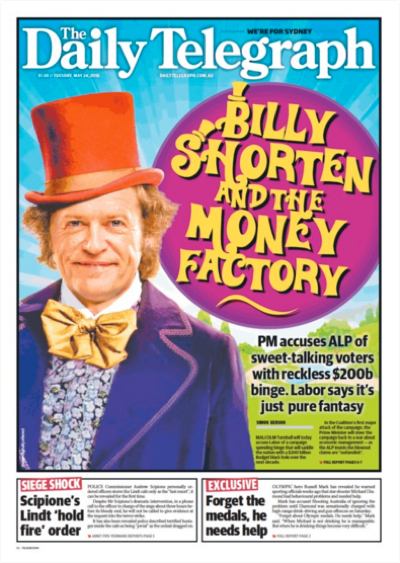 The loss of Michael West is big. That was a bad decision Fairfax, should never have let him go. A lot of cred goes with him.

I’m glad The Saturday seems to be doing so well, it’s easy to find now. More interest in that then the entire 14 sections of the SMH (yes, I know, less than 14)

As for the Tele, what a freaking disgrace that paper is.

No surprise to see The Daily Telegraph resorting to photo-shopped images – even the editor realises reporting (ie: actual text) is their weak point.