Bernard Keane, Crikey politics editor: A definite win for Labor — Health Minister Sussan Ley’s rare honesty in acknowledging what we knew anyway about being rolled on Medicare funding kept the focus on health, where Labor wants it. The focus on Prime Minister Malcolm Turnbull’s continuing poor polling won’t help either.

Paula Matthewson, political commentator and media adviser to John Howard in the 1990s: The Coalition made the mistake of fighting on Labor’s turf yesterday, with Ley admitting she’d rather lift the freeze on Medicare rebates but was prevented by the Treasury boffins from doing so. Labor say it’s OK for their own people to defy the party line (on asylum seekers), but they weren’t about to let Ley get away with a similar move. And the media let them get away with it. Both major parties played the local card, with Opposition Leader Bill Shorten promising buckets of money for Perth’s Metronet while Turnbull appeared with Mr Congeniality, New South Wales Premier Mike Baird, in the hope that some of Baird’s gloss might rub off. As a result, Labor won the day on points, thanks to limited scrutiny from the media. However, the biggest winner was transparency, with the evening’s Four Corners report on political fundraising running the rule over all the parties’ nefarious ways of filling their election coffers.

Simon Cowan, research manager at the Centre for Independent Studies: On a day when Newspoll suggested again that Labor could win the election, the dreaded call went out for the “real Malcolm”. The Coalition are probably hoping for the “real Julia” to reappear, followed closely by the “real Kevin”, anything to distract the Sydney shock jocks from their attacks on Treasurer Scott Morrison’s super changes. As the campaigns moved to health, the clear winner was the Australian Medical Association, followed by Labor and the Liberals, with the taxpayers a distant last. 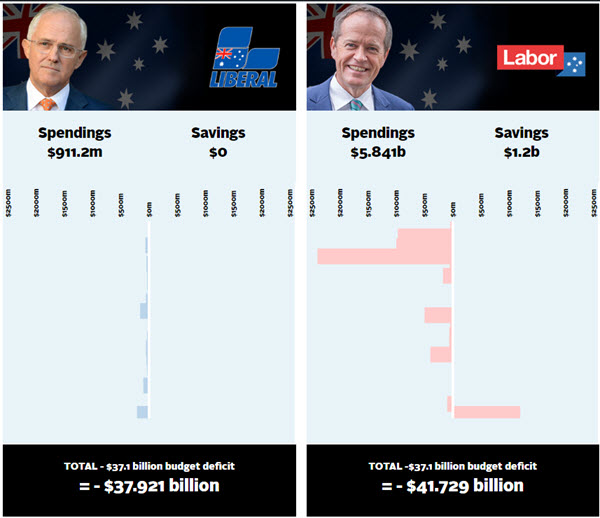 Labor continues to promise big on health while the Coalition focuses on the marginal seat of Corangamite.

Malcolm Turnbull: The PM is campaigning in the marginal seat of Corangamite today, which is held by Liberal MP Sarah Henderson on a 3.94 % margin. Speaking at the Anglesea Surf Lifesaving Club, Turnbull announced $60 million in funding to address mobile phone black spots. He once again spoke about Shorten’s “spend-o-meter”, contrasting the government’s plan for “jobs and growth” with Labor’s supposed fiscal irresponsibility. “The real issue is the flagrant wastefulness and recklessness of the Labor Party outspending us by 20-to-one in this campaign,” he said. “Labor has nothing to say on [driving economic growth] except spend, spend, spend — another turn on the spend-o-meter by Billion-Dollar Bill.” Turnbull will also visit wheel manufacturer Carbon Revolution in Geelong today, where he is expected to discuss the Coalition’s innovation and science agenda.

Bill Shorten: The Opposition Leader will continue to campaign in Perth today and will announce a funding promise of $45 million in road infrastructure spending. Speaking to Nova FM this morning he discussed the car crash that put a hold on his campaign last Thursday: “It happened about 30 meters just behind us. We hear this horrendous crunching noise — anyone who has ever heard a car crash, you know that sickening sound of metal and you know that can’t be good.”

The Greens: Richard Di Natale is continuing his tour of regional NSW today and will be heading to the Barnaby Joyce-held seat of New England. Speaking to Fran Kelly on Radio National Breakfast this morning from Broken Hill, he said the people he had been speaking with were disenfranchised with the Labor-Liberal duopoly and were frustrated with the government’s lack of action on climate change. He also marked management of the Murray-Darling basin as an important issue, key to the health of the economy and jobs in regional Australia. Asked about preferences he said it was an issue that would be left to individual candidates’ offices but ruled out the prospect of the Greens preferencing Liberals.

Goodbye Clive, goodbye, goodbye, goodbye. A year ago he declared he would field candidates in all 150 seats; three years ago he suggested that one day he would be prime minister, but yesterday the leader of the Palmer United Party bowed out of politics — for now. Palmer, having previously ruled out running for re-election in the seat of Fairfax, yesterday said he would not be running for the Senate. After two out of three PUP senators left his party and following the collapse of Queensland Nickel, Palmer will leave Parliament considerably beleaguered. He said yesterday he was looking forward to life after politics: “I want to enjoy my life, play a bit of bowls and have a bit of fun.” He’s hopeful that PUP will continue to be a political force without him …

Turnbull continues to comfortably beat Shorten in media mentions, while Di Natale was big news on radio yesterday getting mentioned 61 times compared to the previous day’s one single mention … 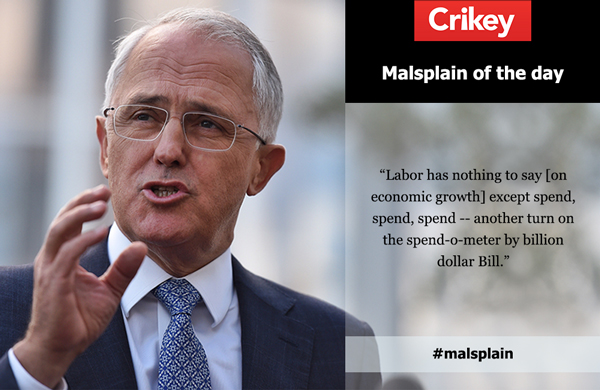 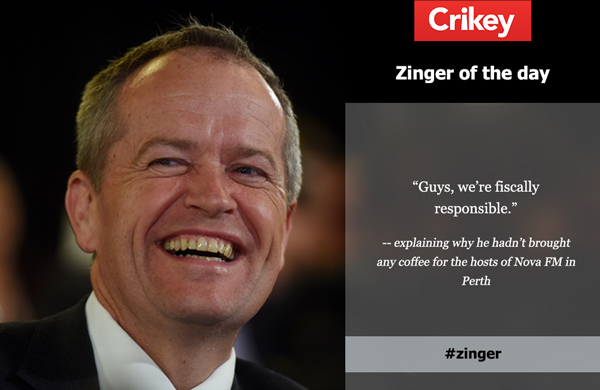 Following the news that Senator Nova Peris is leaving politics, Trish Crossin didn’t hold back in comments made to Sky News’ Matt Cunningham last night. Crossin, whom Peris replaced following Julia Gillard’s “captain’s pick” in 2013, reportedly told Cunningham she was “oscillating between anger and laughter” at the news and that Gillard now owed her an apology …

Not my public statement @mattcunningham but some may well think it’s the right thing to do @dan_bouchier https://t.co/r50GC29HJ8

And Peta Credlin was at it again last night, criticising the PM over his apparent vanity: “Malcolm is a politician that likes to be liked. We all like to be liked, that’s not unusual. But I think the focus on those head-to-head popularity polls over the hours today since it came out misses the main game. The main game inside campaign headquarters is where is the primary.”

Christopher Pyne and Anthony Albanese went head-to-head on Q&A, debating issues ranging from the NBN to Immigration Minister Peter Dutton’s comments on refugees. They each sent a warning tweet before the show went to air …

Limbering up for @QandA with @AlboMP – I’m going to go easy on him. He’s as skittish as a rabbit on Guy Fawkes night #warningtweet

@QandA be warned, @cpyne I’m wearing my @SSFCRABBITOHS tie tonight, it gives special powers to all who wear it loyally #warningtweet

Shorten enjoying a snog with Margo Carey in Adelaide last week made for positive coverage for Labor on the evening news bulletins. Not to be outdone, Turnbull yesterday had his own snogging moment getting up close and personal with a Lagotto called Brando … 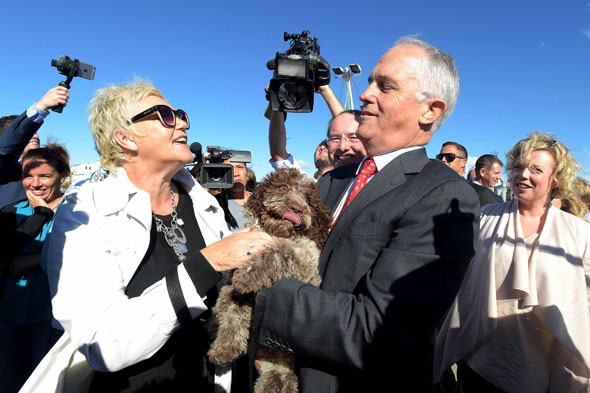 Today we’re turning our back on the Twitterati and bringing you a post from the people’s social media platform: Facebook. A young Tanya Plibersek and a young Bill Shorten urged young voters to enroll to vote yesterday. The woman next to young Bill? That’s the Premier of Queensland, Annastacia Palaszczuk …

Labor’s continued strength when it comes to health, along with Ley’s miscalculated comments, have left the opposition in a good position. Shorten’s campaigning in Perth and Turnbull is in Corangamite.

Crikey Campaign Scorecard: Libs fall into a black hole of their own making

<em>Crikey</em> campaign scorecard: Qld beautiful one day, political the next

Now Peter Dutton is starting to sound rational, I can see that this cognitive dissonance doesn’t just sit with immigration and has now gone over to economic matters as well.