Are we succeeding in curbing suicide?

We've made progress in reducing the number of young men who take their lives, but in other areas the news is not so good, new data from the Australian Bureau of Statistics reveals.

The major parties have come under pressure to announce policies to address Australia’s rate of suicide. While Australia has succeeded in reducing suicide among some key at-risk groups, recent gains are in danger of being lost and there’s a growing problem of suicide among young women, the most recent data on causes of death reveal.

In March, the Australian Bureau of Statistics released its annual data set on causes of death in Australia, which includes statistics on intentional self-harm, giving us an insight into changing patterns around suicide among Australians. 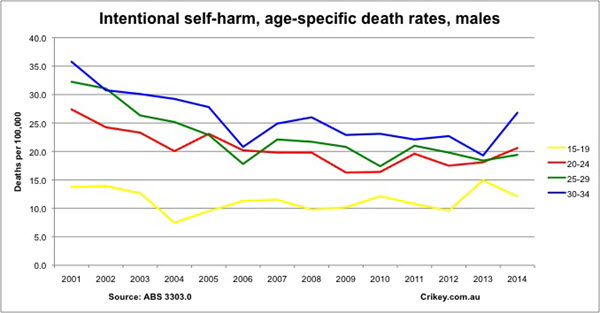 Among other males, however, the news isn’t so good. Men in their 40s kill themselves at about the same rate as in the early part of last decade, and gains made in reducing the suicide rate have disappeared since 2010. Men in their 50s are taking their own lives at substantially higher levels than in 2001, with suicide rates reaching 29 per 100,000, while among older men the news is mixed, with some age groups falling and others rising a little.

Among girls and women, however, the news is almost all bad. Only three five-year female age cohorts have shown declines in suicide rates, and usually by only small amounts; the rest have remained steady since 2001, or risen. Suicide among girls and women aged 15-19 has risen from below four per 100,000 in the early 2000s to over five in 2014. Among women in their early 20s it has risen from four-five per 100,000 15 years ago to over seven, while rates among women in their 40s have also increased.

The dramatically higher proportion of indigenous suicide is reflected in the location of such events: at around 22 per 100,000, “rest of Northern Territory” (i.e. outside the capital city) is the most prolific location for suicide, ahead of “rest of Western Australia” (18.1 per 100,000) and “rest of Queensland” (14.9). Sydney, at 8.3, has the lowest urban death rate from suicide, just ahead of Melbourne (8.6), while Hobart has the worst, at 14.1. In most states, there’s a four-five point gap between capital city suicide rates and non-capital rates.

There’s also been a particularly disturbing increase in the number of children under 15 taking their own lives. The numbers aren’t huge, but growing — it was around 10 in 2005, but is now over 20. Suicide among boys has remained steady (there was an unexplained spike in 2013, but the number fell again in 2014) but suicide among girls has gone from being virtually non-existent to 15 in 2015. While the lack of data prevents an accurate assessment, this appears to be driven by child suicide in indigenous communities. Between 2010-14 there were 22 suicides in the five-17 age cohort (that’s slightly different to the numbers quoted above) in “rest of NT” and 28 in “rest of WA” compared to 48 in Sydney, 54 in Melbourne and 43 in Brisbane, a terrifying result given the vastly different population sizes involved.

Whether, as some have speculated, the rise of social media and the way it facilitates bullying may be playing a role in the suicide of girls and young women isn’t clear. However, child suicide in indigenous communities is clearly an emerging problem.

What’s not explained in the numbers, of course, and will never be conveyed in any statistics, is the loss and grief of the now nearly 3000 suicides in Australia each year: each one a person loved and now missed, each one a sibling, a child or parent, a husband or wife, a brother or sister, a friend, each one a cherished face gone from a life they couldn’t face continuing.

I work in mental health and the amount of teenaged girls who are engaging in non-suicidal self injury (which dramatically heightens the likelihood of suicide down the track) is astounding. Just this week we have had 2 mid-teen girls who cannot get out of bed due to skyrocketing anxiety. My own 15 year old is on anti-anxiety meds and my 21 year old (both girls) on anti-depressants. They have such a sense of hopelessness about their future jobs, capacity to buy a home, environmental destruction from global warming. Is it any wonder?

With all this data, why has the government cut funding to Headspace?
I saw Malco
lm Turnbull gibbering about suicide rates this morning, about what a great job Headspace does. Of course to continue this work it will be with a lot less money.
What a hypocrite! If it weren’t for this organization, my grandson would be dead!
How many more suicides are needed before aid groups are funded properly?
Stop funding coal mines, CSG and giving the wealthy more tax cuts, this will help to pay for the really important things like health ,including mental health.

Yes Jenny. Suicide is a spiritual indictment upon any community in which it exists. Unemployment, education curriculum, destruction of the family unit, and gender division are just a few more root causes leading to the root cause of all root causes. Govt. Just yesterday I walked passed a young man coming out of the local Centrelink office. He was cursing and shouting as he smashed his hand on the bonnet of a car and then threw some object at a truck across the road as he invited the driver to come out and fight. I asked him what’s up cuz. He said a Centrelink glitch, not his words, had cost him a delay in payment for 3 weeks and he had no money to even buy food. Can it get any more soul destroying?

Thank you Sally. My 21 year old came home after working in orphanages in Nepal earlier this year and was unable to get any money from Centrelink despite lodging her application in January. My ex husband and I had to completely fund her existence until she found a new job. Despite her having worked since she finished high school, she was deemed unfit to get any sort of payment whatsoever. Thank goodness we could afford to support her, what would happen to anyone without a family who could? Oh yes, slip through the cracks and end up living on the street. The trajectory of this society we live in must be altered.

Any suicide is certainly something we need to to our utmost to prevent and all the issues raised are alarming.

I also mention lesbian, gay, bisexual, intersex and trans people face rates up to 40 times that of the population overall and often face lack of understanding (to put it mildly) from health professionals.
I would be happy to discuss this further with Crikey.

I’ve learnt from quite a few people about how campaigns have helped individuals. What doesn’t receive much quality analysis in any of the media however [including capitalist entities such as Crikey] is how so many of our campaigns by genuinely motivated activists which are then pushed incompetently by Faux Progressives cliques can end up actually exacerbate situations.