Rebels outside HWT building. Both Melbourne dailies plastered their front pages this morning with the news that slain gangland lawyer Joe Acquaro had connections with federal Liberal MPs, but it’s the bikies they need to worry about. Staff in Melbourne were given this warning this morning: 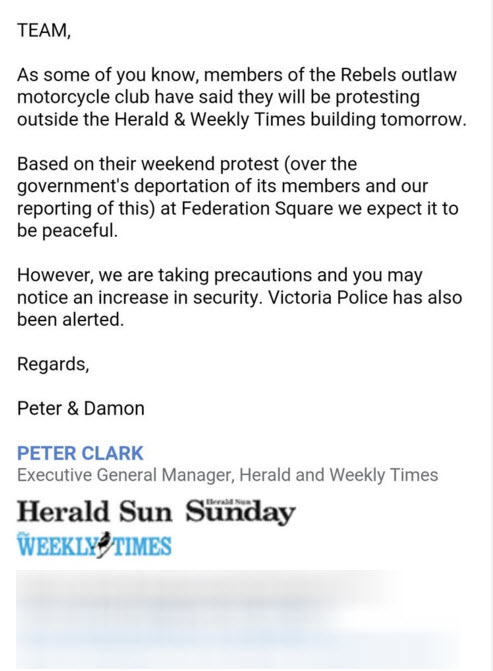 Cutting a rug. The campaign trail is long and can take its toll, but one tipster saw Greens leader Richard Di Natale blowing off steam on the weekend:

Thanks for those three questions, Joe. Fairfax reporter and Crikey alumnus Matthew Knott has noticed a trend already as we enter week three of the election, where Opposition Leader Bill Shorten will be asked questions by The Australian’s Joe Kelly and will respond the same way. We’ve found three instances so far. Is it becoming a trend?

JOURNALIST: Would a Labor Government commit to funding the Safe Schools program post 2017? Would you keep the changes Education Minister Simon Birmingham has made and would you support closing the religious exemptions on anti-discrimination laws?

JOURNALIST: When he is in Canberra, David Feeney stays at a unit that is owned through the family trust of his wife. He hasn’t specifically listed or declared the unit, he has declared the family trust. Are you confident that he’s met his obligations? Were you aware of the unit and have you stayed there?

JOURNALIST: Mr Shorten, how do you justify politicians claiming the cost of staying in Canberra as a tax deduction? Do you do that? Would you commit to tightening or stopping that practice if you win government?

‘Courge’ under fire. Not many tipsters have shared their correspondence from their local MPs and candidates yet, but with 40 days to go until we hit the polls, there’s lots of time left. After we reported on former Liberal MP Dennis Jensen’s doorknocking efforts last week, one reader shared this picture of Jensen’s campaign material. He uses the Liberals’ blue and yellow colours — but a spellchecker might also be needed: 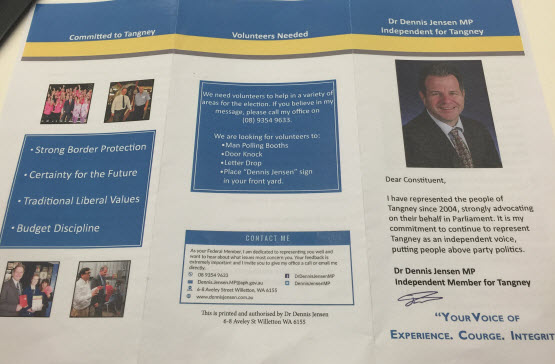 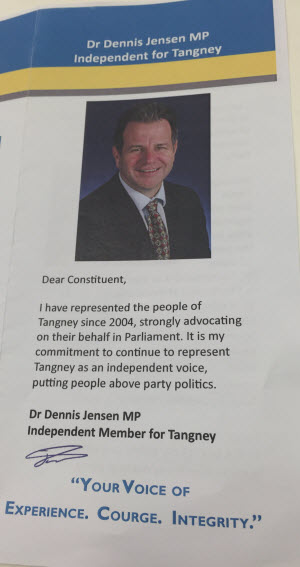 Tony’s here, shhhhh. Former prime minister Tony Abbott is on the campaign trail, but he’s a bit touchy about who knows about it. According to the Daily Liberal in Dubbo (not a party paper), reporters were originally told they couldn’t report on Abbott’s activities in the regional city late last week:

“Mr Abbott is due to arrive in Dubbo by plane sometime on Thursday afternoon.

It is understood he could visit the Dubbo Community Men’s Shed in Victoria Park before the fundraising dinner at the Dubbo RSL Memorial Club.

He also may still meet with young students who are part of the Clontarf Foundation on Friday morning before leaving Dubbo.

The media were told on Thursday morning they would not have access to Mr Abbott while he was in town.

Mr Abbott, who lead the Coalition to power in the 2013 election will talk about his experience while in office.”

The unbylined piece didn’t hide the paper’s feelings about being snubbed by Abbott, and the next day they were offered a “short interview”. Abbott was in town in support of Nationals MP Mark Coulton, attending a fundraising dinner for the Nationals whip at the local RSL. It’s not clear why Abbott was trying to keep the visit on the downlow.

Mmmmm, delicious NBN. It’s been a big week for the NBN, but a tipster has got in touch with an issue that has whiskers and a long tail:

“Several NBN technicians in a recent short course told others that the cable cover being used by NBN has a corn component and the rats love it.”

Too corny to be true? We asked NBN and they told us there is no corn component in the cabling sheaths. Time for an AFP raid?

The enemy of my enemy? If the position of The Australian on marriage equality was ever in doubt, this post from the Australian Marriage Forum should clear that up. 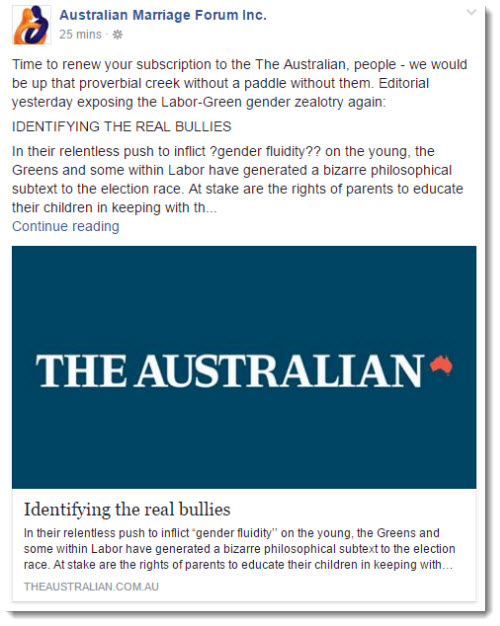 They’re keen to get people to subscribe, but also copy and paste paywalled articles into freely accessible posts. So, not so committed then?

Dope new study examines how we can tackle bikies

In languid and broken Maryborough, a microcosm of Queensland’s problems