The Australian's Paul Kelly once slammed Andrew Peacock over what could be construed as anti-immigrant sentiment. How times have changed.

The more opinion, the less it matters. The anti-immigration genie is out of the bottle in this federal election campaign, and it seems nothing can stop it.

There was a time in Australian politics — albeit a brief time between the end of the White Australia policy and the advent of Pauline Hanson — when the major parties, by and large, avoided exploiting anti-immigration sentiment for political gain.

The kind of political gambit we’ve seen from Peter Dutton this week — in which he warned about the costs of “illiterate” and “innumerate” refugees to the Australian community — once would have earned the ire of the likes of The Australian. Times have changed, with key moments including the Tampa crisis, Labor’s flip-flopping over strategy, and Tony Abbott’s simple but effective “stop the boats” mantra.

But back in 1990, Liberal leader Andrew Peacock was dealt what was believed to be a devastating blow by The Australian’s Paul Kelly, for a much gentler jibe at immigrants.

In the lead-up to election day, Peacock, trying to dislodge formidable PM Bob Hawke, expressed fears that the MFP concept (multi:function polis, a popular idea at the time) would lead to an Asian “enclave” being established in Australia.

In a front-page takedown under the heading, “Peacock: A Danger in The Lodge”, Kelly wrote:

“Mr Peacock has stooped to exploit immigration fears and anti Japanese sentiment in a way which suggests that Australia’s national interests are best preserved by keeping Mr Peacock in opposition.” 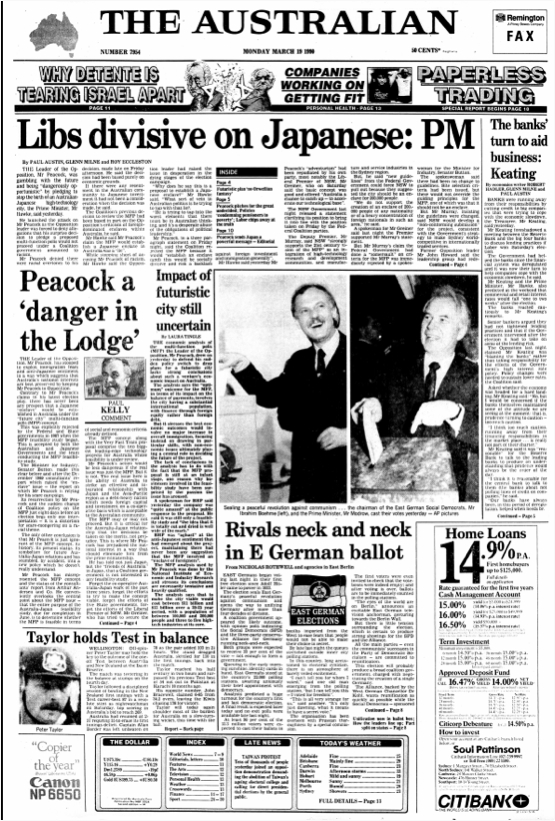 “I’ll get you after the election. I’ll deal with you in another forum, you bastard, because I don’t deal with cowards.”

In a piece in The Fifth Estate, published 12 years ago by RMIT Journalism, veteran journalist Max Suich noted that it’s hard to believe now that a comment piece in a newspaper on this issue could have damaged a leader’s campaign.

“The curious fact is that as opinion becomes both noisier and ubiquitous its influence declines,” he said.

You can read Suich’s analysis here – it still holds up. — David Washington in InDaily

Taylor up. The Guardian Australia has appointed its third editor in three years — and this time, it’s a local.

Political editor Lenore Taylor, previously a long-standing Fairfax journalist, has been announced as the newest editor of the title.

Emily Wilson, the editor who took over from founding editor (now global editor-in-chief) Katharine Viner, is heading back the UK, where she will be assistant editor of The Guardian, leading coverage of global topics. Both former editors were brought to Australia from the London HQ, making Taylor the first home-grown editor of the title.

In an email to staff, Viner said Taylor, a dual-Walkley winner who joined in May 2013, had had a “stellar three years on the edition bringing in attention-grabbing scoops, astute analysis and wide recognition for the Guardian on TV and radio”.

“Lenore is a multi-award-winning political journalist and former foreign correspondent, and she is the ideal person to take Guardian Australia to its next stage of development.”

Viner also paid tribute to Wilson, who she said had grown the Guardian Australia’s monthly unique browsers 40% in two years.

In a statement, Taylor said:

“The opportunity to lead Guardian Australia is a huge honour. We’ve come so far in just three years and my aim is to expand our quality, independent coverage of all the issues that are important to our readers. I’m following two inspiring editors in Katharine Viner and Emily Wilson and I have the great privilege of leading a dedicated and talented team.”

Taylor will lead a team that’s been insulated from the cuts taking place at the parent organisaton — while the London office looks for 250 redundancies, Wilson said in January that the Australian team, as well as that in America, would not be targeted. The cuts in London have started to cut deep. Last week, Press Gazette reported The Guardian was breaking up its six-person-strong investigative journalism team, with most of its reporters absorbed back into the general newsroom. It also suggested The Guardian was becoming more risk adverse with investigation — a claim strongly disputed by a Guardian spokesperson.

Taylor is not the first Australian to head up one of The Guardian‘s three local sites. Lee Glendinning, who was deputy editor of the Guardian Australia at launch, followed Viner to the United States when the former Australian editor took over the operation there. Glendinning, another former Fairfax journalist, succeeded Viner as US editor in June last year. — Myriam Robin

Not corrupt, but articles stay up. Fairfax’s lawyers on Friday settled a long-running defamation case with Nick Di Girolamo after the businessman and lawyer filed a notice of discontinuance in court on Friday.

Fairfax’s barrister, Tom Blackburn, said in a statement to the court that the articles “did not say … and did not intend to say that Mr Nicholas Di Girolamo was corrupt”.

The settlement came swiftly after The Sydney Morning Herald‘s Kate McClymont, one of three journalists who wrote the articles contested (the others being Linton Besser, now with the ABC, and state political editor Sean Nicholls), took the stand. In comments to his own paper, SMH editor-in-chief Darren Goodsir said he was “very happy” with proceedings and the fact that “these important pieces of journalism remain on the public record”. Despite the Oz stating this morning that Girolamo got a “six-figure” settlement, Crikey is told the settlement is being viewed as a win at Fairfax. The case was costing the company $20,000 a day. — Myriam Robin

Sliding doors. When he was appointed communications minister, Malcolm Turnbull always said if he’d had his way, he wouldn’t have undertaken the re-nationalisation of Australian internet infrastructure with the NBN policy, and it’s clear that many in the Coalition would rather the government wasn’t lumbered with the largest infrastructure project in Australia.

Interestingly, this is the view now proffered by Evan Mulholland, former communications adviser to Comms Minister Mitch Fifield (he left that office very recently). Mulholland writes his first op-ed in The Australian today in his new role for the IPA — fillings its ranks after losing James Paterson to the Senate — in which he states that Labor would have been better off contracting out the NBN fibre-to-the-node policy as the party had planned in 2007 rather than embarking on the NBN.

It’s an interesting view from someone fresh out of the minister’s office into what might be a reluctant policy for the government, especially this week after the AFP raids. The problem is that Mulholland misses one of the major reasons why Labor embarked on the NBN in 2009 — Telstra, as the company to do the upgrades, wasn’t playing ball. Back then the management under Sol Trujillo was much less… malleable … than it is today, and that’s still saying a lot. — Josh Taylor

Baby saves the day. As Turnbull’s prime ministership faces its first public test, both Media Watch and The Australian have remarked on how little the PM has appeared on 2GB, a favourite of his predecessor Tony Abbott. Well, the drought is over, the Daily Tele proclaimed on Saturday. Apparently the Prime Minister and Alan Jones have buried the hatchet, with Turnbull agreeing to appear on Jones’ show this Wednesday, for the first time in two years.

Turnbull as good as confirmed the story when asked about it on Saturday, saying he’d had a “very good” discussion and that he was “looking forward to appearing on his radio program”.

According to the Tele, the peace deal was negotiated by property tycoon John Boyd at his penthouse last week. The four-hour lunch initially looked like it was about to end early, with Turnbull and Jones at each others’ throats. And then someone had the idea of sending in Boyd’s wife, Marly Boyd, and and the couple’s year-old baby. After that, the “dynamic changed”, a source told the paper. Which shows that if you’re going to bring two warring parties together, it helps to have a baby on hand. — Myriam Robin

The five-year agreement includes MasterChef Australia, The Bachelor Australia, Offspring, Formula One and the KFC Big Bash League, and starts on July 1. Regional viewers wanting to keep up with MasterChef will have to remember to switch the dial.

Under the new deal, WIN will pay Ten a higher affiliation fee than that currently paid under Ten’s existing regional program supply agreements. The new deal should result in a boost for Ten’s programs with higher audiences in the regions because of WIN’s wider broadcast footprint across the country. That will not only benefit the headline programs like MasterChef, but also Ten news and The Project.

Nine’s regional penetration will fall with Southern Cross as its partner because it has a smaller broadcast footprint than WIN.

Video of the day. The Courier Mail‘s Dennis Atkins explains what a “dank meme” is … 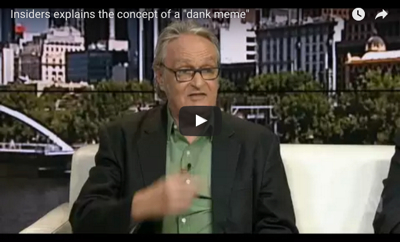 The more opinion, the less it matters

“The anti-immigration genie is out of the bottle ”

And a big thanks to John Howard for that one. Nice work John, it’ll take us another generation, if we’re lucky, to put the genie back in the bottle. Hope you’re sitting at home ‘relaxed and comfortable’.

Re the NBN, you’re exactly right. The ‘re-nationalisation’ of internet infrastructure was necessary due to Kim Beazley’s disastrous policy deliberations, and John Howard entrenching that by selling it off. The NBN plan killed off a batch of huge problems that were created from that one policy error, as well as giving us national infrastructure for the next century. Of course, very few seemed to notice that at the time, as there wasn’t a 3 word slogan for ‘fixing up the f#%&-ups from the past decade and a half’

“Dank meme”? He reckons the present troubles in the Middle East had nothing worth mention to do with the Coalition of the Willing’s foray into Iraq and that the US invaded on their Pat Malone?