Sky News says it wasn't tipped off about the raid about to happen -- it just used good old-fashioned hustle.

When the Australian Federal Police raided the office of a Labor senator and a staffer’s home last night, images of the search as it was underway were quickly put to air on Sky News. Were the media alerted, and if so, what does this say about the AFP, acting in this manner in the middle of an election campaign?

Crikey asked the AFP this morning whether the media had been alerted to the raids. The department referred us to public statements, which didn’t answer our questions. However, questioned by journalists this morning, AFP commissioner Andrew Colvin did say:

The earliest images of the raids were aired on Sky leading to social media speculation that the network had been tipped off. But newsroom sources tell Crikey that wasn’t the result of any alert — just good old-fashioned first-person reporting. 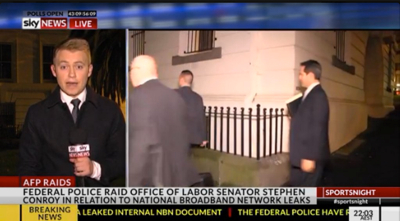 Sky’s Jackson Williams during a live cross outside the CPO

The news broke first on the ABC’s 7.30, when federal Labor finance spokesman Tony Burke said a raid was currently under way.

Watching this in Sydney, executive editor Rob Raschke quickly asked a young video journalist from Melbourne, Jackson Williams, to see what he could get. Williams rushed to the scene — the Commonwealth Parliamentary Offices, where Senator Stephen Conroy keeps his office. He set up his equipment and filmed police searching and later leaving the building. He conducted several live crosses from the scene. Startlingly, Williams was alone over the 25 minute or so he was there — no other media had sent anyone to the building. Senior people within Sky are singing his praises this morning.

“We didn’t get any tip off — Jackson just did a great job,” Raschke told Crikey. “It was in the public domain and he chased it.”

Later, other media would also rush to Brunswick to film police in the middle of raiding the house of a staffer. Channel Nine, for example, extensively filmed police in Brunswick. But those Crikey spoke to said there had been no alert. In the highly public raids, information on where the police were going next was widely available. TV stations chased the raids — rather than being alerted.

“The timing [of the raids] was not quite simultaneous so there was time to get to the house after the office was raided,” said a reporter at another outlet. The more interesting question, perhaps, isn’t whether or not the AFP alerted the media, but why they staggered the raids in the manner they did.

“..“We didn’t get any tip off — Jackson just did a great job,” Raschke told Crikey. “It was in the public domain and he chased it.”

Later, other media would also rush to Brunswick to film police in the middle of raiding the house of a staffer. Channel Nine, for example, extensively filmed police in Brunswick.
..”
Public domain? including ‘staffers’ address?
Unlikely.
There were leaks methinks..Loose lips somewhere!?