The beginning of the campaign was all education, healthcare, negative gearing and badly behaved banks. That's Labor territory -- so it took a far-right Abbottista to bring the conversation back to solid Coalition ground, writes former John Howard media adviser Paula Matthewson.

It might have been during the televised “People’s Forum” last week that the penny dropped with Coalition strategists. Almost every question from the self-described unaligned voters was about the issues on which Labor had been campaigning: negative gearing, banks, health and education.

In one respect, this was unsurprising, given the audience was from western Sydney, but the line of questioning placed the PM in a predominantly defensive position. And it left him little room to spruik the benefits of the Coalition’s jobs and growth agenda.

To compound the matter, there were no questions at all on asylum seekers or terrorism, robbing Turnbull of the opportunity to talk about the government’s only other big draw card: national security.

This would have been of some concern to the Turnbull camp. How would voters know that only a Coalition government was capable of protecting them if the PM didn’t get the chance to remind them about this key point of differentiation with Labor?

Clearly, last week’s efforts to amplify the voices of dissent within Labor about offshore detention had not been enough to increase voter concern about the opposition being soft on boats/borders/terrorism. Not according to the latest round of opinion polls, anyway.

So campaign strategists sent the PM to Darwin to hold a disappointingly flag-free press conference in front of an Australian Border Force patrol boat, to accuse Labor MPs and candidates of “crab-walking away” from strong border protection “in the direction of the Greens”.

Who knows whether the PM’s not-exactly-subtle intervention would have been enough to get asylum seekers pinging again on voters’ radars?

For who should come bumbling across our scopes but Mr Keystone Cop himself, Immigration Minister Peter Dutton.

Clearly not satisfied with the PM’s effort, or perhaps encouraged by the other Abbott supporters in his “monkey pod” lunch group, Dutton decided to double down on the issue.

Seizing on Labor and the Greens’ election policies to significantly increase Australia’s refugee intake, Dutton decided to hit every potential hot button in the hope of setting off at least one negative response from voters.

While voters consistently say asylum seekers are a low-order issue for them, the matter is not quite so clear-cut. Asylum seekers, refugees and even immigration more broadly can also serve as proxies for issues that are of greater concern to voters such as the economy, housing and yes, job security.

So it is no surprise that Peter Dutton, the man who makes his predecessor, Sledgehammer Morrison, look like a skilled orator, stepped up the election rhetoric on asylum seekers by simultaneously claiming they would languish on our dole queues and take our jobs.

As serendipity would have it, Dutton’s associate in the Abbott fan club, Peta Credlin, chimed in after the Immigration Minister, making similar comments about the economic burden of dramatically increasing Australia’s humanitarian intake.

It was almost as if the Abbott camp decided to take matters into its own hands, wresting the election campaign agenda back on to familiar territory so that the Coalition could regain a dominant position. This approach has been described as a dead-cat strategy, favoured in the past by Coalition strategists.

While it is undoubtedly a Machiavellian interpretation of events to suggest Dutton was encouraged by the Abbottistas to go hard on refugees, it may explain the Prime Minister’s reluctance to denounce Dutton’s behaviour.

Turnbull clearly acquiesced to the border protection hawks within the government when he called Dutton an “outstanding minister” and offered a more genteel version of Dutton’s spray.

On Thursday the PM even invoked our first Repeller of the Asylum Seekers, John Howard, saying part of the foundation of our success as a multicultural society was for Australians to know the government they elect determines “who comes to Australia” rather than “outsourcing” immigration policy to people smugglers, “which is what the Labor Party did”.

However, the PM may have felt he had no other choice. He can hardly be seen to be going soft on asylum seekers/refugees when this is a key point of attack being used against Labor.

What’s more, according one opinion poll at least, a clear majority of voters seem to be on Dutton’s side. Around 60% of respondents to the poll, taken in recent days, agreed that Australia’s immigration intake has been too high and that we should not increase our humanitarian intake because of the refugee crisis in Europe. 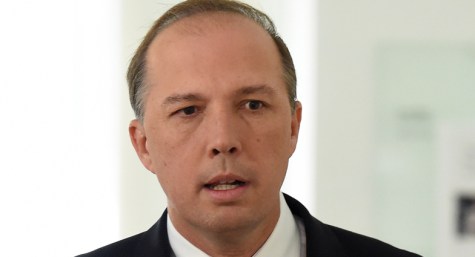 Do refugees take our jerbs? No, they create new ones.

Maybe when Turnbull said Dutton was an ‘outstanding’ minister, he mean ‘egregious’.

Maybe so Steve, but remember Turnbull said that Abbott was a great prime minister. I think from that point on Turnbull became the honourable member for La La Land.

Oh for the good old daze of “Children Overboard”?

It’s certainly a great time to be a narrow-minded bigot in Australia.

Apart from the dog whistle component of Dutton’s remarks, this whole fake controversy has diverted attention away from the implications of the PNG Supreme Court decision that the holding of the asylum seekers on Manus (and I would argue by extension on Nauru) was illegal. The PNG government has since opened the gates, but that is only a partial solution. According to the Lowy Institute’s Interpreter blogsite there have been high level negotiations between the Australian and PNG governments, but we the tax paying public are not told what they are or what they are intended to achieve.
Ferrovial has said it is no longer offering its security services as they are illegal. Dutton made his customarily ignorant response, but again, the questions that raises are left unaddressed.
The simple fact is our existing asylum policies are a dog’s breakfast, and both Labor and the Coalition know it. Hence the tacit agreement not to respond, as they should, to the Court’s orders.
That is simply not good enough. The media, and that includes Crikey, should be demanding answers.

Australia cannot force refugees to stay in PNG anymore than we can say they can’t go to New Zealand. We don’t own them, they are free people with free rights.