‘Rampant sexism’. The University of Sydney has responded to the controversy surrounding the treatment of female students at its colleges in an email to alumni. Vice-chancellor Michael Spence acknowledged media reports, from ABC’s 7.30 and student press, that revealed practices at the prestigious Wesley College, described as “rampant sexism” by students. Spence wrote that the university was addressing the reports:

“Some of you may have read stories in the media recently about incidents of sexual harassment and assault with members of the University community. It is deeply concerning and saddening to hear of these accounts and I wanted to keep you informed of the University’s action to address these problems.”

It included damning statistics from a survey of students conducted last year, which found that almost 25% of students didn’t feel safe on campus:

Spence wrote that the university was acting on recommendations from the survey, including a complaints portal and making students “aware of their responsibilities as stipulated in the student Code of Conduct”.

“In addition the Chancellor and I have invited some of the independent colleges affiliated with the University to work with us and with former sex discrimination commissioner Elizabeth Broderick AO on how to respond to concerns that have been raised about their culture.”

Don’t try this at home (or do — they can’t stop you). Commercial solariums have been banned in most states in Australia for many years, but they are still available for use at home. A tipster was shocked to see this advertisement on Instagram this week, with the company offering users the chance to buy a solarium for their homes — and yes, it is still legal to sell the machines. The Victorian government has promised to crack down on illegal operators, but there’s not much that can be done about this. 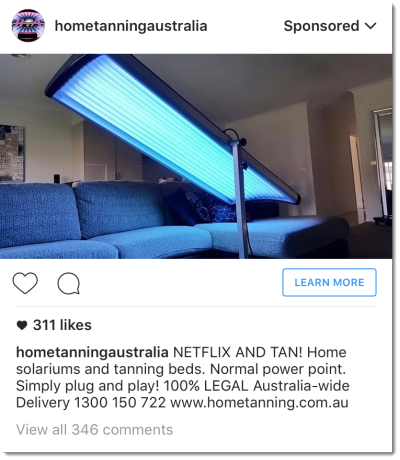 Heeeeeeere’s Johnny. A tipster tells us that former prime minister John Howard has been spotted in Cairns and wondered why the media hadn’t reported on him campaigning. It’s because he’s not campaigning (well, not officially). Howard is soaking up the rays in the far north at a conference of real estate agents, as keynote speaker at the First National Real Estate Convention in Cairns. With current PM Malcolm Turnbull telling the people’s forum in Sydney last week that we should be listening to real estate agents as part of his attack on Labor’s negative gearing policy, there’s little doubt what the topic of conversation was. 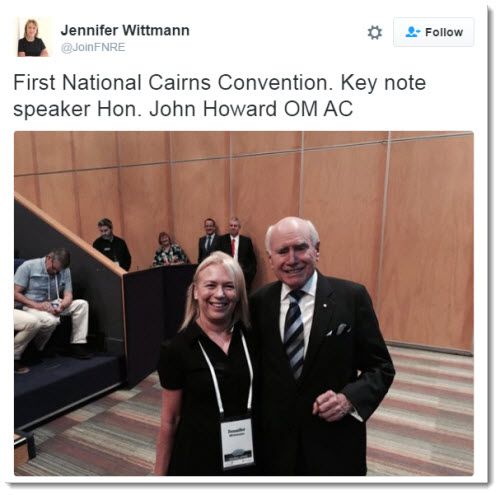 Business booms for Trump Corp. There’s Donald Trump sparkling wine, bottled water, marbled steaks and even licensed mattresses. There are the hotels, resorts and golf courses. And the new book, of course, Crippled America, published in November of last year. And all those “Make America Great Again” hats. Apparently, America can’t get enough of it all.

An analysis by The Washington Post of financial disclosure forms shows business is booming while Trump runs for president. Revenues at Trump National Doral, a four-course golf complex in Florida, went from $69 million to $183 million year-to-year, according to his disclosures. Other courses in Florida and New Jersey had revenue increase significantly. His Florida resort, Mar-a-Lago, almost doubled earnings since the start of his controversial campaign. Bottled water brand Trump Ice has been racing out of refrigerators, with revenue jumping 68% over last year. The book has earned up to $7 million in royalties, he reported.

Overall, Trump reported $501 million in business revenue on his 2014 statement — and $771 million for a shorter period of time covering his presidential campaign in a statement released this week. Trump, naturally, says he’s “proud” to file “the largest [statement] in the history of the FEC [Federal Election Commission]” (though the FEC wouldn’t confirm that). Imagine how much he could rake in from the White House …

War chest at work. As we continue to publish correspondence from political parties and candidates, a tipster received these fliers this morning outside Melbourne’s Flinders Street station. They were’t from a candidate or party, though, but another major political player: trade unions. The CPSU is part of the bigger “put the Liberals last” campaign, using the CSIRO and Medicare to attack the government. 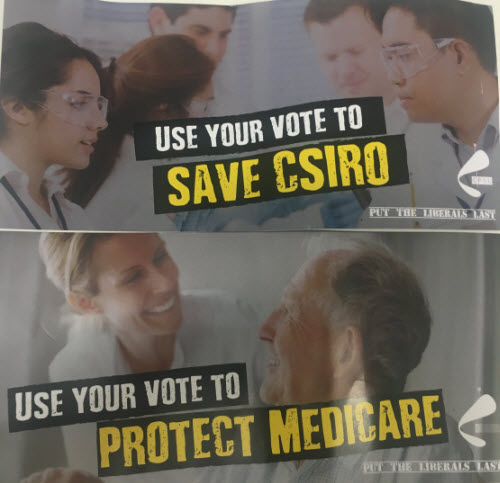 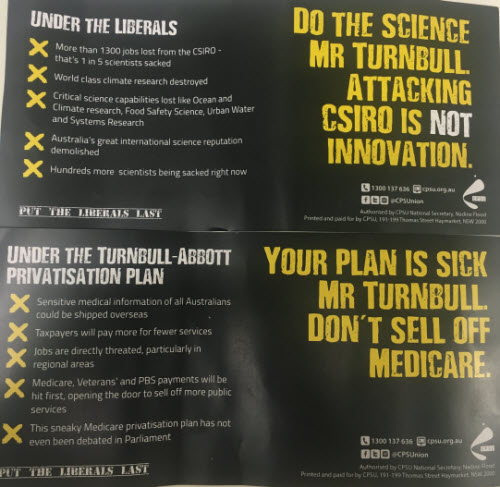 The unions’ involvement in the Victorian election made a significant difference for Labor’s Daniel Andrews. What effect will they have this time around?

Print ain’t going anywhere: News Corp. Yesterday, Crikey published a tip about how News Corp was adapting to smaller print runs. At the end of it, we said News Corp’s print rooms were now convinced the papers would cease publishing daily papers at the end of 2017. We didn’t put the suggestion to News Corp before we published, because we figured it was only a rumour and (as we pointed out) News Corp remains very committed to its print papers. But after deadline, a spokesman got in touch to say: “Yesterday Crikey published the rumour that News Corp Australia may cease publishing its daily metro titles at the end of next year. This is untrue.”

A short history of groundbreaking climate reports we pretty much ignored

I had the misfortune to reside at one of the Sydney Uni colleges for a year in 1986. St Misogynists (Andrews). It was all male then, but with a vigorous culture of extreme sexism and “fresher initiation” into their stupid and pathetic ways. Long story short, the federal minister for education (Susan Ryan, friend of my mother’s) called the college principal for a good blocking and to discuss funding. The nuttiness eased off for a about a week tops. Even though it’s now thankfully co-ed, the culture of these places changes little fundamentally, and if anything it’s retreated further up the socio-economic ladder too, drawing from a dwindling supply of similarly backgrounded little snots. I think the university should shut them down and turn them into regular, civilised student accommodation.

Having enjoyed the good fortune to be in contact with University students from the 1950s onwards, including being a Guidance Officer with Commonwealth Scholarship and Teachers Scholarship holders in the 1960s, and Lecturer in the 1970s, I can confirm there were many twits on campuses.
But they wer4e far more competent than most of those now said to be involved in ‘university education’.