Even though everyone knows the story, lifting the injunction would lead to another round of coverage, Britain's Supreme Court has ruled.

The UK Supreme Court last night ruled to uphold an injunction against The Sun on Sunday, and all the rest of the British press, to prevent publication of a “prurient” story regarding a high-profile married entertainer who had been involved in a potentially embarrassing sexual encounter in 2009.

The upholding of the injunction overrules an earlier decision from the Court of Appeal that it should be dropped — given that the information, widely available online, could no longer be considered confidential.

“It would involve not merely disclosure of names and generalised description of the nature of the sexual activities involved, but the most intimate details.

“This would be likely to add greatly and on a potentially enduring basis to the intrusiveness and distress felt by the appellant, his partner and, by way of increased media attention now and/or in the future, their children.”

“In this case I have reached a clear view that the story’s confidentiality has become so porous that the idea of it still remaining secret in a meaningful sense is illusory. One it has become readily available to anyone who wants to know it, it has lost the essence of confidentiality.”

The case is one of several injunctions that have gagged the British media from reporting on high-profile celebrities in recent months. Fleet Street has bitterly complained about the injunctions. Readers might remember the Daily Mail‘s recent “The Law is an Ass” front page … 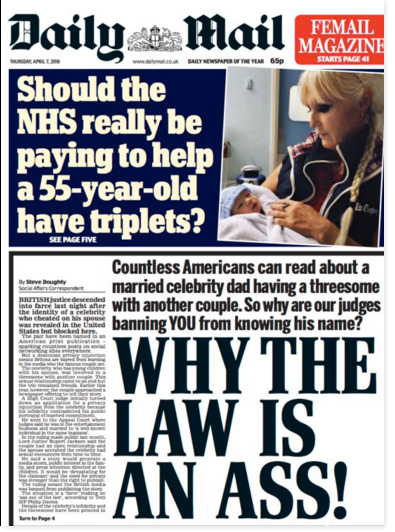 The decision to uphold the injunction on The Sun has been slammed by the executive director of the British Society of Editors Bob Satchwell, who said:

“This is not just about the private lives of celebrities, it is about principles and practicalities. It is wrong that people in England and Wales cannot read in the media of their choice whatever everyone else in the world knows already.

“In practical terms, as Lord Justice Jackson said in the appeal court, the court should not make orders which are ineffective. Apart from bringing the courts and the law into disrepute, injunctions are an expensive waste of rich people’s money and of the courts’ time. The courts are overwhelmed with other important work and today’s judgment may well encourage greater use of injunctions.”

Crikey has, on legal advice, chosen not to name the celebrity, even though we aren’t based in the United Kingdom. We’re abiding by its laws anyway as, given we can be accessed from the UK, it’s possible authorities there could put out a warrant for your correspondent, her editor, or the owners of this publication, which would come up should we ever fly through a British airport. If you do want to know who the injunction refers to, it’s easy to find out.

Our political editor Bernard Keane recently received a legal notice from Twitter informing him that the social media network had received “legal correspondence” about one of his tweets — a somewhat cryptic reference made a few months back to the subject of the injunction on an article about injunctions.

“The complainant requests that the following Tweet, allegedly in violation of local law in the UK, be removed immediately from your account,” the email from Twitter states.

Keane has advised Twitter that, given no Australian or US laws have been breached, he won’t be complying, and he tweeted to that effect, appending the original tweet.

The death of Homo Economicus: how neoliberalism fuelled the rise of identity politics